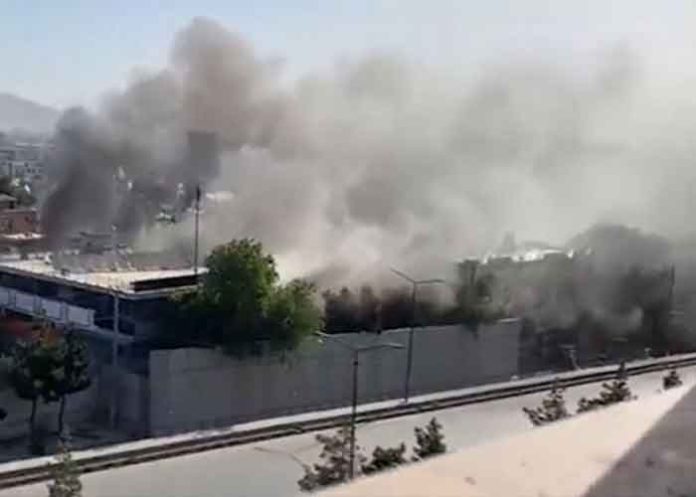 Kabul: At least two civilians were killed and three security personnel injured after three explosions ripped through a gurdwara in Kabul Saturday, according to multiple sources.

The Ministry of Interior have confirmed the blasts and said a group of armed insurgents entered the gurdwara in Kart-e-Parwan area.

“Before entering, the enemy attacked the guards with a grenade, which caused a fire, and two of our Hindu compatriots, who were injured in the attack, were evacuated and taken to hospital for treatment,” the Ministry said in a statement.

According to the statement, a car bomb was also detonated by the insurgents before it reached its target.

“Fortunately, they did not reach their target and detonated a car bomb before reaching the target.”

Meanwhile, a witness told Xinhua news agency: “We heard a huge blast which struck the gate of the temple at around 6 a.m. The blast was followed by two more explosions inside the temple.”

The security forces have cordoned off the area for precautionary measures, and several warning shots were also fired, he said.

A security source told Xinhua that the two people were killed during the first blast.

Videos on social media showed smoke billowing from the two-storey gurdwara which is surrounded by blast walls.

Mediapersons and the general public were not allowed to enter the site and no one knows what exactly is ongoing inside the compound.

Earlier in the day, India’s Ministry of External Affairs said that it was closely monitoring the situation.

We are deeply concerned at the reports emanating from Kabul about an attack on a sacred gurdwara in that city,” a statement citing Ministry spokesman Arindam Bagchi said.

“We are closely monitoring the situation and waiting for further details on the unfolding developments.”

In March 2020, two dozen worshippers were killed when a gurdwara was attacked in downtown Kabul.

In recent months, the war-torn country has been hit by a series of terror attacks reportedly staged by the Islamic State (IS) terror group opposing the Taliban-led government.

On Friday, one person was killed and seven others were wounded after a blast hit a mosque in the northern province of Kunduz.