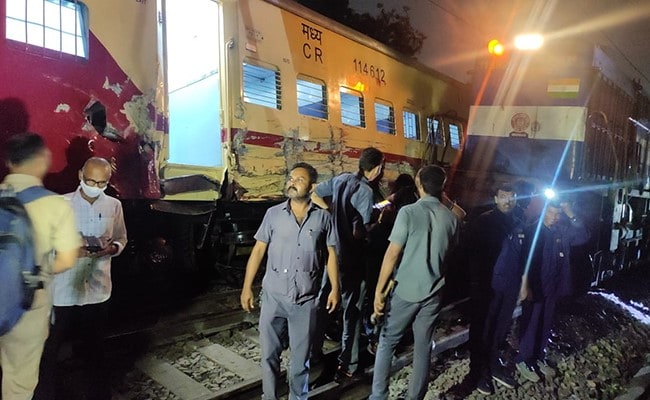 Three coaches of the Dadar-Puducherry Express derailed at Matunga station in Mumbai on Saturday night after its coaches brushed against another train on a parallel track, showed a video from the accident site.

“Arey peeche ho peeche, gaadi thuki (Get back, get back, the train just got hit),” a person is heard shouting in the video.

There were no reports of anyone getting injured in the incident which took place around 9.45 pm, just after the train departed for Puducherry from the Dadar terminus.

The Dadar-Puducherry Chalukya Express was entering on DOWN fast line from platform 7 of the Dadar Terminus, when the CSMT-Gadag Express, which departed around 9.30 pm, dashed it from the rear side on a crossing, the official said.

Quaiser Khalid, commissioner, Government Railway Police, said in a tweet that there was a “minor collision” between the two down trains and the Puducherry Express was being evacuated. This was the second derailment on the Central Railway section this month. Earlier, the Lokmanya Tilak-Jaynagar Express (Pawan Express) had derailed near Nashik in Maharashtra on April 3, 2022.

Relief trains have been moved to the site for restoration of services.

The incident took place a day before the 169th anniversary of the first run of a passenger train in India.

The first passenger train in India (and Asia) ran between Mumbai and Thane on April 16, 1853. The Indian Railway, thus enters into its 170th year of service from Saturday.