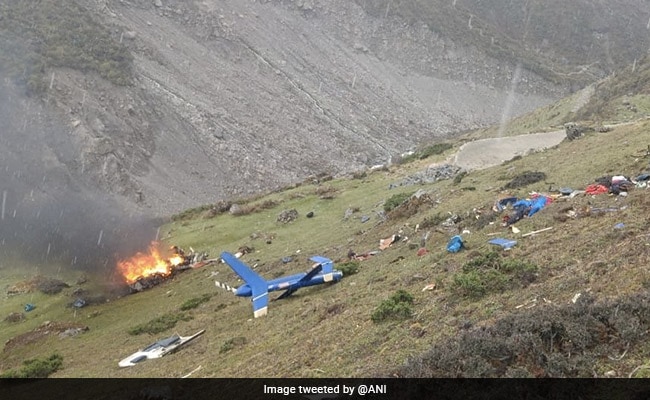 The helicopter crashed right after the takeoff.

All seven people, including a pilot, onboard a helicopter were killed after it crashed near Kedarnath in Uttarakhand today.

The helicopter, carrying pilgrims, crashed right after the takeoff from the Kedarnath shrine near Garud Chatti in Rudraprayag at around 11.40 am, officials said.

“The exact cause of the accident will be known after a proper investigation,” Mr Shankar said.

Aviation regulator sources said a loud noise was heard before the helicopter caught fire near Garud Chatti. “A Bell 407 helicopter VT-RPN belonging to a Delhi-based Aryan Aviation has crashed on the way from Kedarnath to Guptkashi, possibly due to cloudy weather,” sources told NDTV.

Chief minister Pushkar Singh Dhami has ordered a detailed inquiry into the crash.

Civil Aviation Minister Jyotiraditya Scindia expressed his anguish over the incident and said they are in constant touch with the state government.

The helicopter crash in Kedarnath is extremely unfortunate. We are in touch with the State government to ascertain the magnitude of the loss, and are constantly monitoring the situation.

President Draupadi Murmu and Prime Minister Narendra Modi have condoled the death of pilgrims and the pilot in the chopper crash.

Anguished by the helicopter crash in Uttarakhand. In this tragic hour, my thoughts are with the bereaved families: PM @narendramodi