A Wild Elephant Entered A Children’s Park. This Happened Next 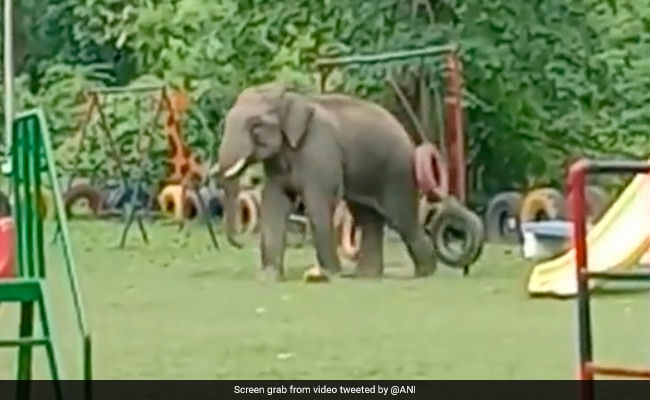 A wild elephant was seen playing at a Children’s park in Narengi Army Cantonment in Guwahati.

In a heart-warming video that is circulating on the Internet, with over 30,000 views, a wild elephant was seen playing at a children’s park.

The park is situated inside the Narengi Army Cantonment in Guwahati.

The 30-second video features the elephant gently playing with the children’s swings. It walks back and forth between the swings and even playfully kicks them with its back leg.

The Narengi Army Cantonment is situated alongside an elephant corridor. It is also common to see herds of wild elephants stray into highways.

Locals said that the elephant may have strayed into the cantonment from the nearby Amchang Wildlife Sanctuary in search of food.

Last month, another wild elephant surprised a group of people playing football at the military camp. The video, which was widely shared on social media, shows the elephant crossing a road to join the game. Someone passes the ball to the elephant and it manages to return-kick the ball with its rear legs. The elephant then proceeds to leave the field, with its trunk raised high, as if to say goodbye.