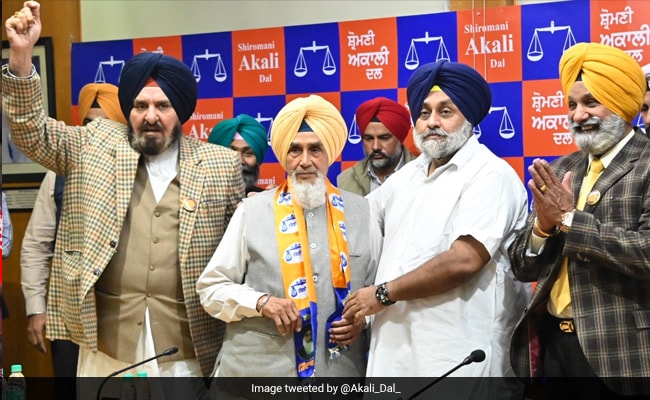 Former Punjab AAP convener Sucha Singh Chhotepur joined the Shiromani Akali Dal in the presence of party chief Sukhbir Singh Badal in Chandigarh on Thursday and will contest the upcoming polls from the Batala assembly seat.

Mr Chhotepur was the state convener of the Aam Aadmi Party in Punjab, but was removed from this post by party in August 2016 on the charges of corruption.

He was accused of accepting money from a ticket aspirant ahead of the 2017 assembly polls. However, Mr Chhotepur had denied these charges.

Akali Dal chief Badal called mr Chhotepur an “honest” politician and said the party will get a boost not only in the Majha region but also across Punjab with his joining.

He said Mr Chhotepur had played a key role in building AAP in Punjab but later it “deceived” him.

“Chhotepur will be the candidate of the SAD-BSP alliance from Batala seat,” he said.

Replying to a question, Mr Chhotepur slammed the Aam Aadmi Party and said there is a big difference in what the AAP leadership says and what it does.

He claimed that the AAP ignored workers who had worked hard in building the party.

After Mr Chhotepur was sacked from the AAP, he had formed his own outfit called Apna Punjab Party.

Mr Chhotepur was a minister in the Surjit Singh Barnala-led government in Punjab in 1985.

He had contested as an independent in 2002 from Dhariwal constituency in Gurdaspur district and defeated SAD candidate Sucha Singh Langah.

In 2012, he had contested from the Qadian assembly seat in Gurdaspur as an independent and had lost to Congress candidate Charanjit Kaur Bajwa.

In 2014, Mr Chhotepur had unsuccessfully contested on an AAP ticket from the Gurdaspur parliamentary seat.