A local court today allowed a narco-analysis test, for lie-detection, on Aftab Poonawala, the 28-year-old accused of killing his live-in partner Shraddha Walkar and chopping up her body. His police custody was also extended by five days while lawyers held protest at the court, calling for him to be hanged, though he was presented via video link as police feared he would be attacked.

Police have been interrogating him since the arrest last Friday and had got five days of custody on Saturday that ended today. Custody extension was sought as police argued that crucial evidence — such as Shraddha Walkar’s mobile phone and the knife he used to chop up her body — remains to be gathered.

So far, police have a “confession” in custody which, legal experts says, is not valid evidence unless made before a judge and corroborated with other material proofs.

Ahead of the 4 pm hearing, expecting that he’d be brought in, a large group of lawyers was seen outside the courtroom, shouting “hang him, hang him”. Some shouted, “Hang the jihadi.” The case has reignited debates on “love jihad”, a term the right wing uses to accuse Muslim men of “luring” Hindu women to convert them to Islam. 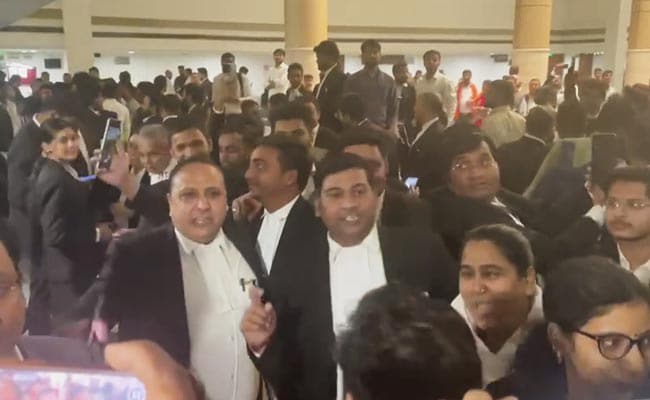 Lawyers at the court in Delhi’s Saket demanding Aftab Poonawala be hanged.

Aftab Poonawala and Shraddha Walkar, who’d met on dating app Bumble, had moved to Delhi only in mid-May this year after living together in their hometown Vasai near Mumbai for at least a year before that. After an argument barely four days after moving into a rented flat in Mehrauli, on May 18, Aftab Poonwala strangled Shraddha Walkar, whose body he cut up, kept the pieces in a fridge and dumped them in a jungle over the next 18 days, police have said.

The crime was uncovered after Shraddha Walkar’s father, Vikas Walkar, who had not been in touch with her for over a year as he opposed the inter-faith relationship, went to the cops around a month ago as her friends told him she’d been out of touch with them too.

Police say his confession led them to the details, and evidence to corroborate the crime trail is being collected.

Her father told NDTV yesterday that Aftab Poonawala’s confessed in his presence. “The police asked him, ‘Do you know him’? He said, ‘Yes, he is Shraddha’s father’. Then at once, he started saying Shraddha is no more. I collapsed there. I could not hear any more. Then he was taken away. I was in no condition to hear it,” Vikas Walkar said.

Police have sought permission for a narco-analysis test on Aftab, which involves injecting a specific chemical into the suspect’s body to lower their self-consciousness so they speak the truth.

DNA tests are being conducted to establish whether the body parts found in the forest are Shraddha’s; reports will take two weeks, police said.

But the knife or saw used to cut up the body has not yet been found. Most parts of her body are missing. Clothes worn by Aftab and Shraddha on the day of the murder have not been found either. Shraddha’s mobile phone remains untraced.

On the evidence list so far are bills to show he bought a knife and fridge on May 19, a day after the murder; bones found in the jungle; blood found in the kitchen; bank details of Rs 54,000 Aftab got from Shraddha’s account; call records and location data from phones; Shraddha’s bag from the flat; and her father and friends’ statements.

Previous articleBigg Boss 16: MC Stan gets into a physical fight with Shalin Bhanot after an argument over Tina Dutta | Television News
Next articleAirtel rolls out 5G service at Pune Airport
LocalTak®Sabse Tez