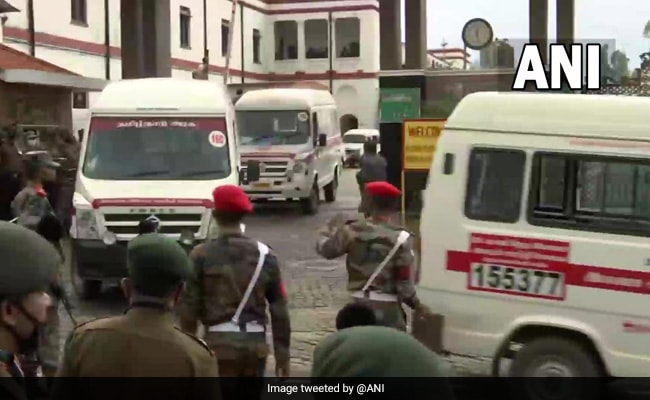 The convoy was taking the bodies from Wellington near Coonoor to the Sulur Air Force Base.

One of the ambulances carrying the remains of Chief of Defense Staff Bipin Rawat, his wife and 11 others who died in a helicopter crash yesterday met with a minor accident this afternoon while driving to Sulur in Coimbatore.

The convoy was taking the bodies from Wellington near Coonoor to the Sulur Air Force Base. The bodies were to be flown to Delhi from there.

One ambulance had a minor accident near Coimbatore. The bodies were shifted to another ambulance.

On their way to Sulur, the vehicles drove through roads that were lined with people paying tribute to the Chief of Defence Staff and other officers who died in the crash.

General Rawat, India’s first Chief of Defence Staff, was heading to the Defence Services Staff College in Wellington to address faculty and students. Just 10 minutes before it was to land, the chopper crashed, killing 13 on board. Group Captain Varun Singh, the only survivor, is being treated for severe burns and is on life support.

This morning, the bodies were taken from a military hospital to the Madras Regimental Centre in Wellington, where people paid tribute to General Rawat and other personnel. Tamil Nadu Chief Minister MK Stalin was also present at the ceremony.

Uniformed soldiers laid out coffins draped in the flag in the presence of officers from all three services of the armed forces. Military personnel, veterans, politicians and others offered floral wreaths and flowers by the coffins.