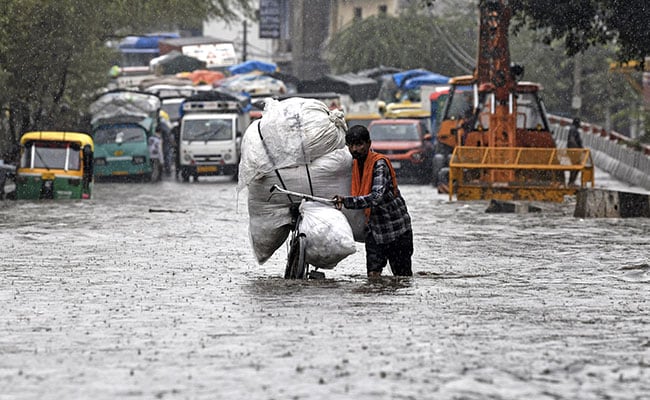 Delhi Rain: There are 7 flooded stretches in Delhi that commuters have been asked to avoid today. (File)

Incessant rains have left several parts of the National Capital Region waterlogged thus causing heavy traffic congestions. In light of this, the Delhi Traffic Police has released a list of waterlogged areas in the capital on Friday. The India Meteorological Department (IMD) has issued a ‘yellow alert’, cautioning people about moderate rain at most places in the city.

The flooded stretches in Delhi that commuters have been asked to avoid by the traffic police include the Libaspur underpass, Maharani Bagh Taimur Nagar cut, CDR Chowk, Mehrauli towards Gurugram, Andheria Mode towards Vasant Kunj as well as the stretch near Hanuman Setu on Shanti van to Hanuman Mandir Carriageway.

Additionally, traffic police said that the area under the Nizamuddin bridge, Singhu Border near the petrol pump and MB Road towards Sainik Farm carriageway should also be avoided.

Delhi received 31.2 mm of rainfall between 8.30 am and 5.30 pm as the light to moderate rain drenched Delhi for the second consecutive day on Thursday, leading to flooded roads in several areas and affecting traffic movement on key roads across the city.

The fresh spells of rain, just before the withdrawal of monsoon from the National Capital Region, will help cover the large deficit (46 per cent till September 22 morning) to some extent.