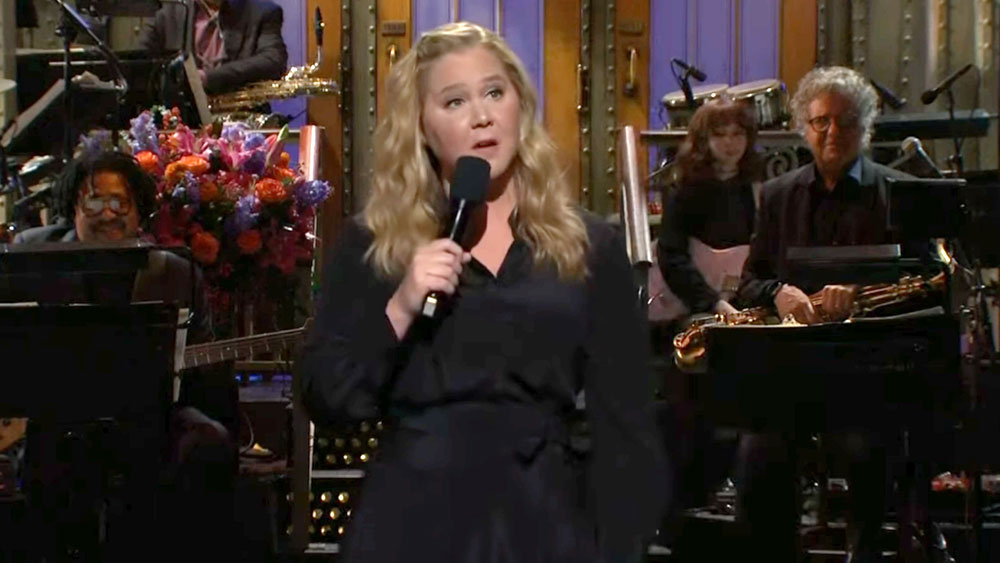 Amy Schumer took the stage of Saturday Night Live as the host of the late-night sketch show. The comedian started off her monologue by reminding everyone about the upcoming midterm elections. Watch Schumer’s monologue in the video posted above.

“I can’t believe I have the honor of being the final host before the midterm abortions — elections, what did I say? Sorry, I was thinking about what’s at stake if we don’t vote,” she said.

Schumer then moved on to talk about her time being pregnant and people giving her advice, “like the whole time I was pregnant I had this one friend, she kept telling me, ‘You gotta do prenatal yoga, it really helps with the birth.’ So, I immediately signed up for a C-section.”

The comedian joked about doctors advising pregnant people about not having sex for six weeks.

“Remember when you just wolverined by fupa open? Remember that? How about six years? That’s when I think I’ll be ready,” Schumer joked. “Remember? His foot got caught in my intestines. When can I get raw-dogged from behind? Please!”

Schumer said that she and her husband “have a good sex life” and “the best weekday to have sex is always tue-morrow.” She then got a little intimate revealing that her husband always puts the lights on before they have sex. However, Schumer says that she shuts them off shortly after.

The Inside Amy Schumer star then explained her husband asked her why she was so shy if she had a “beautiful body.”

“And I was like, oh my God you’re so cute. You think I don’t want you to see me,” she quipped to a big applause from the audience.

Later on, she talked about her husband being on the autism spectrum, which used to be called Asperger “but then they found out that Dr. Asperger had like Nazi ties Kanye.” Schumer made mention of Kanye West’s antisemitism which has garnered major backlash for the rapper.

Watch Amy Schumer’s monologue in the video below.