Arjun Kapoor Is “Working Out Even On A Holiday,” Courtesy Malaika Arora 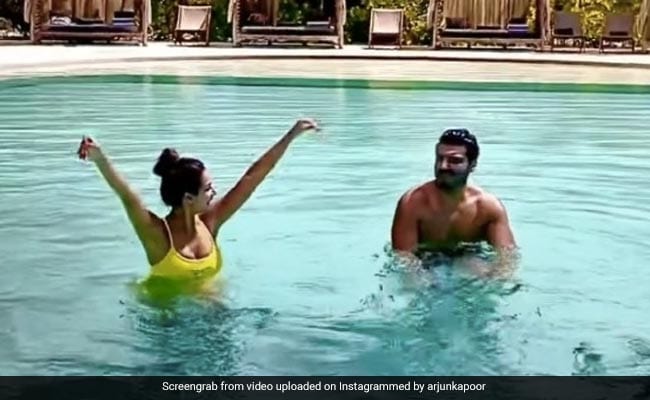 Malaika Arora and Arjun Kapoor’s Maldives diaries keep getting better and better with every new day. The star couple checked into the island nation earlier this week and they have actively been sharing pictures from there. After their cycling session on Saturday, Malaika Arora and Arjun Kapoor decided to dig into their favourite meals and they documented those moments on their Instagram stories. On Sunday, Malaika posted a picture of Arjun tucking into a meal and and she captioned it: “DND! Man at work.” Arjun, on the other hand, posted a stunning shot of Malaika and he wrote on his caption: “Fries before guys?” Responding to his post, on her Instagram story, Malaika wrote: “Hell ya.”

After their perfect meals, they decided to work out in the pool. Arjun Kapoor posted a video from the session and he wrote: “When the girlfriend is a tougher task master than your trainer… See Drew Neal (Arjun’s fitness trainer). I’m working out even on holiday in the Patina Maldives pool thanks to Malaika Arora.” Reacting to Arjun’s post, Malaika Arora dropped muscle emojis in the comments.

Check out the video here:

Take a look at the pictures shared by Malaika Arora here: 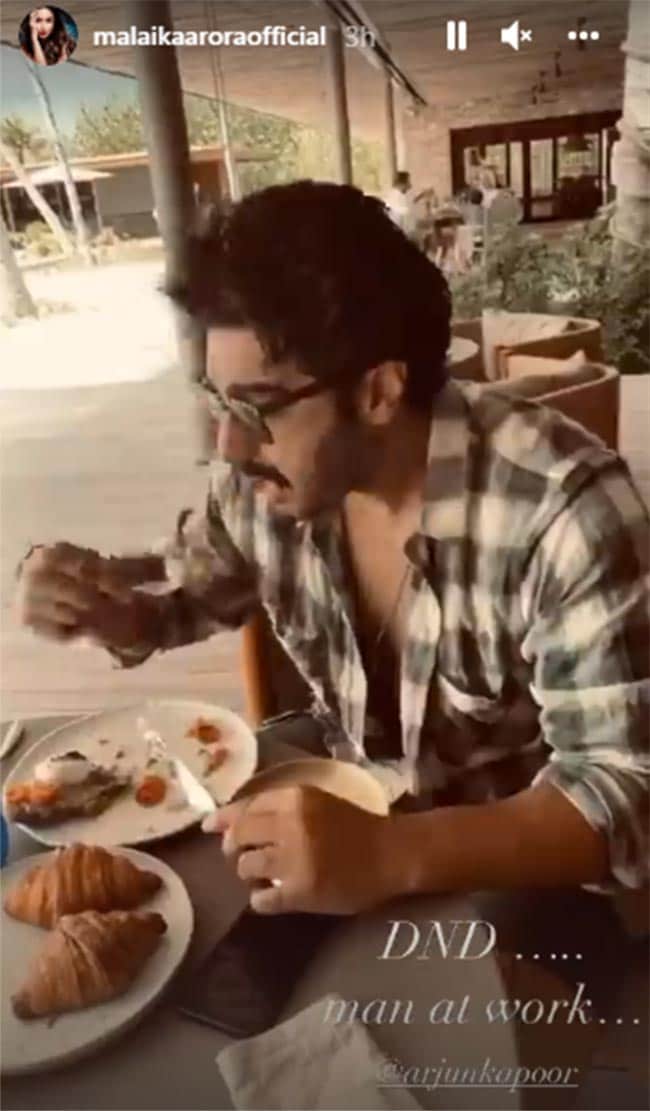 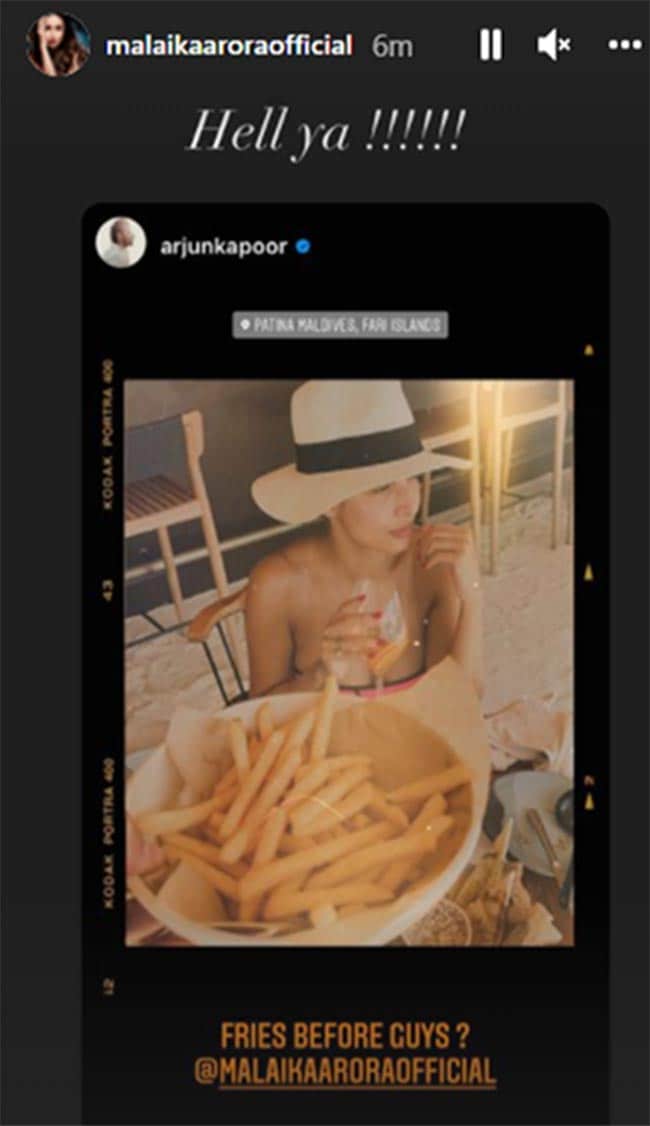 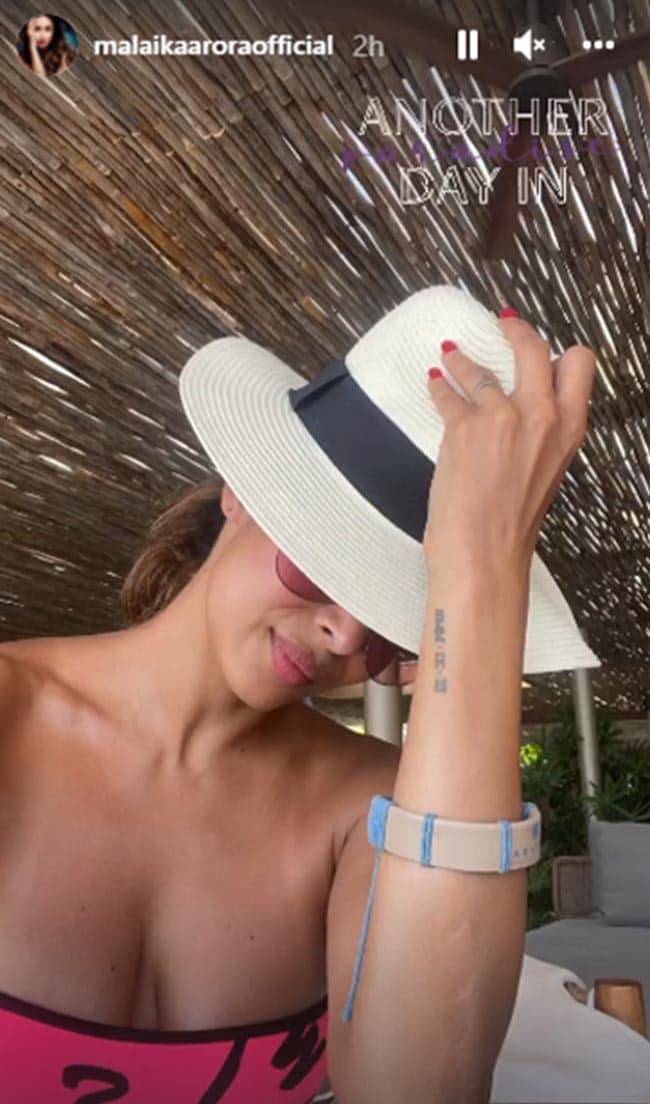 Malaika and Arjun reportedly started dating in 2018. Malaika Arora was previously married to actor-filmmaker Arbaaz Khan. They were married for over 19 years and got divorced in 2017. They are parents to 18-year-old Arhaan. He went abroad for higher studies a few months ago.

In terms of work, Malaika Arora is seen as one of the judges in the dance reality show India’s Best Dancer, alongside choreographers Terence Lewis and Geeta Kapur. Malaika Arora is best-known for her dance performances to popular tracks such as Chaiya Chaiya, Munni Badnaam Hui, Anarkali Disco Chali and Hello Hello among many others. She also featured as a judge in Supermodel Of The Year 2 with Milind Soman and Anusha Dandekar.

On the work front, Arjun Kapoor was seen in the horror comedy Bhoot Police with Saif Ali Khan, Jacqueline Fernandez and Yami Gautam. Earlier this year, the actor starred in Sandeep Aur Pinky Faraar, in which he shared screen space with Parineeti Chopra. He also featured in Sardar Ka Grandson. Last year, he featured in the period drama Panipat along with Kriti Sanon and Sanjay Dutt. He will next be seen in Ek Villain with Disha Patani, Tara Sutaria and John Abraham.