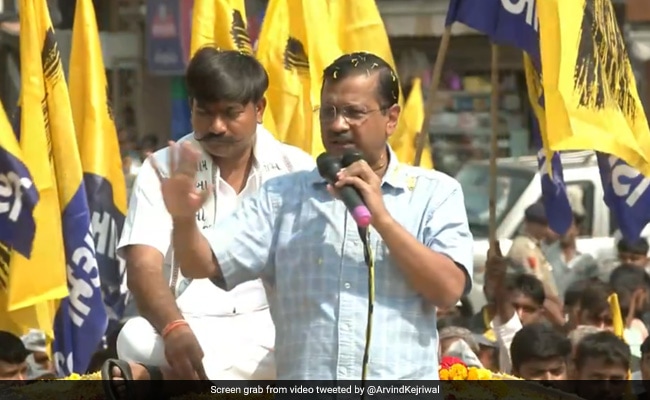 Arvind Kejriwal was addressing people at Wankaner in Morbi during roadshow.

Aam Aadmi Party (AAP) leader Arvind Kejriwal on Sunday alleged efforts are being made to save the people responsible for the repair work of the Morbi suspension bridge which collapsed on October 30 killing more than 130 people.

He also said if AAP forms a government in Gujarat, it will construct a grand Morbi bridge.

Addressing people at Wankaner town in the Morbi district in Gujarat at a roadshow (tiranga yatra), Mr Kejriwal said incidents like the Morbi bridge collapse will occur if the “double engine” of BJP is voted to power.

“Whatever happened in Morbi is very sad. There were 55 children among those 150 people who died. They could have been your children. Whatever happened is sad. But what is sadder is that efforts are being made to save the people responsible for the tragedy,” the Delhi chief minister said.

As many as 135 people died after the British-era “jhulta pul” or the hanging cable bridge on the Machchhu river in Morbi collapsed on Sunday evening.

“Why are you trying to save them? What is their relationship with them? They enjoy some relationship with them, isn’t it? The Oreva Group and its owner responsible for renovating the ill-fated bridge have not been named in the FIR,” the AAP’s national convener said. He appealed to the people to vote for AAP en masse in the polls.

Gujarat will vote in two phases on December 1 and December 5. The counting of votes will be taken up on December 8.

Morbi-based clock and e-bike maker Oreva Group was given the contract by the Morbi Municipality to repair and operate the ill-fated hanging bridge for 15 years and charge tickets in the range of Rs 10 to Rs 15 for its use, as per the municipality documents assessed on October 31.

The firm had claimed on October 26 that it had roped in experts for the repair work, adding that the material used was built as per specifications by “specialised firms”.

Mr Kejriwal said a storm of change is coming in Gujarat.

Mr Kejriwal said it is not his habit to tell lies.

“All promises AAP made to the people of Gujarat regarding education, healthcare, employment etc are based on what my government did in Delhi.

“I am an educated person. I know how to work, and construct schools, and hospitals. ..I do not make false promises. I will never promise to give you Rs 15 lakh. I do not lie. I am only talking about the work I have done in Delhi. I am an honest person, I do not indulge in corruption,” he said.

Mr Kejriwal said he has put in place a plan for Gujarat which includes the construction of a large number of hospitals, mohalla clinics and providing jobs to youths.

“You have given 27 years to BJP. I am here to seek only five years. Give us five years, I will not come to ask for your votes if we do not deliver,” he said.

After Wankaner, Mr Kejriwal also participated in the “tiranga yatra” at Chotila where he told people that he was like their brothers and will rid them of inflation.

He said the free electricity guarantee will be implemented from March 1 after AAP forms a government in Gujarat.