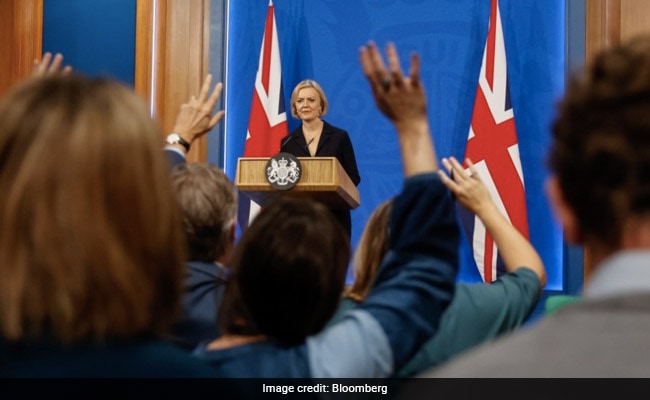 Britain’s beleaguered prime minister Liz Truss is battling to rescue her premiership this week, when financial markets will deliver a fresh verdict on her screeching economic reset while mutinous backbenchers plot to oust her.

Only 40 days in office, Truss spent Sunday huddling with new Chancellor of the Exchequer Jeremy Hunt, her pick to restore stability after a humiliating climbdown that included sacking her initial choice for the job and junking an economic plan that triggered a sell-off in UK assets.

While markets will be testing Truss, her fate ultimately rests with a Conservative Party that has her scrambling to save her job.

Truss will host a reception for the Cabinet at 10 Downing Street on Monday evening to continue to get their input into a medium-term fiscal plan, which Hunt will announce on Oct. 31, according to an official familiar with the matter. Hunt will also host meetings with all Conservative MPs this week to get their feedback, the official said.

Hunt spent the weekend outlining a radically different fiscal approach — taxes would have to rise, spending would have to be cut — in a bid to prevent further punishing increases in UK government borrowing costs. Gilts sold off dramatically on Friday afternoon after an underwhelming press conference by Truss, and the Bank of England’s emergency bond-buying program, introduced to calm markets after Truss unveiled her mini-budget, has now expired.

The pound rose in early Asian trading on Monday as investors speculated that more of Truss’s package of unfunded tax cuts might be reversed. FTSE 100 futures slid as much 0.6% at open, although faring better than the Euro Stoxx 50 contracts.

If Truss can weather the markets, her second test will be to grapple with a party in open revolt. As of Sunday evening, three Tory MPs were publicly calling for her to quit and multiple others said privately they’ll write to Graham Brady, the chairman of the backbench 1922 Committee, urging him to change party rules so a vote of confidence can be held in Truss.

Plotting against Truss is accelerating because the Tories are spooked by a record poll deficit against Labour and the belief they face electoral meltdown if she is allowed to stay in post. Supporters of Rishi Sunak , who came second to Truss in the recent Tory leadership contest, stepped up efforts over the weekend to secure support to install him.

Julian Smith, a former chief whip, has been in touch with multiple Conservative MPs to gauge support for a so-called Sunak coronation, bypassing another vote from the party’s grassroots supporters. Mel Stride, a vocal critic of Truss and a Sunak supporter, is hosting a dinner for MPs on Monday evening, following a similar event last week.

An ally of Truss warned that the plotters do not have any regard for the UK’s economic prosperity or the fate of the markets. The plotters will not get a coronation and will simply bring about a general election, the person said.

Truss’s position is protected by a one-year immunity clause under current Conservative rules. About two thirds of the party’s nearly 360 MPs need to tell the 1922’s executive to change the rules before it would do so, according to a person familiar with its deliberations, meaning an imminent ouster of Truss isn’t likely. The executive won’t meet until Wednesday, the person said.

Still, Truss could plausibly limp on for weeks or months with the markets calmed, her policy platform reversed and Hunt effectively in charge, according to a senior Conservative operator who spoke on condition of anonymity. This is the most likely outcome, the person said, because there’s no unity candidate and enough MPs want to give the new Hunt operation a chance.

Fighting to keep her premiership alive, Truss spent Sunday locked in talks with her chancellor at her official country residence about the contents of the government’s medium-term fiscal plan.

Earlier, Hunt said nothing is “off the table” when asked whether he will abandon more of Truss’s tax-cutting agenda, confirming that his is now the leading government voice on UK fiscal policy.

In a BBC interview on Sunday, Hunt declined to rule out delaying by a year the prime minister’s plan to cut the basic rate of income tax, a move that would amount to another U-turn. A delay could save GBP 5 billion ($6 billion), according to a report in the Sunday Times.

But it’s still a live question about whether Truss even survives until Halloween for the fiscal plan, her fate resting in the hands of financial markets and her backbenchers.

Truss has “undermined Britain’s credibility as a trustworthy, responsible leading economy, and fractured our party in a potentially irreparable manner,” Tory MP Jamie Wallis said in his letter calling for her resignation. “You no longer hold the confidence of the country or the parliamentary party.”