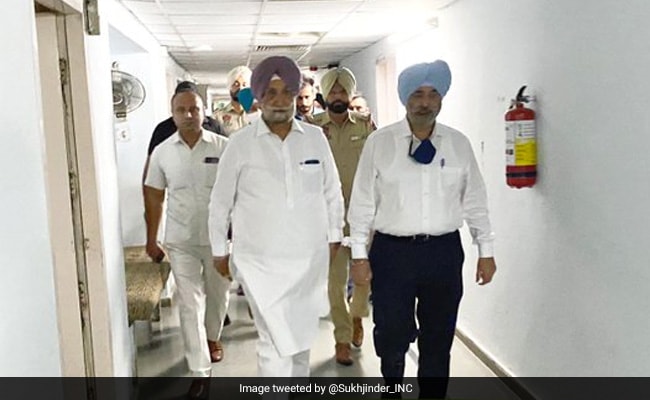 Sukhjinder Singh Randhawa made a surpise visit to the Punjab Police headquarters.

Punjab Home Minister Sukhjinder Singh Randhawa conducted a “surprise check” at the state police headquarters in Chandigarh this morning. The minister tweeted photos of him inside the headquarters. In what could be seen as a message to Navjot Singh Sidhu amid the Congress turmoil in the state, the state’s police chief, Iqbal Preet Singh Sahota, accompanied him.

The appointment of the IPS officer as the Punjab police chief was among the several sticking points that are believed to have led to Mr Sidhu’s resignation as the chief of Punjab Congress. Mr Sidhu, however, is now back on board after an agreement was reached with Chief Minister Charanjit Channi on Thursday.

“A surprise check was carried out at the @PunjabPoliceInd. Headquarters in Sector 9 today, and the officers were directed to reach the office on time so as to provide better services to the people and prevent hustle and bustle,” Mr Randhawa tweeted.

A surprise check was carried out at the @PunjabPoliceInd Headquarters in Sector 9 today,and the officers were directed to reach the office on time so as to provide better services to the people and prevent hustle and bustle@RahulGandhi@CHARANJITCHANNI@harishrawatcmukpic.twitter.com/7FbmaEaI9L

Mr Sidhu was not on board with the Chief Minister’s move to appoint Mr Sahota as Punjab police chief. He was said to be keen on another officer for the post but Mr Channi had his way. Mr Sahota was the head of a Special Investigation Team formed in 2015 by the then Akali government to probe the 2015 sacrilege case – a highly emotive issue.

Sources indicated that Mr Channi is now ready to drop Mr Sahota as the police chief.

Mr Sidhu was also upset about the key Home Ministry being assigned to Mr Randhawa, his rival. He had earlier strongly opposed any talk of elevating Mr Randhawa as Chief Minister following Amarinder Singh’s resignation.

Among those who were tagged in the Mr Randhawa’s post from the police headquarters were Congress leader Rahul Gandhi, Mr Channi, the Congress’s Punjab in-charge, Harish Rawat, and the accounts of the Congress and its Punjab unit.