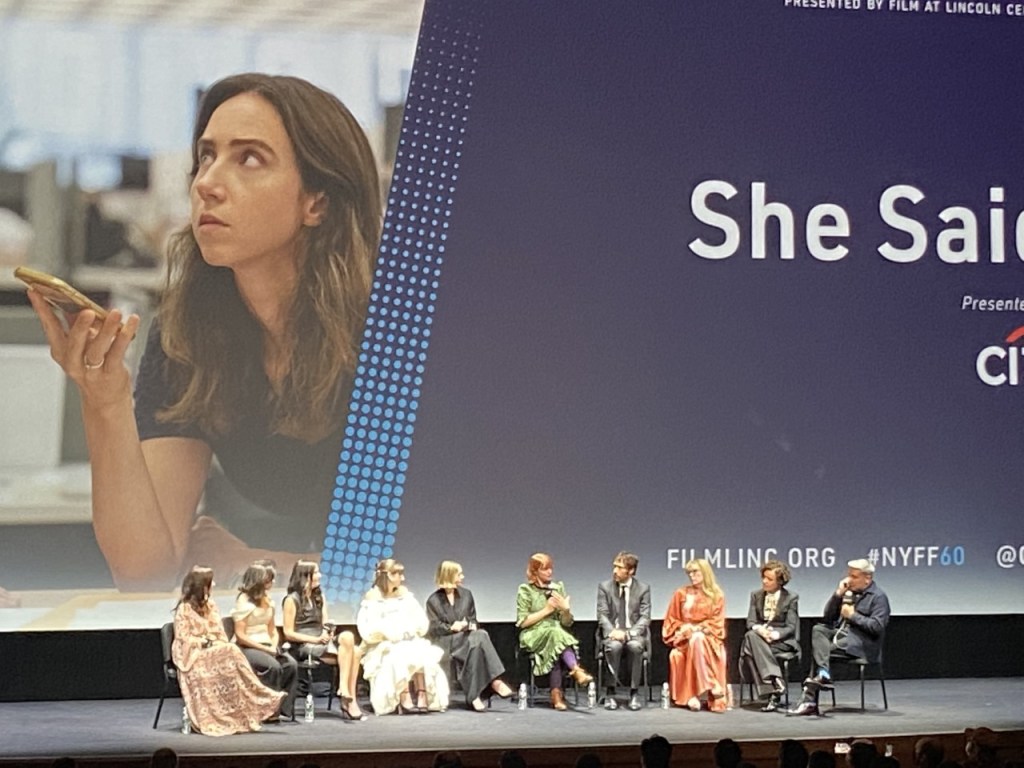 Intimacy coordinators, new protocols and safeguards and “things that seem very small on the page” have made Hollywood a better place for women in the MeToo era unleashed by the New York Times’ Oct. 5, 2017 investigation of Harvey Weinstein, said Zoe Kazan, who plays journalist Jodi Kantor in Maria Schrader’s She Said.

“We are still living in an oppressive patriarchy. That’s not special to our industry. There is so much change left to be effected,” Kazan said at the world premiere of the Universal Studios’ release at the New York Film Festival. But, “One of the things that has happened as a result of this reporting … and the reporting that came out subsequently, is that there is now a conversation that is open and not just behind closed doors, and I think that makes an enormous difference.”

“There are also things that seem very small on the page, like having an intimacy coordinator, which has now become an industry standard,” she said. Briefly “weirded out” by the idea, pretty “immediately, I was like, ‘I would never throw a punch without a stunt coordinator. It makes so much sense. Why has this not been here all along?’ So I feel there are certain safeguards and channels of communication that are open,” she told a Q&A after the screening.

Ashley Judd, the first actress who agreed to go on the record for Kantor and Twohey, played herself in the film. “So much has improved,” she said. “I remember being sexually harassed on set and not knowing where to go and with whom to speak about it. And now our union is so switched on and strong. On the membership card, there is a sexual harassment hotline number. There is a definition of sexual harassment on the web page, there are all the protocols: I can take someone to an audition with me. Auditions don’t happen in hotel rooms anymore. They don’t happen before eight o’clock in the morning, or after six o’clock at night.”

More broadly, Judd said, MeToo has allowed women to “reframe” their experiences, call out abuse, not blame themselves. That’s something the young film industry aspirants in the story, the book and the film told Times’ journalists years later that they had been been painfully, wrenchingly unable to do. MeToo has “allowed women’s consciousness to transform and to set boundaries and claim autonomy,” Judd said after a crescendo of applause when she came onstage.

Applause also surged at post-credits text scroll noting that Weinstein had been convicted in New York and is standing trial in Los Angeles. In a quirk of timing, jury selection started this week in the jailed ex-mogul’s long delayed West Coast sex crimes trial. A Superior Court judge had rejected a request by Weinstein’s defense to delay the trial because the film could sway a jury.

“It’s heavy being in this room. It’s a room where Harvey Weinstein has been, this room and this festival,” said NYFF director Eugene Levy.

The film, based on the eponymous book by Kantor and Megan Twohey, hews closely to the painstaking journalism required to produce a complex, well-documented piece. “It’s only five years ago. We were all very aware of the story, what we were not aware of was how that story came along and who those people were, and how did they start investigating,” said Schrader.

The reporters were also on hand.

“This film encapsulates so much of what we believe about journalism,” said Kantor. “It is our job to build people’s confidence in telling the truth and we really hope the film will help in that work. The group of sources and people who shared information was relatively small and yet their impact was so large, and we hope this film makes people remember that these personal stories can make an enormous difference.”

The duo had fretted that the story might never be published, or worse, that no one would care if it was.

“So, for us, getting to the finish line and publishing the story… we could feel the impact almost immediately. Our phones and emails were flooded with other women coming forward with stories from all different professions and all different walks of life,” said Twohey.

“You can see the ripple effects of that playing out even today. It’s so wonderful to see, even five years later, this movie plunge you back… to the origin story. And I think it’s useful for everyone as the MeToo story continues to take twists and turns.”

Previous articleGujarat, Himachal Pradesh Election Dates To Be Announced Today
Next articleHere’s Why You Should Focus On Weight Management Instead Of Weight Loss This Festive Season & How To Do It
LocalTak™Sabse Tez