The flood situation in Assam deteriorated further on Sunday with the deluge claiming nine more lives, including three children, taking the death toll to 71. While six people died due to floods, three others were killed in landslides. All the three landslide-related deaths were reported from Cachar district.

At least eight people have also gone missing. The number of flood-hit people in the state went up to over 42 lakh on Sunday evening. Three deaths were reported from Cachar district, Barpeta reported two deaths, followed by one death each from Bajali, Kamrup, Karimganj and Udalguri districts.

While four people have gone missing from Dibrugarh, one each is missing from Cachar, Hojai, Tamulpur and Udalguri districts, respectively. With this, the total number of persons losing their lives in this year’s flood and landslides has gone up to 71.

Devastating floods triggered by incessant rain continued to ravage Assam and around 5,137 villages are under the flood waters. Barpeta is the worst-hit district with over 12.76 lakh people suffering, followed by Darrang with nearly 3.94 lakh people affected and Nagaon with more than 3.64 lakh people hit by the deluge. The flood victims say that they have now left everything to God as the situation is only turning worse. 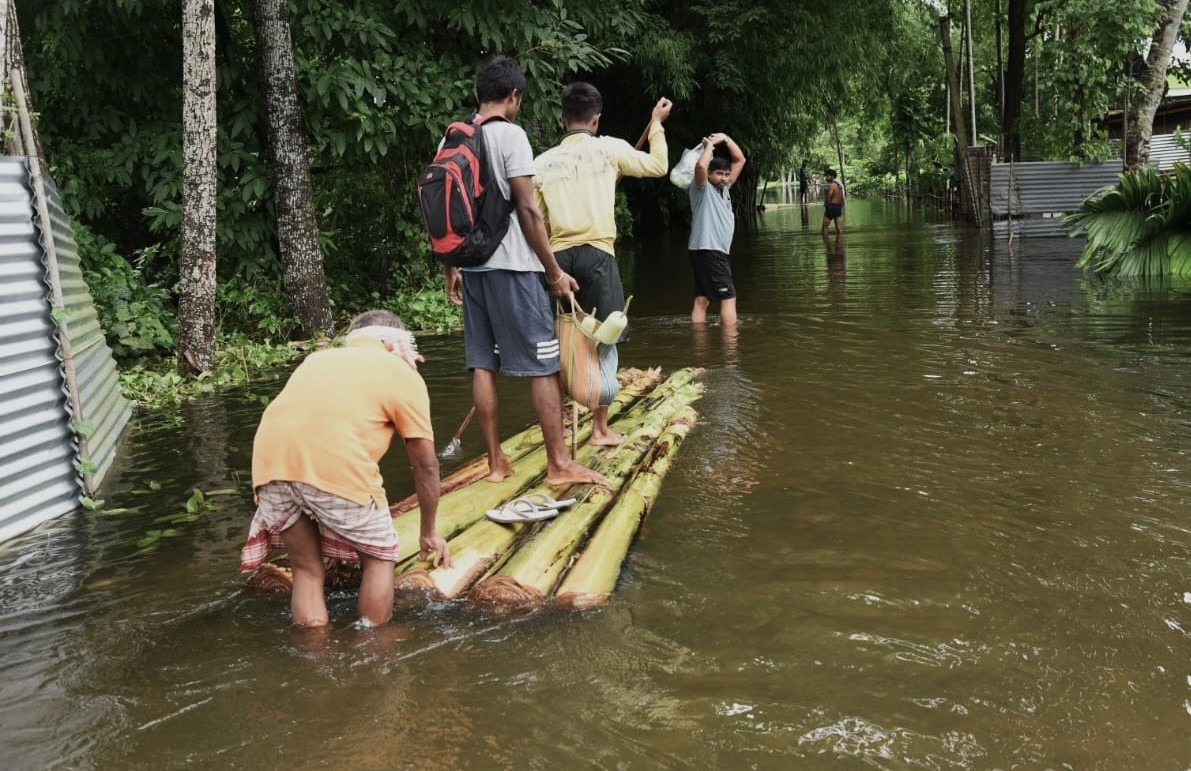 The anti-poaching camps of Kaziranga National Park inundated in flood waters due to incessant rainfall. “Our houses are under flood water for the past three days and we have been staying on the highway. We are already in deep trouble and if the rain does not stop, our condition will turn even worse. We have not received any relief materials from the government,” claimed Rekib Ahmed, a flood victim in Kamrup’s Rangia.

The flood waters have submerged 107370.43 hectares of crop land and over 29.28 lakh domestic animals and poultry have been affected in the deluge across 25 districts of the state. The villagers, who have lost everything to the deluge, claimed that they have not received any relief material from the district administration. They are surviving on the little ration that is left and by fishing in the flood waters.

“The situation in the villages is very grim and we have been living on the highway for the past 5-6 days. We have got only rice in the name of relief,” claimed another flood victim, Uttam Nath of the same district.

Abdul Hakim, a flood victim in Kamrup’s Balabari village, said, “It has been four days and the water level is still rising. Our whole village is submerged but we have not received any relief material. If it rains further, the situation will turn even worse. Everything got destroyed in the floods. We are somehow surviving with the little food stock left and selling fish which we are catching in the flood waters.” “Some people are taking shelter in the schools. Even the National Highway got inundated. The floods have wreaked havoc. We are now worried what will happen if it rains again,” said Abdul Malik, a flood victim of Kamrup’s Borbola village.