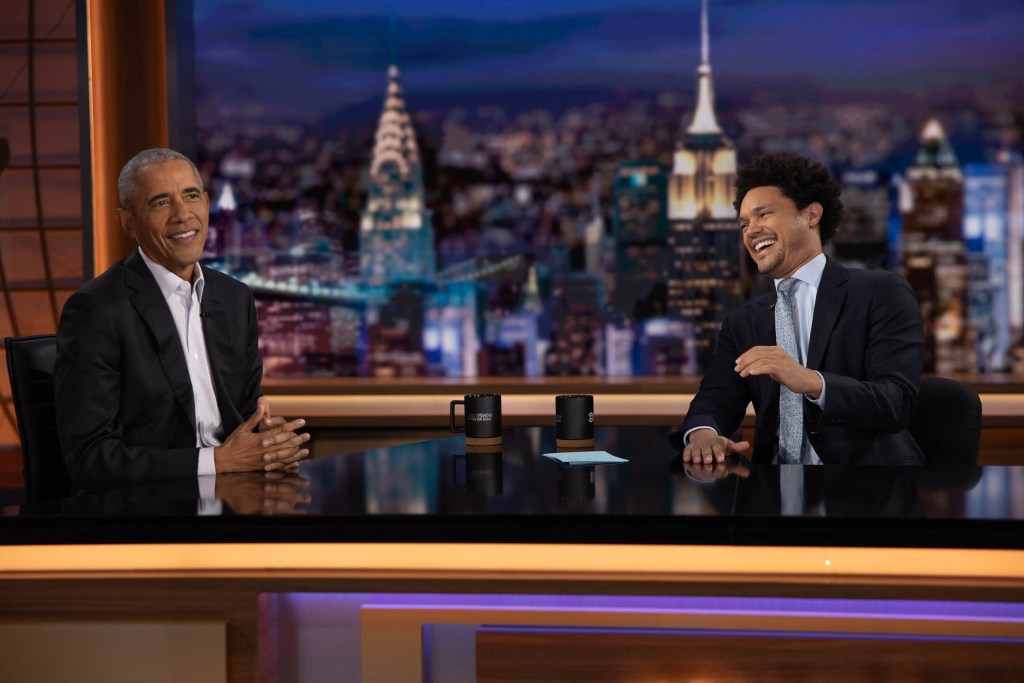 President Barack Obama was a guest on The Daily Show with Trevor Noah tonight, following a busy post-midterms week in politics that saw the Democrats retain control of the Senate, the Republicans seize a majority in the House, Donald Trump announce a third White House run and Speaker Nancy Pelosi announcing that she won’t seek a leadership role in the next Congress.

The ex-POTUS touched on those topics, and one of the quotes was a broad stroke but a teachable one: “Democracy requires, by definition, getting along with people who don’t agree with you,” he said.

You can watch the full 33-minute interview above.

Obama also gave a shout-out to the young voters who made 2022 a midterm anomaly, after a much lower turnout in 2014. “[Donald] Trump comes in, and suddenly 2018, 2020 and now this one, you see young people come in, and they’re typically voting at a rate of 70-to-30, 60-to-40 Democrat to Republican — and that makes a huge difference. So their enthusiasm is what really drove this election.”

Watch the full interview below.

RELATED: As Trevor Noah Heads For The Stage Door, ‘The Daily Show’ Team Shocked At Timing Of Exit

Noah’s opening salvo was a good lob that bounced back on him. “Do you miss your name, by the way?” he asked. “Because everyone calls you ‘Mr. President,’ but I feel like if people called me ‘Mr. Daily,’ I would miss just being called Trevor.”

POTUS 44 replied, with a smile: “You know, my best friends call me Barack — you should call me ‘Mr. President.’”

The interview ended with Obama telling Noah, who is leaving The Daily Show next month: “You’re already following one piece of advice that I’ve had — you’re leaving while your poll numbers are high.” The host then suggested that Obama join his upcoming stand-up tour. “I mean, I’ve said this to you before: Whether it’s the White House Correspondents’ Dinner, in Georgia when you were doing the speech: You’re a very funny guy.”

POTUS interrupted: “So you want me to open for you?”

“Not even open,” Noah replied. “I wouldn’t even dare.” Suggesting that they could “co-headline,” he added: “We’ll call it Half & Half.”

It marked Obama third visit to the Noah-hosted show, following a virtual appearance in 2020 and a 2016 appearance taped at the White House that was among the final TV interviews of his presidency.