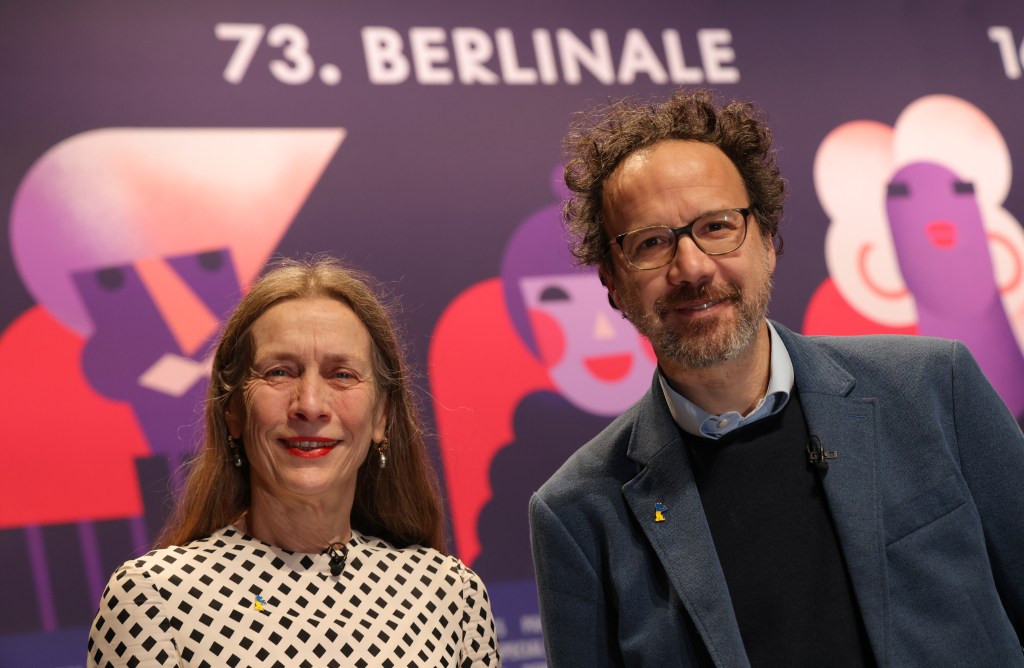 “It’s quite an eclectic selection,” Chatrian told the press conference in Berlin on Monday morning. “You will see we tried to include as many genres and cinematic forms as possible.

The International Competition features 18 titles, 15 of them world premieres, involving 19 different territories. Encounters, the Berlinale’s equivalent of Un Certain Regard which was launched in 2020, will showcase 16 films.

Chatrian has stuck with his love of mixing established names, including Philippe Garrel (The Plough), Margarethe von Trotta (Ingeborg Bachmann – Journey Into The Desert) and Christian Petzold (Afire), with newcomers, such as Celine Song and Giacomo Abbruzzese with respective first features Past Lives and Disco Boy.

European productions dominate but Asia is represented by The Shadowless Tower by China’s Lu Zhang, a Berlinale regular last at the festival in 2019 with Fukuoka, and Japanese animation maestro Makoto Shinkai’s Suzume, which marks the first anime in Competition in two decades.

Australia also has a strong presence with indigenous filmmaker Ivan Sen’s detective tale Limbo, starring Simon Baker (who was at the Berlinale with Higher Ground in 2020), and Rolf de Heer’s The Survival Of Kindness.

Earlier announcements by the Berlinale such as Kristen Stewart as jury president, Steven Spielberg’s Honorary Golden Bear and Rebecca Miller’s She Came To Me as the opening film had fuelled expectations that the festival might give Cannes or Venice a run for their money by pulling in a handful of big U.S. titles.

In the end, it has stuck to its indie and arthouse guns, selecting buzzy indie North American titles such as Song’s Past Lives and South African director John Trengove’s US-set Manodrome, starring Jesse Eisenberg, Adrien Brody and Odessa Young.

Deadline talked to Chatrian and Rissenbeck after the press conference to dissect the line-up.

DEADLINE:  On the basis of the previous announcements, we thought there might be some U.S. studio titles in the main International Competition.

CARLO CHATRIAN: In Encounters, there is a film by Universal, The Adults. We put it in Encounters because Dustin Guy Defa is for us still a new emerging voice in cinema. We have two U.S. film productions in Competition, both by young filmmakers.

You will have seen that we’re focusing on youth this year starting from our retrospective (entitled Young at Heart – Coming of Age at the Movies) to our president of the jury (Kristen Stewart) and we have to be consistent with our selection. I think we have to play a role in that.

Celine Song’s Past Lives premiered a few days ago in Sundance and all the reviews are great. John was Trengove at the festival four years ago (with The Wound). He comes back with a new, daring movie with great cast, Jesse Eisenberg, Adrien Brody, and Odessa Young. We have a third English-speaking Canadian production, Blackberry by Matt Johnson. Maybe it’s not the kind of movies that you were expecting, but for me, they are great examples of the fresh vibrant, strong North American titles. Manodrome is produced by one of the most interesting young companies in the U.S. (Riley Keough Gina Gammell’s Felix Culpa in the U.S.).

DEADLINE: You also announced a special screening of Superpower, Sean Penn’s documentary, co-directed with Aaron Kaufman, about his trip to Ukraine and meeting with President Volodymyr Zelenskyy in the early days of the Russian invasion last February. There must have been a lot of competition from other festivals for this film, why do you think the filmmakers decided to debut it at the Berlinale?

CHATRIAN: You should ask them. It’s a project that we were informed of at an early stage already last spring. Of course, we followed it because is very close to here (Berlin), not only from a geographical point of view, there are a lot of refugees in Germany. It’s not only that, I think the offer we made was a good one for them. It’s also very timely, because the festival coincides with the one-year anniversary of the start of the war.

DEADLINE: It’s unlikely, but do think Zelenskyy could come to Berlin for the screening?

RISSENBECK: I can imagine it’s quite difficult for him to travel places with the situation right now. It’s too dangerous. I don’t think he will be here in person. I can’t see how he could make it.

DEADLINE: Do you know yet when it will screen yet?

CHATRIAN: Early on in the festival.

DEADLINE: You mentioned you will be using the yellow and blue colors of Ukraine in the festival this year. Will that be throughout the festival?

RISSENBECK: No. it’s only for our traditional pin in the shape of a Berlinale bear.  We have a different color ever year. It’s the first time we’ve used another country’s national color. There will be lots of other events focused on Ukraine in the European Film Market and the festival.

DEADLINE: You were asked about Steven Spielberg’s attendance in the press conference. You seemed to suggest that he will only be at the festival very briefly, maybe 48 hours.

RISSENBECK: Something like that. I think he is on a longer trip. He will be in different places, and he has very little time.

DEADLINE: Is he giving a Masterclass as well as a press conference?

CHATRIAN: It’s just the press conference and the awards ceremony in the evening.

DEADLINE: Going back to the Competition line-up, the Berlinale has a long tradition of welcoming Arab cinema, so it is surprising that there is not a single title from the Arab world in the Competition. Carlo, you said in the press conference that this was a bit of a “sensitive” topic for you, can you explain?

CHATRIAN: I said that this was one of the elements that is missing from the main slate, not only Arab film, but also African movies. We have to be sure that the films we select are the right fit for the Competition. This year, we have a very strong presence from Asia, Australia. That’s the beauty of the selection each year, that you have a different focus. We don’t do the selection with a preconceived idea of having a little bit of this or that, but rather by responding to the films. I’m sure next year, we will have them again, even if, in the major festivals, it is not that easy to find Arab films in competition, unfortunately.

DEADLINE: Following on from that, the lack of African films in Competition is also surprising because the Berlinale has strong links with Africa through European Film Market and World Cinema Fund initiatives, and channels to filmmakers and projects from this continent.

CHATRIAN: African films this year are quite well represented, but not in the Competition. We have great movies in Panorama: The Cemetery Of Cinema (by Guinean director Thierno Souleymane); Sira, which is a very strong (Burkina Faso-set) Western, and We have All The Colours Of The World Are Between Black And White from Nigeria.

You may see these films and say some of these should have been in Competition. We discussed it and in the end, my feeling was that they were not the right fit. It’s not always the best solution to select a film simply because of the country where it comes from.  But I know that there is more work to be done in order to reach a better representation. At the same time, we don’t work with quotas. It’s important for me, that we don’t put numbers before the films, but we are aware that we have to work together to get a better representation of all the colours and palette that cinema can offer.

DEADLINE: This will be the first fully physical Berlinale since 2020 after it was scaled down due to the Covid-19 pandemic. There is only one film on the topic of the pandemic in the main line-ups, The Walls of Bergamo in Encounters. Did you make a conscious decision to steer away from pandemic-themed films and what stood out about this film?

CHATRIAN: We didn’t receive so many this year, even if we were flooded in the previous two years. To tell you the truth, this film sparked quite a vivid discussion within my team because some programmers asked why we should put this on the table again.

In Northern Italy, it was very, very harsh. You really get the sense of total disorientation. The beauty of the film is that as well as immersing us in what happened in 2020 it also explores how it is possible to overcome that feeling. In that respect, the film is heart-breaking, you see people that survived at different stages as they go back to normal life. You see doctors also dealing with that. For me, it’s a very moving and important thing to be shown especially now that we have a little bit of distance.

DEADLINE: Talking more generally about the role film festivals, you told the press conference that they are now key for filmmakers, even established ones, to connect with audiences. Can you elaborate on that?

I think everyone can see that festivals have become more and more relevant for independent films, not only for the smaller ones. Every independent film, without a festival will see their outreach drastically reduced.

The festival has become probably the best support for independent cinema. It’s good to give room to new voices and this year, we have done a great job. But we’ve also selected Margarethe von Trotta’s film. She’s an established filmmaker, she doesn’t need a festival, but her film does. It’s the only place films can be seen by professionals from all over the world, be reviewed, catch the attention of distributors, and then hopefully be sold, and then watched elsewhere.

DEADLINE: This is the third year of the Berlinale’s gender-neutral acting prizes. So far, only women have won the prizes. Has it worked out as you expected and do you still feel it was the right move?

RISSENBECK: We were the first festival to do this so it got a lot of attention, and then a number of other festivals took the same decision. I think it was the right move. As you said, so far, women have been the winners. This shows that there is no need to think that there has to be a separate competition between women and men when it comes down to acting. We both believe that this was absolutely right to do.

DEADLINE: So you haven’t had any pushback about the fact only women have won?

CHATRIAN: It’s only run during the 2021 and 2022 editions, so it’s a bit early to see a trend. We’ll see how things will go this year with a women president of the jury. But I’m sure that women will want the best actor to win. When Maria Eggert won for I’m You’re Man, everyone thought her performance was a great achievement. I am not concerned about it and others festivals, like San Sebastian and Locarno, have also followed suit. I think we are all going into that direction.

DEADLINE: Today’s announcement brings the total number of feature films announced so far to 293, are you planning any final additions, or is that it?

CHATRIAN: We are happy with this line-up. But you never know. There might be one or two new titles but there will not be a whole new batch of films.