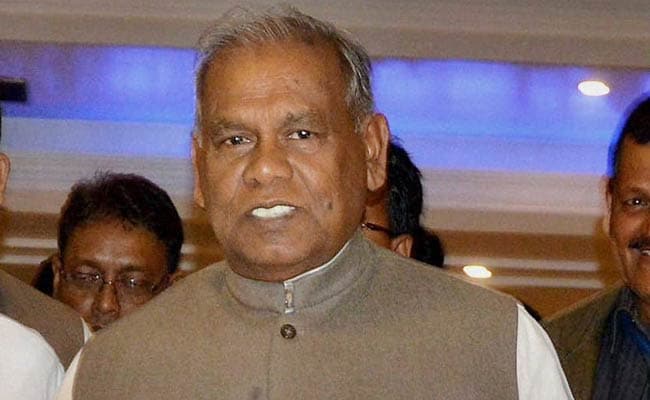 The BJP was on Friday up in arms against former Bihar Chief Minister Jitan Ram Manjhi, its ally in the state, for asserting that Lord Ram was a mythical character and “not a god”.

Mr Manjhi had made the remark in Jamui district on Thursday while addressing a function held on BR Ambedkar’s birth anniversary.

The ex-CM, who heads Hindustani Awam Morcha, had questioned the practice of untouchability and pointed out that as per the epic Ramayana, Lord Ram partook of fruits offered by a forest-dwelling devotee, Shabari.

Legend has it that Shabari, whom Dalits consider a cultural icon, bit every piece of the fruit to ascertain that it tasted well and Lord Rama accepted that without feeling repulsed.

“Why do the upper caste people not follow the example to shun the practice of untouchability? I don’t think Lord Ram was a god. But he was a character of Valmiki’s Ramayana and Ramacharitmanas penned by Goswami Tulsidas. Both works contain valuable teachings,” said Mr Manjhi who belongs to the Musahar community.

The BJP, which owes its rise to the Ram Janmabhoomi movement, came out with angry rebuttals, questioning Mr Manjhi’s own faith and warning him of the damnation that shall befall him for denigrating a divine entity.

Former Deputy CM and Rajya Sabha member Sushil Kumar Modi said, “It is laughable to call oneself a ‘vanshaj’ (descendant) of Shabari but cast doubts on the existence of the one she worshipped.” State BJP spokesperson and OBC Morcha national general secretary Nikhil Anand wanted to know whether Manjhi was an atheist, and, if not, “which god does he believe in”.

Mr Manjhi has been in politics for about four decades but he owes his rise to prominence, to an extent, to the BJP.

A party-hopper who has been with the Congress, the RJD as well as the JD(U), Mr Manjhi floated his own outfit in 2015 after revolting against Nitish Kumar who made him step down less than a year after having handpicked him for the top job.

The BJP, which was then hostile towards Mr Kumar, put its weight behind the aging deposed CM. Notably, Prime Minister Narendra Modi’s infamous “DNA” jibe against Mr Kumar was in the context of Mr Manjhi’s unceremonious removal as CM.

Not known for measuring his words, Mr Manjhi who has clinched a cabinet berth for his son, remains in news for utterances that the BJP finds too hot to handle.

A few months ago, he had used a cuss word against Brahmins, blown hot and cold following a backlash, and tried to bury the controversy by holding a feast in the honor of the community.