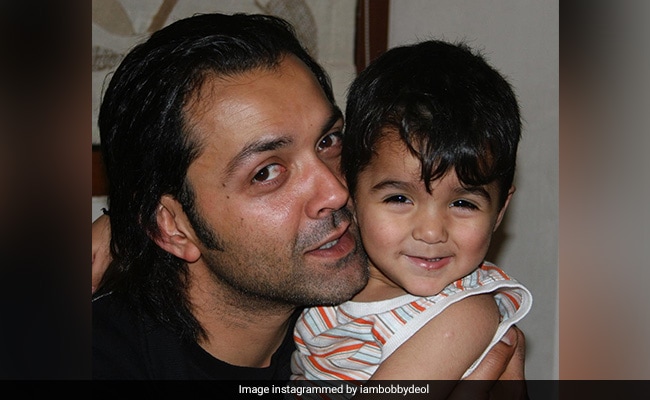 Bobby Deol is super happy today. After all, it is his son Dharam’s 18th birthday. The actor has picked some throwback pictures from his family album to mark the special day. The opening slide features veteran actor Dharmendra and little Dharam spending some quality time. Next, we see Bobby Deol and Dharam sharing a warm hug. Along with pics, Bobby Deol wrote, “Happy 18th my Dharam…Love you, beta.” Replying to the post, Seema Kiran Sajdeh wrote, “Happy 18th my Dharam. Love you loads.” Fans got a glimpse of the amazing bond Seema and Bobby Deol share in the second season of Fabulous Lives Of Bollywood Wives. Actor Rahul Dev too wrote a happy birthday note for the birthday boy. Deanne Panday wrote, “Happy birthday, my darling Dharam.”

Bobby Deol and Tanya Deol are also parents to Aryaman Deol. The actor, on Aryaman’s birthday, this year, picked a beautiful frame to wish his “angel.” His caption read, “Happy birthday, my Angel.”

Bobby Deol never fails to celebrate his family on special occasions. To mark his brother, actor Sunny Deol’s birthday, Bobby Deol shared a still from one of their vacations. Here, the two are seen posing for the lens amid the snow-capped mountains. The caption read, “I love you, bhaiya.” To this, Sunny Deol replied with a love you note.

Now, look at how the Deols celebrated Diwali.  The priceless moment features Sunny and Bobby Deol sharing the frame with their father Dharmendra.

Orange Is The New Black For Priyanka Chopra