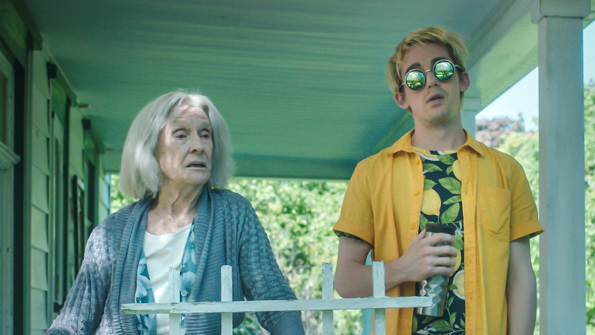 EXCLUSIVE: Breaking Glass Pictures has acquired U.S. rights to Jump, Darling, an LGBTQ+ family drama featuring the final performance of the late screen icon Cloris Leachman (The Last Picture Show, The Mary Tyler Moore Show), with plans to release it in theaters and on digital and VOD in March.

The film written and directed by Phil Connell tells the story of Russell (newcomer Thomas Duplessie), an aspiring actor otherwise known for his drag persona, Fishy Falters. After a disastrous non-debut at Toronto drag club Peckers, Russell leaves his status-conscious boyfriend and takes shelter in Canadian wine country with his grandmother Margaret (Leachman)—a woman coming to terms with her own mortality, who is at the same time determined to hang on to her independence.

While Russell struggles to establish himself at the local dive bar and flirts with not-so-straight busboy Zachary (Kawku Adu-Poku), Margaret fends off the best intentions of her daughter Ene (Linda Kash), who wants to keep her safe by sending her to a retirement home. As tempers wear thin and family secrets are revealed, Russell and Margaret fight to maintain their dignity while being true to themselves.

Jump, Darling made its world premiere at the Toronto Inside Out Film Festival and subsequently went on to screen at festivals including OutFest Los Angeles, where Leachman received a Jury Award Special Mention for performance. The film featuring cameos by well-known drag queens including Tynomi Banks, Fay Slift and Miss Fiercalicious also stars Jayne Eastwood. Katie Corbridge produced, with Karen Harnisch and Allison Black exec producing.

“Cloris was an icon and an ally,” added Connell. “To work with her, to know her, and now to share her final leading performance with the world is a true honor.”

Leachman is an Oscar- and eight-time Emmy winner who enjoyed a 70-plus year screen career. She’s best known on the film side for her work on titles including the late Peter Bogdanovich’s The Last Picture Show. She’s best known on the TV side for her turn as Phyllis on The Mary Tyler Moore Show and its 1975 spinoff, Phyllis. While the actress passed away in January of last year, aged 94, she still holds a record as the actress with the most Primetime Emmy acting nominations in history, having notched 22.

Breaking Glass Pictures is an indie distributor, which Richard Wolff founded with Richard Ross in 2009. Another upcoming title from the company is Paul Riccio’s dramedy Give or Take, starring Norbert Leo Butz, Joanne Tucker and Cheri Oteri, which it acquired in November for a February release.

Motisko and Wolf, who serves as Breaking Glass Pictures’ CEO, negotiated the deal to acquire Jump, Darling directly with Connell and Corbridge of Big Island Productions.