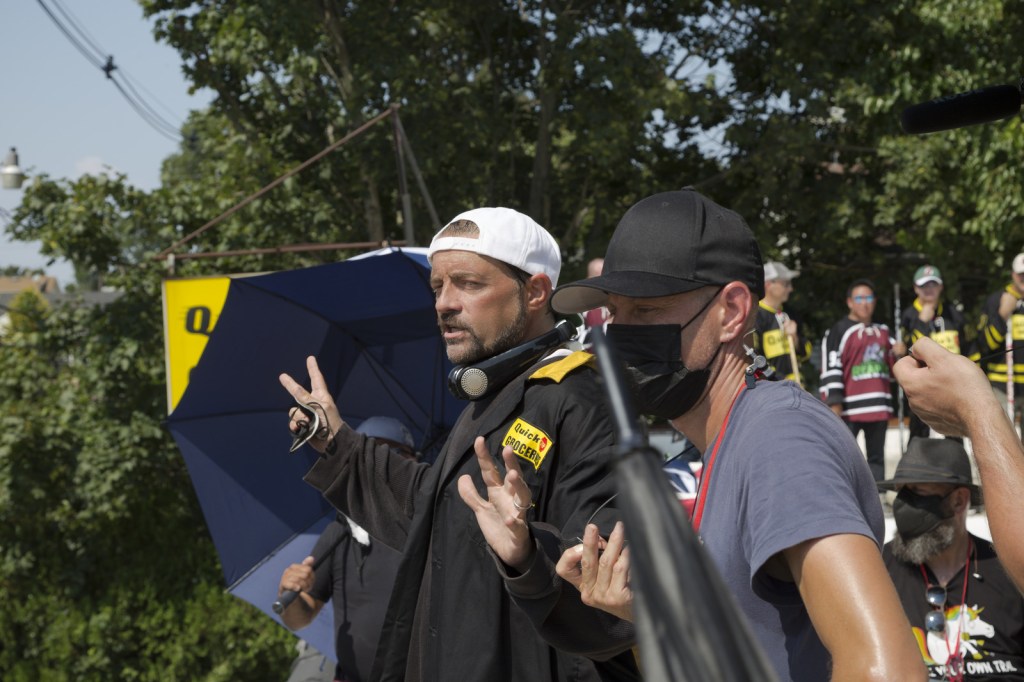 Kevin Smith returned to Comic-Con this year more excited than ever to talk about his work, especially the new Clerks III movie.

The first Clerks film follows Dante (Brian O’Halloran), who is called in to cover a shift at his New Jersey convenience store the Quick Stop on his day off. His friend Randal (Jeff Anderson) helps him pass the time, neglecting his video store customers next door in order to hang out. The uneventful day is disrupted by tragic news for Dante.

Jay (Jason Mewes) and Silent Bob (Smith) were acquaintances of Dante and Randal who would stand outside the Quick Stop and sell weed. The former duo has since appeared in several Smith films, in what he calls the Askewniverse. The latest is Clerks III, which Lionsgate will release exclusively in theaters for two nights in September ahead of a roadshow tour.

I walked into Smoth’s Mooby’s pop-up shop in San Diego this week to interview Smith. Mooby’s is the fictional fast-food restaurant featured in the Clerks and Jay and Silent Bob movies. When I walked in, Smith was on stage signing merch. The place was packed with Clerks, Jay and Silent Bob and Mooby’s memorabilia, a testament to what Smith calls “living in a world I created.”

From the first Clerks film, Smith wasn’t looking to become rich. In fact, he didn’t think any of this would be around for this long. Talking with him made me realize just how surprised he is at his career decades later. In this interview, he goes into detail about the importance of Comic-Con in his life, and why Clerks III is the most emotional film in the franchise.

DEADLINE: How excited are you about being back at Comic-Con after so long?

SMITH: Not having done this for three years kind of ached. But today I got to go on the floor, go to the Lionsgate booth — seeing all the vendors and pieces of artwork brought back all those feelings. I’ve been coming to the Con since 1995, when we screened Mall Rats, so this is a big part of my calendar year. Without it, for the last three years, it’s been an oddly rudderless summer for us. So it’s so nice to be back.

DEADLINE: How do you feel about being a big part of the pop culture lexicon?

SMITH: I worked hard for that! When I started in 1995, I wanted this to be my world. I want to live in this world. I was like, one day, I’ll get there. Once I got there, I never wanted to leave. So I’ve been smearing my feces all over the pop-culture landscape for as long as I can, marking that territory. So getting to a place where you got like chairman emeritus status, and everybody knew and respected, loved you. The plan is working.

SMITH: Never in a million years. When we made Clerks, it was just desperate to see the lives of clerks. I hoped that it would start a career, but there was no sense that this would last that long. In the uncut version of Clerks, Dante gets shot and killed by a robber, but decided against it. Otherwise we would have had to raise him from the dead. It’s nice to be able to go home to those characters, and it’s beautiful that people still give a sh*t about ’em. Never imagined Clerks would take on a life of its own.

I never quite understood why people like Clerks so much. I didn’t think it would play outside of New Jersey because it’s a very regional, workplace comedy. But you don’t have to be from New Jersey to identify with having a job that you hate. It’s a universal truth for most people. Being able to turn that experience into a trilogy was great.

DEADLINE: Clerks also speaks to doing the things you love as well, right?

SMITH: I spent an inordinate amount of time in customer service, and this industry is also all about customer service. Like suddenly, you know, the idea of like “the customer is stupid”; like, no, no, no the customer is literally my boss this time around because I don’t have an employer, I just have the audience. The irony is not lost on me man, that I hated working, but like I worked 10 times as hard as I ever worked [in his movie career]. But it doesn’t feel like work because it’s like the Kevin Smith business.

DEADLINE: When I look at the Clerks universe, especially Jay and Silent Bob, I notice subtle differences each time we see them on screen. They’re getting older, and their circumstances always reflect that.

SMITH: Well, if the first Clerks film was them trying to deal with life in their 20s, and Clerks II was dealing with life in their 30s, Clerks three is definitely trying to deal with life in their late 40s, early 50s. They’ve gone from two knuckleheads who just don’t really want work, to owning the store. We’re our own bosses. We get to see what happens after they bought the store, how they’ve been running it, and what happens to those of us who enter midlife in a health crisis. I gave my heart attack scenario to Randal in the movie and let him use that as the inspiration to make a movie.

DEADLINE: I heard you’ve been trying to make Clerks III for a while now.

SMITH: I’ve been trying to make Clerks III since we finished Clerks II in 2006. It took me a while to get there and through a couple different iterations of what it would be. Then post-heart attack suddenly I was like, “I’m going use that story with these guys now.” I am thankful for the good folks at Lionsgate. They had done our home video for Jay and Silent Bob Reboot, which was the last time I was here at the Con in 2019.

[The movies] did really well with the DVD and Blu-ray sales because there’s a bunch of people out there who still like a hard piece of media. And they were like if you have another one of these movies under this price point, we’ll do it in the heartbeat. It worked out kind of well, and the reboot paved the way for this. I love how it turned out.

DEADLINE: There must have been some fear there with going at this for a third time.

SMITH: I was so scared that other people would just be annoyed but man, fans have really gone for it, which just makes you feel all is possible. I saw a tweet from somebody today that was like watching that trailer and it reminded me how much I wanted to make movies when I was a kid. When the job goes from being something you have to do to something you wanna do, you’re breathing rare air in life. If the Clerks story should communicate anything to anybody, it’s that everybody’s story is interesting.

DEADLINE: Working with small budgets is your thing, right? Most of your filmography is made within strict financial guidelines. Can you talk about how you make that work for you and your content?

SMITH: I work cheap. I’m not a person that takes more than needed, and always trying to figure out how to do it for less. Clerks was made for 27 grand on credit cards, so it baked into my creative DNA. I found a way that like, if we made it for like $5 million? That was the budget for Clerks II, and part three was made for roughly $7 million because of inflation and Covid cost. The studio was game because they saw it as low-risk. I keep the budget low enough, they’re gonna make their money back and you get to live another day. Our biggest special effect in this movie is we shot in color, but sometimes we turn the color off and the shots go to black and white. Right? Right. So whereas in the first movie we had no choice but to be all black and white, here, now at least, we have a choice.

DEADLINE: Are there any surprises that you can speak of that fans can expect in Clerks III?

SMITH: Bring tissues! It’s an emotional movie. When I made Clerks, all I thought about was how to make people laugh. Now with Clerks III, I’m like, how do you make people feel something? Aging has this incredible sentimental wave to it. It’s fun, but it sneaks up on you. I was pretty proud of that.

DEADLINE: What does the future look like for Kevin Smith?

SMITH: I think being as little trouble as possible as a filmmaker, as a storyteller, has allowed me to stay afloat in a business. I’m still out here doing this. I mean, a lot of people criticize me for this, but I’m still out here doing the same thing I was doing in like 1994. I haven’t had to adapt or change. That was the thing I always loved about the Coen Brothers. When they debuted, they did something so different and weird and everybody’s like, well, they’re gonna have to change to continue working in this business–but they never did. They just kept doing their thing.

You can stretch one joke into a long joke of a career. I still love storytelling and it is easy to figure out. You just have to modify your expectations. Something I learned from my wife. I can’t imagine leaving this job because I want to be like Robert Altman and work until I drop dead. Somebody told me the other day, “You enjoy it all so much because you found a way to make yourself the center of attention at all times. I look around and I’m sitting in a room that is covered with images of you and all your movies.” I am living in a world that I created.