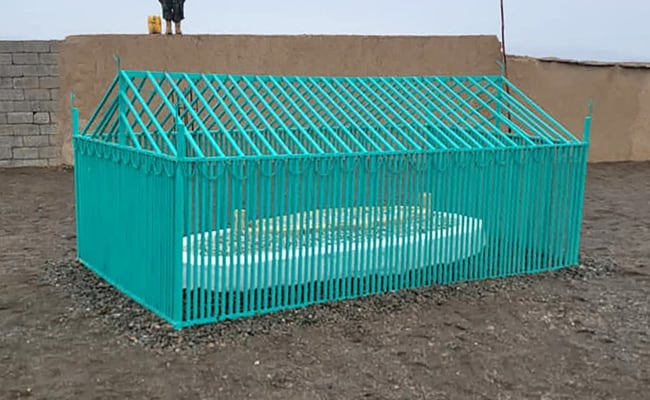 “Only the close family members were aware of the place,” Taliban spokesperson said.

The Taliban on Sunday revealed the final resting place of the movement’s founder, Mullah Omar, whose death and burial they kept secret for years.

Rumours surrounding Omar’s health and whereabouts abounded after the Taliban were kicked out of power in 2001 by a US-led invasion, and they only admitted in April 2015 that he had died two years earlier.

Taliban spokesman Zabihullah Mujahid told AFP Sunday that senior leaders of the movement attended a ceremony at his gravesite earlier in the day near Omarzo, in Suri district of Zabul province.

The Taliban returned to power in August last year, routing government forces as the US-led military that propped up the regime ended a 20-year occupation.

“Since a lot of enemies were around and the country was occupied, to avoid damage to the tomb it was kept secret,” Mujahid said.

“Only the close family members were aware of the place,” he added.

Pictures released by officials showed Taliban leaders gathered around a simple white brick tomb, covered with what appears to be gravel and enclosed in a green metal cage.

“Now the decision has been made… there are no issues for the people to visit the tomb,” Mujahid said.

Omar, who was aged around 55 when he died, founded the Taliban in 1993 as an antidote to the internecine civil war that erupted following the decade-long Soviet occupation.

Under his leadership the Taliban introduced an extremely austere version of Islamic rule, barring women from public life and introducing harsh public punishments — including executions and floggings.

Omar’s ceremony comes a day after provincial Taliban officials denied reports that the Panjshir Valley tomb of resistance hero Ahmad Shah Massoud had been vandalised, an act Mujahid said would be “punished” if true.

Massoud has a mixed legacy in the country, where he is hailed by ordinary Afghans for leading the resistance against the Soviet occupation, but loathed by the Taliban he also fought until his 2001 assassination by Al-Qaeda.

His tomb is in an imposing granite and marble mausoleum overlooking the picturesque Panjshir Valley, and guarded by Taliban fighters since their takeover of the country in August last year.

Local residents said a newly arrived contingent of fighters smashed the tombstone, and video of the desecrated grave — which could not be verified — was published by local media and circulating widely on social channels.

“It happened when the new forces entered Panjshir. The new forces from Helmand and Kandahar destroyed the tombstone of the national hero,” one resident told AFP.

Nasrullah Malakzada, head of information and culture of Panjshir, province, denied the tomb had been damaged and issued a video purporting to show it intact.

The clip, however, pointedly did not display the entire structure — particularly the part seen damaged in the original video.

Malakzada refused requests by journalists to visit or photograph the tomb for themselves.

Mujahid told reporters that nobody had the right to insult the dead.

“Previously we had punished those who committed such acts,” he said, adding “this will be investigated as well and necessary action will be taken”.

Woman Slaps Journalist On Being Asked About Viral Car Video