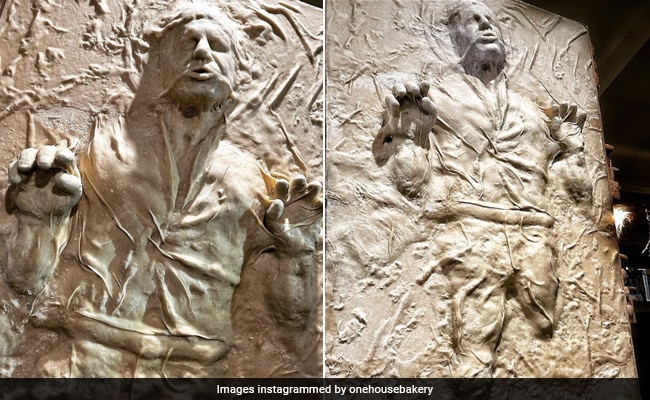 Talented artists around the world never fail to amaze us with their creativity. An artwork created by a bakery in the San Francisco Bay Area proves this right – it is six-foot character based on Han Solo from “Star Wars”, appearing after being trapped in carbonite. The artists have named him “Pan Solo”.

According to a report in Fox8, the creation has been made by Hanalee Pervan and her mother, Catherine Pervan, who co-own One House Bakery in Benicia, California. The duo worked for weeks sculpting, baking, and constructing the giant masterpiece with two varieties of dough, including a yeastless dough with a greater sugar content that would keep longer.

Their amazing sculpture was made for the annual Downtown Benicia Main Street Scarecrow Contest. A few pictures of the masterpiece have been posted by the bakery on Instagram six days ago. The duo used to work at night after the day’s job getting over.

While sharing the post, they wrote, “Introducing… Pan Solo!!!! This is our entry to the Scarecrow Contest @beniciamainst!! Pan Solo has been encased in levainite. I know, we’re giant nerds! @catherinepervan and I created Pan out of bread dough!! Make sure you give us a vote if you like him!!”

The masterfully made features depict Han Solo’s anguished expression and his hands struggling to reach out.

According to the outlet, Ms Pervan admitted to being a little obsessive with the sculpture.

After a month of hard work, the giant sculpture was placed outside the bakery on Sunday beside a seasonal gourd display and a chalkboard that said, “Our hero Pan Solo has been trapped in Levainite by the evil Java the Hut,” according to a report in New York Times.

The family bakery was established by the duo in 2018. Earlier they also made Game of Scones, which featured a bread White Walker next to an iron kingdom of baguettes.