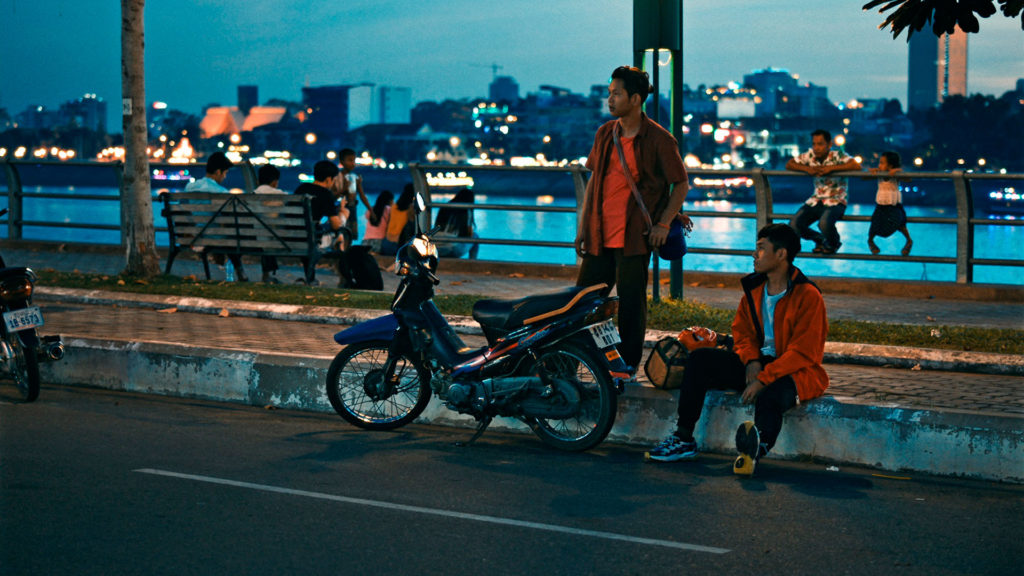 The eponymous edifice of Cambodia’s International Feature Oscar entry, White Building, is barely white at all by the time we encounter it. A low-rise apartment block in Phnom Penh — the sort of teeming anthill of humanity familiar to anyone who has spent time in a South East Asian city — it is stained with tropical rain, its cement falling off in chunks, its cat’s cradles of improvised electrical wiring truly shocking, in every sense of the word. Director Kavich Neang grew up here.

The building was demolished in 2017 to make way for something more profitable but, before that happened, Neang filmed it from every angle. His film gives it a second, fictional life as the center of a story of a community in quiet crisis. Most of the people living in the white building’s apartments are current or retired government employees and their families; inner urban life is all they know.

Our guide to this is young Nang (Piseth Cchun, who won the Best Actor award in the Horizons section of the Venice Film Festival for his unhurried performance) who is the moving force in a dance crew, his eyes fixed on the prize of Cambodia’s Next Superstar. Riding three-up on his scooter through the night markets, he and his pals are as recognizably part of the streetscape as the building itself.

Nang’s dad (Sithan Hout) is generally recognized as the chief of the residents’ association. He is thus in the uncomfortable position of negotiating with the developers who, as in real life, have bought the building and intend pulling it down. Of course, they are offering a pittance in compensation. The residents meet to put forth their cases for taking the deal offered or holding out for more. There are no direct confrontations, but Nang’s dad looks harried. Weak with diabetes that is rotting one of his feet, he is not up for a fight. Nobody is.

The family is spliced with other fault lines. Nang’s sister has moved out and is not speaking to her mother, for reasons unspoken but easily guessed. Mother (Sokha Uk) is fractious and demanding, knowing her nest is not just emptying but falling apart. Being forced to move somewhere else — and where? — will permanently cleave the family in two. Father cannot bear even to think about his diabetes. When Nang finally drags him to a doctor who tells him he might lose his leg, he says he will just see what happens if he applies a honey tincture. Endings are inevitable, after all.

Western audiences may be frustrated by this creeping lassitude, which not only afflicts the characters but the structure of the film itself. White Building sets up problems and proceeds not to solve any of them, which runs directly against cinemagoers’ expectations. There is no moment when a hero steps up. Nobody in White Building does much at all, in fact; the story simply decelerates. There is a third act in which things are resolved, but only because time and off-screen events have made everyone’s decisions for them.

This is a sort of realism, of course, delivered at the contemplative pace and with the lingering, resonant images that brand it as slow cinema. Along the way, moreover, Neang shows a remarkable confidence as a first-time feature director in conveying, through expertly timed silences and pauses, the tension seething below the smooth surface of things. To hold a shot long enough to twist the knife of discomfort, then move on: that shows a control that marks him a director to watch.

He will even pull back from the narrative altogether, usually to show us another shot of the building. Consider those cracks, he seems to be saying. There is so much life between them. No surprise, then, to see Chinese director Jia Zhangke’s name in the credits as a co-producer; he has told his own, rather more sophisticated stories of the cost of accelerated development in Beijing. Not that you need to go to Asia to see what the spread of glass and steel does to communities. For all the specificity of Nang’s family and of Cambodian culture, this is a story that could be told pretty much anywhere.