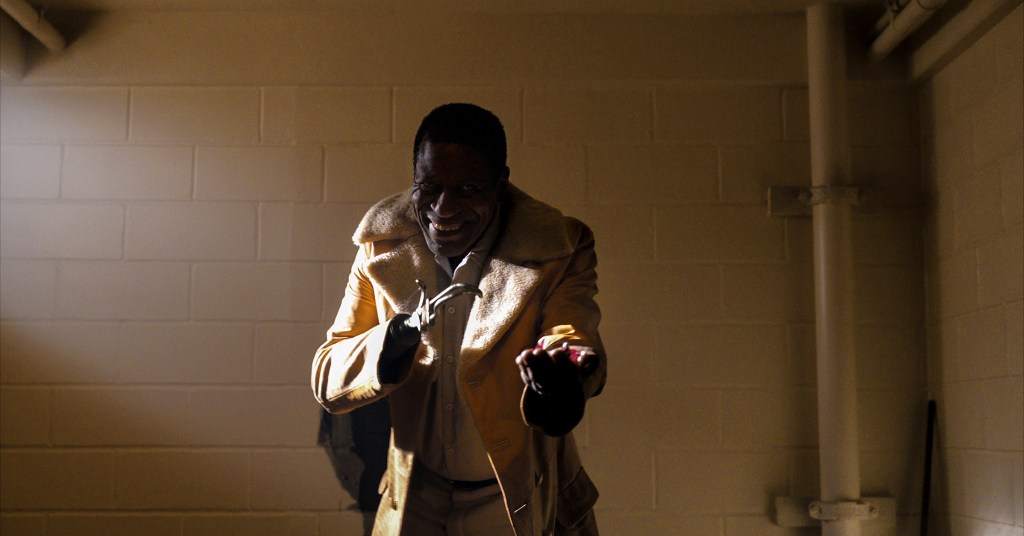 Saturday AM Update: Refresh for more analysis and chart In the wake of a CinemaCon which rallied hopes that exhibition would indeed rise from the ashes of a pandemic and an industry intoxicated by streaming comes Universal/MGM/Monkeypaw’s reboot of 1990s horror IP Candyman which is bound for a $20.7M weekend opening. Not only does the debut indicate the continued appetite for moviegoing among the 18-34 bunch, which turned out at 71% here, but it’s a solid opening for a horror movie during late August, which isn’t exactly a primetime for the box office. Candyman is on a theatrical window. The movie grossed $9.1M at 3,569 locations on Friday, which includes those $1.9M Thursday previews.

Uni has a great start here heading into the fall box office, which many are hoping becomes redefined in a great way by Disney over Labor Day with Marvel’s Shang-Chi and the Legend of Ten Rings; that pic wowing exhibitors over at CinemaCon and currently counting a 91% Certified Fresh score on Rotten Tomatoes.

The Jordan Peele brand here on Candyman as producer and co-writer make a difference, coupled with great reviews now at 85% certified fresh on Rotten Tomatoes. The audience scores are a bit less stellar than the critical praise, so hopefully that doesn’t diminish Saturday night business with the Nia DaCosta directed and co-written feature getting a B CinemaScore, average for a genre pic, and a 72% positive score and 56% recommend on Comscore/Screen Engine’s PostTrak. Big diverse turnout here for the horror film starring HBO Watchmen‘s Yahya Abdul-Mateen II with 37% Black, 22% Latino, 29% White and 12% Asian/other turning out. Candyman leaned toward males at 53%, with close to 60% over 25. The horror pic played best on the East and West coasts and the South. The Mid-West was also very strong with Chicago slotting five out of the top ten theatrical runs. Premium large format screens are currently driving close to a quarter of all domestic ticket sales.

According to Market Insights firm EntTelligence, Candyman scared up evening audiences with over 35% of attendees showing up at the theater after 9PM. Sony’s Don’t Breathe 2hovered around 31% during the same evening hours. Those late nighters paid an average ticket price of $13.72 compared to the daily average of $12.60. As the new wide lone release, Candyman commanded near 43% of all patrons going to the top 10 movies on Friday followed by Free Guy with 21%, and Paw Patrol with 10.5%. Newcomer limited release Un Rescate de Huevitos by Panteleon drummed up $12.10 per person for the sequel. EntTelligence uses proprietary technology, machine learning and moviegoer analysis which includes on-site ticket price verification to create its metrics and insights.

Also amazing here at in the late summer frame is the third weekend hold of Disney/20th Century Studios’ Free Guy which is expected to ease -30% in weekend 3 with $12.9M. The Ryan Reynolds movie will stand at $78.7M by the end of the weekend. Yesterday the pic grossed $3.6M at 3,940 theaters, -31% from its second Friday.

Other Disney exclamations include Jungle Cruise which will stand $300K short of the $100M by EOD Sunday. Despite the great hold on this Dwayne Johnson-Emily Blunt theme park inspired adventure, which in weekend 5 at 3,370 theaters is expected to do $4.6M, -26% in 4th place, we cannot deny the fact that the gross for this movie would be significantly more, and would have crossed the century mark faster, without its day-and-date on Disney+ Premier for $29.99. On the plus side, Jungle Cruise will hit $100M in roughly 33 days, which is significantly shorter than the time it took Johnson’s Rampage which was well over 105 days. However, other Johnson fare outside the Fast and Furious franchise, has been lightening quick to $100M, including San Andreas (11 days), Jumanji: Welcome to the Jungle (8 days) and Jumanji: Next Level (10 days).

Paramount/Spin Master’s Paw Patrol in third place at 3,189 locations posted a second Friday of $1.75M, for a 3-day of $6M, -54%, for a ten-day of $23.4M. The pic is available free in-home to Paramount+ subscribers. Despite the day-and-date release of the animated feature, and it’s unavailability at Regal Theaters, exhibitors at CinemaCon were rather happy with the pic’s performance last weekend.

Friday AM Update: Universal/MGM/Monkeypaw’s reimagination of the cult classic horror movie Candyman posted $1.9 million on Thursday from 2750 theaters off shows that began at 7 p.m. The pic, in a recent rare feat for horror pics, has an 86% certified fresh score on Rotten Tomatoes.

Interestingly enough, another critically acclaimed horror release that played the late August period in 2016 off an 88% certified fresh RT, Don’t Breathe, turned into a $26.4M opening and ultimate $89.2M final domestic, a nice sleeper to tee off the fall. Candyman‘s Thursday night beats that of Don’t Breathe, which was $1.875M.

Candyman is set to gross in the mid-teens, though there’s the feeling that this Jordan Peele-produced and co-scripted movie with director Nia DaCosta can overperform, and after Free Guy‘s hold, it’s another vibrant sign for a box office that’s looking to return to some normalcy. Males between ages 17-34 are the prime demo here, and well, that’s who’s been unafraid to head to the cinema during the pandemic.

The R-rated pic will play in 3,569 theaters today, and it’s the weekend’s only wide release. Uni held this for a theatrical release during the pandemic, but I also hear that the co-production with MGM here prevented the title from going on day-and-date streaming or PVOD.

Candyman beats other summer pandemic Thursday night previews for horror fare including Uni/Blumhouse’s The Forever Purge, which did $1.33M heading into the July 4 weekend. That turned out to be a $5.7M opening day and $12.5M weekend opening. Also, Sony’s Escape Room: Tournament of Champions, which posted $1.2M, and the studio’s Don’t Breathe 2, which posted $965K on their first Thursdays. Escape Room 2 posted a $3.8M Friday, a $8.8M opening weekend and has a current running domestic of $25.1M. Don’t Breathe 2 did $4.39M on its opening Friday, $10.6M over its opening weekend and a $21.7M running total through its first two weeks.

Again, we can compare to pre-pandemic grosses so we can see how much we are above water: Candyman‘s Thursday night bests Get Out‘s $1.8M Thursday (granted, that pic became a social phenomenon heading to $33.3M debut).