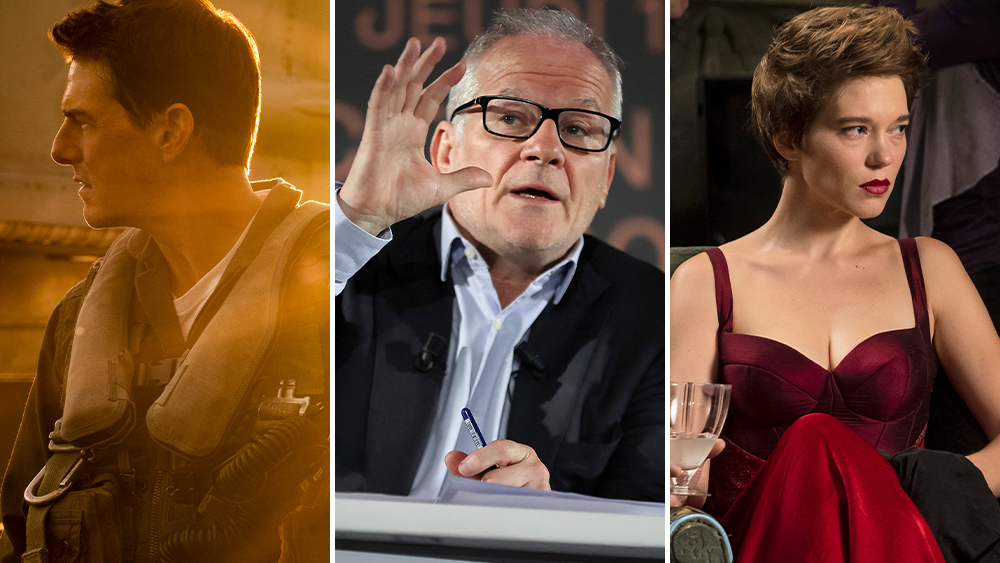 When we sit down with Thierry Frémaux he is in pensive mood. As is his wont.

Perhaps more than ever, the longtime Cannes Film Festival artistic director says he and his team of selectors were given pause for thought this year. In the age of Twitter and TikTok, do audiences still want to connect with the demanding art of auteur filmmakers?

This was just one of the subjects of our chat following Thursday morning’s Cannes lineup reveal in Paris.

On the whole, the event’s 75th anniversary selection doesn’t disappoint. The Competition features four previous Palme d’Or winners: Hirokazu Kore-eda, Cristian Mungiu, Ruben Ostlund and the Dardenne brothers. There are fresh faces and heavyweights. Stars set to tread the carpet include Tom Cruise for Top Gun: Maverick, Kristen Stewart and Lea Seydoux for David Cronenberg’s Crimes Of The Future and Idris Elba and Tilda Swinton for George Miller’s Three Thousand Years Of Longing. Baz Luhrmann will be on the Riviera with Elvis, Park Chan Wook returns with drama Decision To Leave and Ethan Coen will bring a documentary about Jerry Lee Lewis. There is Claire Denis and Kelly Reichardt.

Frémaux and others have said before that these are structural and grass roots issues for the industry. Some say that those in positions of great power have extra responsibility to effect meaningful change. Rightly, that debate will rage on.

Frémaux himself is not afraid of debate or change. As he has said before, if it were up to him, Netflix would be at the festival. The streamer’s ban from taking part in the Competition comes from the board, rather than the longtime artistic director. In other ways, the festival is moving with the times. Cannes has for the first time tied up with video-focused social networking platform TikTok in a bid to connect with new generations of (very short) film lovers. Don’t expect to see Frémaux posting videos of himself dancing down the Croisette, however. We hear he doesn’t yet have an account.

Below is our interview.

DEADLINE: How are you feeling about the lineup?

THIERRY FRÉMAUX: We’re happy. But you know, it’s interesting, with these types of films, the films of auteur cinema, we ask ourselves, “Do we still have the audience for these films?” We are in 2022, the 23rd year of the 21st century. When we talk about Fellini, we’re going back 60 years. It’s one of the questions we had during the selection process. About the relationship between the audience, press and auteur films and organizers. We used to have a common culture but in what shape is that culture after the pandemic crisis and amid an uncertain future…

DEADLINE: Well, in some senses Twitter is a crucible for contemporary culture. If you look at the buzz on Twitter in the film world in the last week it has been about David Lynch, and today for the first trailer for David Cronenberg’s Crimes of the Future. These are two arthouse, auteur directors. That’s reassuring: that there is great buzz even if Cronenberg’s movie looks like a challenging and authored movie, as you would expect…

FRÉMAUX: It’s a wonderful film. It’s very sad, like it’s a testament. That’s not to say David’s career is over, far from it. He has another project in production now. … You know, I’ve been asked by some filmmakers — David included — to take a look at their projects when they’re not finished, to give them some feedback. But I say, “How can I say anything, this is so personal, it’s you, it’s what you wanted to tell. I shouldn’t tell you anything because it’s your own work”…

DEADLINE: Well, that’s partly why filmmakers always want their movies in Cannes. Because it’s the high church of cinema. It’s somewhere where there is a particular reverence for the filmmaker…

FRÉMAUX: The only name mentioned in the theater in Cannes is that of the filmmaker. If Brad Pitt is working with a first-time director, it’s the filmmaker whose name will be echoed by us in the cinema.

DEADLINE: There will be a few additions next week, right?

FRÉMAUX: Yes, especially French cinema because some things were late, as always. It’s good to be able to deliver the majority and then to work all weekend and re-look at things and give them another appraisal…

DEADLINE: Any big names to be added?

FRÉMAUX: No. … We’re not waiting for a ghost movie from David Lynch [laughs]. I used to talk to David quite often and he has never mentioned anything like that.

DEADLINE: So there won’t be a Cannes Classics David Lynch entry or something else?

FRÉMAUX: No, nothing like that…We still need to confirm the Classics lineup in fact. We have almost 200 entries, which is incredible. We used to only get 15. It’s a real selection now and it’s complicated. It’s important to show movies from all over the world. Each country has their own masterpieces.

DEADLINE: We know that like many people you read some of the Cannes prediction stories. How does it make you feel when journalists get big name inclusions wrong?

DEADLINE: When will we know the jury president and why has it taken longer this year?

FRÉMAUX: Very soon. We focused a lot on the films and wanted to make sure we got the films out on time above all.

DEADLINE: It feels like this could be an emotional festival. You have a movie about the hunt for the Bataclan killers, you have movies from Ukrainian and Russian filmmakers. This will be a festival of reunion under the sun but these are serious subjects that will be heavy for audiences too…

FRÉMAUX: Cannes has always been very political. The filmmakers coming to Cannes that is. This year we feel more and more responsibility and concern for what is happening in the world. The war will likely still be going on in one month. Wars have always existed, all over the world, so we should be aware of that, but of course this has a particular resonance for us because it is in Europe. It’s ironic that Kirill Serebrennikov couldn’t come for years but now because of the war he is able to come as an exile from his country. We have made our statement about boycotting official Russian delegations and in support of Ukraine and the Russian dissidents…

Loznitsa will be here with a movie and has made movies in the past such as Donbass, about the conflict with Russia. Ironically, there was less attention for that movie then than there would be now. But we also have the film Butterfly Vision in Un Certain Regard from first-time Ukrainian filmmaker Maksim Nakonechnyi. It’s a very interesting film. We didn’t choose it in tribute to Ukraine. We chose it because it’s a very good film. The young actress in it is incredible. But this film is about cruelty, war, pain.

DEADLINE: So those are two hidden gems in the lineup, the director and actress…

FRÉMAUX: Yes. We’ll see how it goes. The film is very auteur, but very current. It could have been made yesterday.

DEADLINE: We broke the story a couple of days ago about the Marché hosting a Ukraine Day of industry events. Will the festival do something similar or have a special event in honor of Ukraine?

FRÉMAUX: Yes, we are working on that. We’re working on more than that. But we didn’t want to discuss that today. Today it was about the movies. We haven’t had a lot of accreditation requests from Ukraine for obvious reasons.

DEADLINE: You have your planetary blockbuster in the shape of Top Gun: Maverick. Have you spoken with Tom Cruise?

FRÉMAUX: Not over the phone, but we’ve exchanged messages. The first time I wanted the movie, Jim Giannopoulos was in charge, which gives you an idea of the time that has passed. I’m close to Jim from when he was at Fox and we had Moulin Rouge!. Then Top Gun was postponed but came back into our sights. I’m happy because the movie is very good and I’m happy to be able to spotlight Tom Cruise. In terms of working on big canvas cinema and being a producer of cinema, his quality of work is incredible.

DEADLINE: Could we see a stunt or flyby of some kind in relation to the film?

FRÉMAUX: We’re thinking and working on that but let’s see. There have been discussions with the French military but nothing is set at all.

DEADLINE: And the Russians are the enemy again in the movie. Pretty timely…

DEADLINE: Has anything surprised you in the lineup?

FRÉMAUX: The level of directors is very high so on one level it isn’t surprising as such, but then when you see a film like Park Chan-wook’s and see how faithful it is to cinema, it looks like it could have been made 40 or 80 years ago and yet it’s very modern. The Serebrennikov is a very good period film about Tchaikovsky’s wife. The Dardenne brothers, of course. They maintain such a great level. Jury members always respond so well to them even for those who haven’t seen many of their movies.

DEADLINE: How do you feel about the number of women directors in Competition?

FRÉMAUX: It’s somewhat nonsensical to count the number. But the selection is not finished also. We have three female directors in competition at the moment. I hope to have more. Last year most of the big prizes went to women, including the Palme d’Or. That’s a statement. Things are getting better. What we saw, we were very happy with. This is a good moment for French female directors, from the young ones right up to the great Claire Denis.

DEADLINE: What Covid protocols can we expect?

FRÉMAUX: Whatever the laws are in France, we’ll need to follow. Last year we managed to keep numbers low at the festival. And we provided for all the tests. It was safe. It will be different this year but I don’t want to say this thing is over. It isn’t.

DEADLINE: In terms of your own contract with the festival, how long do you have left?

FRÉMAUX: I don’t have a contract by year, per se. There’s no fixed time. I’m here and I’m happy to be here. If the board, the press or if myself, I get tired of Thierry Frémaux in this role, then it’ll be time to go. But I’m here for now.