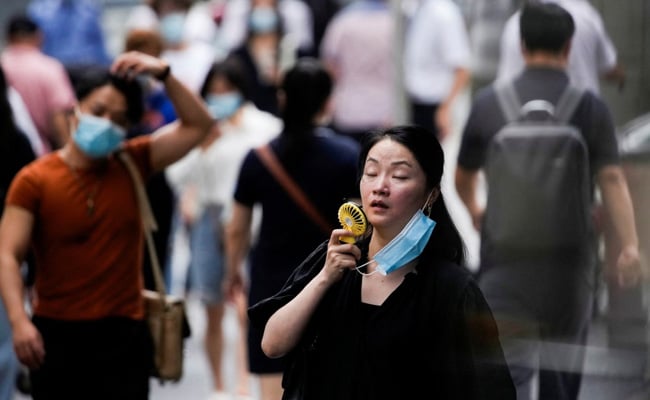 China is experiencing second heatwave of the month. (Reuters Photo)

Large swathes of the planet are reeling under record heat. It started with Europe, where temperature records were broken in the UK and many other countries. Almost simultaneously, extreme heat alerts were issued across the Atlantic Ocean, in North America. And now, China has issued highest heat alert for almost 70 cities as latest heatwave takes hold of the country, CNN said in a report. Parts of China are set to experience searing temperatures over the next 10 days, according to the country’s meteorological department.

The weather department has said in its forecast that temperature is expected to cross the 40 degrees Celsius-mark in these cities, CNN further said, adding that another 393 Chinese cities and counties are set to experience temperature of 35 degrees Celsius and above.

The national government has also warned that forest fires could occur due to extreme heat, a report in the BBC said.

This is the second heatwave of the month. Average temperatures are highest since 1961 and on Sunday, at least 13 weather stations in Zhejiang and Fujian provinces broke the local temperature records.

In Zhejiang, in the south-east, some cities are issuing red alerts, the highest warning, said the BBC report.

According to local weather report, the province usually experiences temperatures in the 20s in July but this year, authorities are warning of the levels reaching 40 degrees Celsius.

Scientists say the extreme weather has become more frequent due to climate change, and will likely grow more intense as global temperatures continue to rise.

But in China, temperatures have been rising faster than global average and the latest heatwave has raised new concerns.