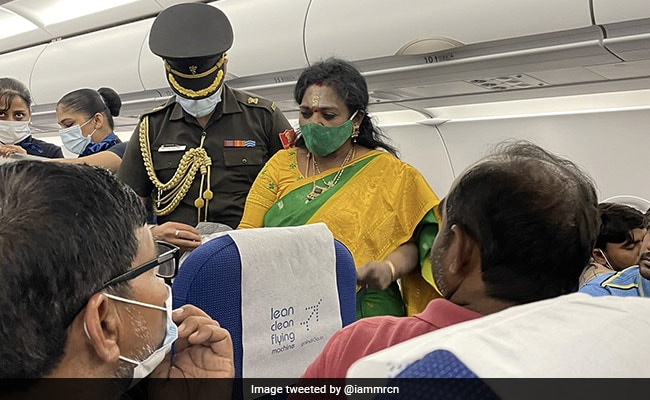 Governor Tamilisai Soundararajan attended to the IPS officer after he complained of uneasiness.

Telangana Governor Tamilisai Soundararajan discharged her duties as a doctor and saved the life of an Additional Director General of Police-rank IPS officer onboard an IndiGo airlines flight from Delhi to Hyderabad.

Kripanand Tripathi Ujela, a 1994-batch officer, is now undergoing treatment in a hospital in Hyderabad after being diagnosed with dengue fever.

“Madam Governor saved my life. She helped me like a mother. Otherwise, I could not have made it to the hospital,” Ujela told PTI over phone from Hyderabad on Saturday.

The Governor, who is a doctor by profession, attended to the IPS officer after he complained of uneasiness during the flight to the Telangana capital around Friday midnight.

Today I have onboarded with @DrTamilisaiGuv and she treated a patient who fell ill on Air on Delhi-Hyd bound flight. @IndiGo6E@TelanganaCMO@bandisanjay_bjp@BJP4India@TV9Telugu@V6Newspic.twitter.com/WY6Q31Eptn

“My heart rate at that time was just 39 when Madam Governor measured it. She advised me to bend forward and helped me relax, which stabilised my breathing,” Ujela said.

Upon landing in Hyderabad, he directly went to a hospital where a series of tests were conducted on him.

He was diagnosed with dengue and his platelets count dropped to 14,000.

“Had Madam Governor not been on that flight, I could not have made it. She gave me a new life,” Ujela said, expressing his gratitude to Soundararajan.