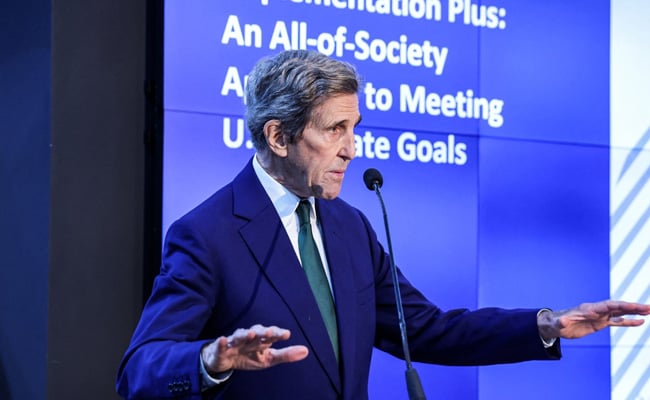 John Kerry was speaking on the sidelines of the UN’s COP27 climate summit in Egypt.

The United States sought to reassure the UN climate summit in Egypt on Tuesday that it will stick to its energy transition even if Republicans triumph in midterm elections.

The COP27 talks have been dominated by calls for wealthier nations to step up their commitments to cut greenhouse gas emissions and fulfil pledges to financially help poorer nations green their economies.

Developing countries devastated by natural disasters have argued for a windfall tax on the profits of oil companies and demanded that rich polluters compensate them for the damage caused by their emissions.

But the US midterm elections have also loomed large over the summit as President Joe Biden’s Democrats face a tough battle to hang on to their majority in Congress against Republicans, who are less favourable to international climate action.

A Republican victory could be a boon to the ambitions of former president Donald Trump, who is expected to make another bid for the White House.

The “climate crisis doesn’t just threaten our infrastructure, economy and security — it threatens every single aspect of our lives on a daily basis,” Kerry said on the sidelines of the summit in the Red Sea resort of Sharm el-Sheikh.

He said that even if Democrats lose the election, “President Biden is more determined than ever to continue what we are doing.”

“And most of what we are doing cannot be changed by anybody else who comes along,” Kerry said. “The marketplace has made its decision to do what we need to do to respond to the climate crisis.”

Some 100 world leaders were attending the summit on Monday and Tuesday but Biden will only come on Friday after the midterms. He then heads to Cambodia for the annual US-ASEAN summit and then on to Indonesia for a G20 summit.

The first day of the summit was marked by dire warnings from UN chief Antonio Guterres, who told the COP27 that humanity faces a stark choice: “cooperate or perish”.

Nations worldwide are coping with increasingly intense natural disasters that have taken thousands of lives this year and cost billions of dollars.

They range from devastating floods in Nigeria and Pakistan to droughts in the United States and several African nations, as well as unprecedented heatwaves across three continents.

Countries are under pressure to step up efforts to reduce emissions in order to meet the ambitious goal of preventing temperatures from rising by more than 1.5 degrees Celsius above the pre-industrial era.

A UN-backed report said Tuesday that developing countries and emerging economies, excluding China, need investments well beyond $2 trillion per year by 2030 if the world is to stop the global warming juggernaut and cope with its impacts.

One after the other, leaders of developing nations called for the establishment of a “loss and damage” fund that would compensate them for the destruction caused by natural disasters, arguing that rich nations are responsible for the biggest share of emissions harming the planet.

Antigua and Barbuda Prime Minister Gaston Browne — speaking on behalf of a group of small island nations endangered by rising sea levels and tropical storms — said it was time to tax the windfall profits of oil companies to pay for loss and damage.

“While they are profiting, the planet is burning,” Browne told fellow leaders.