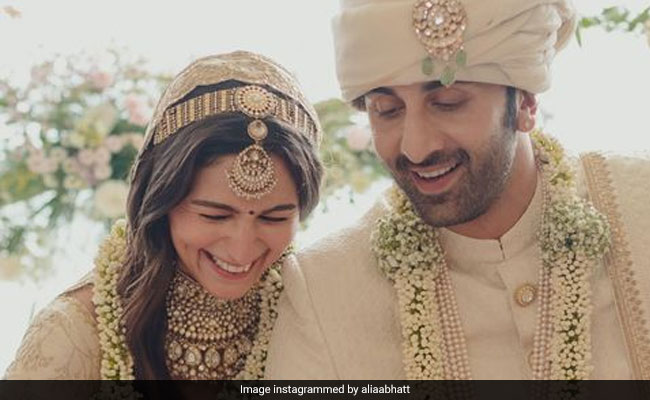 Ranbir Kapoor and Alia Bhatt, who got married on April 14, took four pheras and had a special pandit for the ceremony, revealed the bride’s brother Rahul Bhatt. In an interview with India Today, Rahul Bhatt shared, “Interestingly, there were not seven but four pheras at the wedding. They had a special pandit. I was instrumental in a ceremony where brothers were needed. The pandit has been with the Kapoors for many years now. So, he explained the significance of each phera. Ek hota hain dharm ke liye, ek hota hain santaan ke liye, so it was really fascinating. We have not been exposed to this. I come from a household of multiple ethnicities. So, that was fascinating. There were not 7 pheras but 4 pheras for the record. And I was during all the 4 pheras.”

Ranbir Kapoor and Alia Bhatt got married on April 14 at Vastu and it was a close-knit affair. The wedding was only attended by close friends and family members.

After getting married, Alia Bhatt shared dreamy photos from the wedding, and captioned them as “Today, surrounded by our family and friends, at home … in our favourite spot – the balcony we’ve spent the last 5 years of our relationship – we got married. With so much already behind us, we can’t wait to build more memories together … memories that are full of love, laughter, comfortable silences, movie nights, silly fights, wine delights, and Chinese bites. Thank you for all the love and light during this very momentous time in our lives. It has made this moment all the more special. Love, Ranbir and Alia.”

Alia Bhatt has also changed her Instagram display picture to one from her wedding with Ranbir Kapoor. For the wedding, the couple wore outfits designed by Sabyasachi. Alia’s ivory saree had her wedding date embroidered on it.