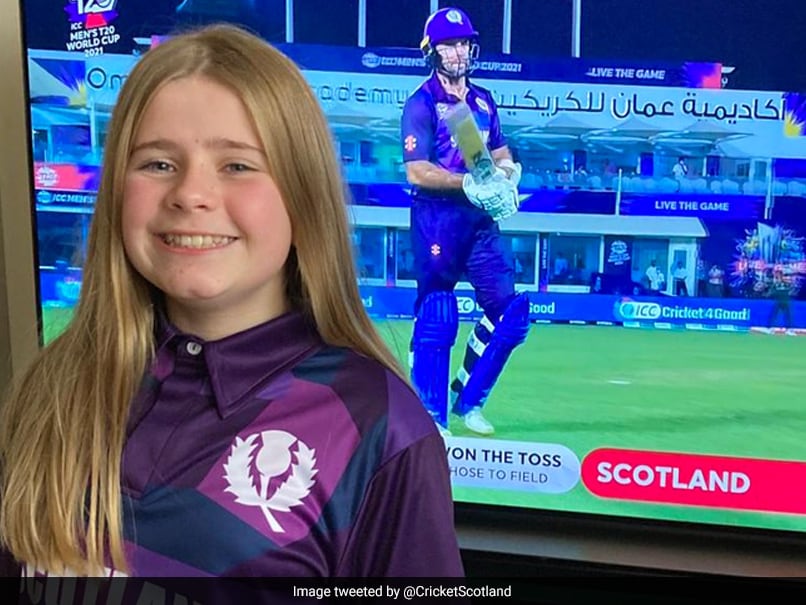 Scotland thanked a teenager who had designed their team jersey for the ongoing T20 World Cup.© Instagram

Scotland took a huge step towards qualifying for the Super 12 stage of the ongoing ICC T20 World Cup, when they beat Papua New Guinea by 17 runs to register their second win in as many matches in Group B of the round 1 matches. They had earlier beaten favourites Bangladesh in their tournament opener. Cricket Scotland took to Twitter on Tuesday to thank Rebecca Downie, a 12-year-old girl who has designed the jersey that the team is sporting at the tournament for supporting the team by watching the matches on TV. They also posted Rebecca’s photograph wearing the jersey along with the post.

“12-year-old Rebecca Downie from Haddington. She was following our first game on TV, proudly sporting the shirt she designed herself. Thank you again Rebecca!,” Cricket Scotland wrote on Twitter.

She was following our first game on TV, proudly sporting the shirt she designed herself

Kyle Coetzer’s men then produced a splendid bowling effort to skittle out PNG for 148 in 19.3 overs with Davey (4/18) emerging as the standout bowler. PNG thus made an early exit to their maiden campaign at the T20 World Cup following the second successive loss.

They had lost to Oman by 10 wickets in their tournament opener.

Chasing 166 to win, PNG needed their batters to fire but they couldn’t get any momentum and were soon reduced to 35 for 5 in 6 overs. Norman Vanua (47) and Kiplin Doriga (18) then fought back adding 53 off 29 balls to raise hopes but Watt broke the partnership dismissing the latter in the 17th over.

Davey then returned to remove Vanua to dash PNG’s slim hopes of a maiden victory in its first global appearance.