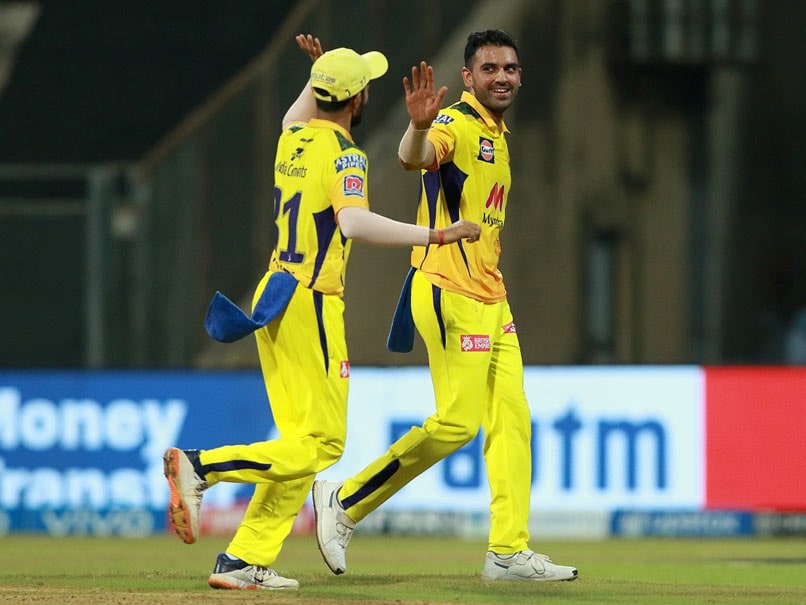 IPL 2021: Deepak Chahar returned 4 for 29 against KKR with all wickets taken in Powerplay.© BCCI/IPL


Chennai Super Kings (CSK) face unbeaten Royal Challengers Bangalore (RCB) in a top-of-the-table clash at Wankhede Stadium on Sunday. CSK defeated Kolkata Knight Riders (KKR) in their last match on Wednesday by 18 runs. The MS Dhoni-led side are currently second on the IPL 2021 Points Table with six points. They have registered three wins and a defeat. On the other hand, RCB defeated Rajasthan Royals by 10 wickets in their last outing on Thursday. Captained by Virat Kohli, RCB are top of the standings with eight points.

Here are the Chennai Super Kings players to watch out for:

In their recent win vs KKR Faf du Plessis smashed an unbeaten 95 off 60 balls, packed with nine fours and four sixes. The South African veteran is a crucial cog in MS Dhoni’s unit and he is currently their highest run-scorer this season with 164 runs in four games.

His experience will be important for CSK while batting against an opposition bowling attack consisting the likes of Kyle Jamieson and Mohammed Siraj.

The English all-rounder has been in decent form this season for CSK and he is a flexible option in their batting order. Having played in four games this season, Moeen has taken four wickets, and has also scored 133 runs. His all-round skills make him Dhoni’s trump card in tough situations.

He has been one of the most consistent CSK players with the bat this season, returning scores of 25, 26, 46 and 36 so far.

Currently fourth in the Purple Cap race, Deepak Chahar has been sensational for CSK in IPL 2021. In four games, the Indian bowler has taken eight wickets and has been Dhoni’s go-to man during the Powerplay overs.

Chahar returned 4 for 29 against KKR and reduced CSK’s opponents to 31 for 5 inside the Powerplay. A similar return will do wonders for CSK against a strong RCB batting line-up.