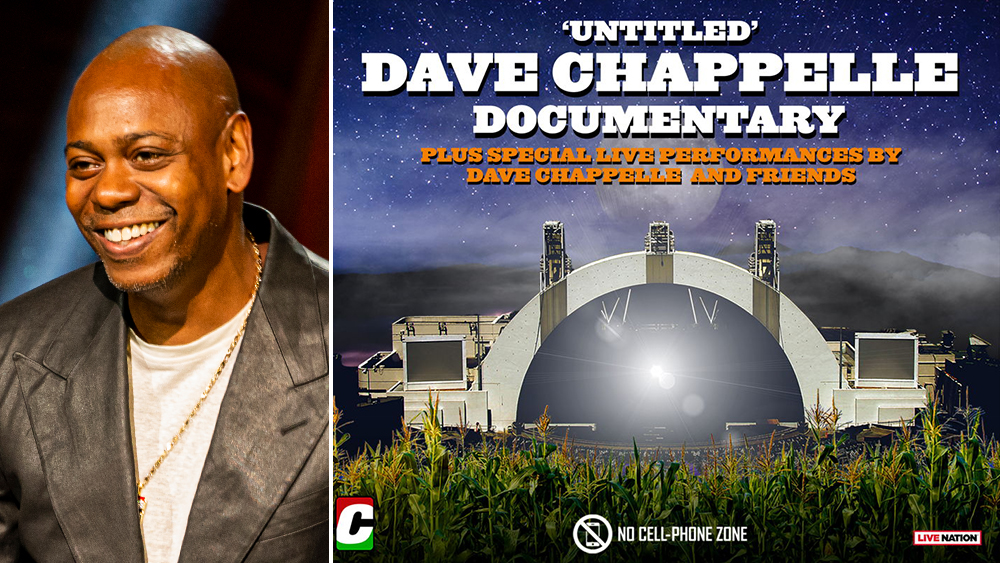 “If this is what being cancelled is about, I love it,” said Dave Chappelle tonight to a cheering and sold out Hollywood Bowl tonight after a screening of his documentary about the comic summer camp he put on last year in his Ohio hometown.

“I don’t know what to tell you, except I’m a bad mother***er,” the suited and sneakered Mark Twain Prize winner added to big laughs from the crowd.

While “cancel culture” took a bruising in a number of comments from Chappelle and others in what was a clear victory lap for the comedian on Thursday, the celebrating man himself was not in a mood to get in a brawl with anyone, critics or otherwise.

“This is the kindness conspiracy,” Chappelle told the more than 18,000 strong audience.

Taking aim at corporations and the government in a very very brief routine, the man raised by an academic activist also told his City of Angels fans that part of the street level solution to what he sees ailing America is “we have to trust one another.” Though it must be acknowledged, Chappelle did add at one point, almost as an aside, while pacing the mammoth stage: “Fuck Twitter” — which got a big roar from the social media cut off crowd.

Still, with on-stage cameos by the legendary Stevie Wonder (who told the cheering crowd that “we need to cancel hate!”), Nas, a Journey singing Jon Hamm (long story), Thunderbolt, Jeff Rose (who dropped the priceless line: “Detroit, Canada’s Tijuana”) Talib Kweli, DJ Jazzy Jeff, the iconic Snoop Dogg, Lizzo, and the poet Amir Sulaiman, the screening of the film called The Get Up in the title credits was a love-in by an standard – both on and off stage. A night where almost everyone had their phones sealed up in magnetic pouches (paid for by Chappelle), everybody danced to some of hip hop’s finest, and a ton of fireworks in the sky around the Tinseltown venue ended the night with a literal bang.

Tonight’s screening and performance comes a day after an outcry from GLAAD and other civil rights groups over Chappelle’s acrid remarks about the trans and LGBTQ+ communities in his latest Netflix special The Closer. Former Dear White People showrunner Jaclyn Moore, who transitioned during the pandemic, took to Twitter to say she was “done” with Netflix “as long as they continue to put out and profit from blatantly and dangerously transphobic content.”

The streamer itself and Chappelle’s reps have been silent, but National Black Justice Coalition’s executive director David Johns proclaimed that Netflix should be done with The Closer. “Netflix should immediately pull The Closer from its platform and directly apologize to the transgender community,” he said in a statement Wednesday.

Terming himself “Team TERF!” (the acronym for trans-exclusionary radical feminist) in reference to J.K. Rowling’s social media posts of last year about the transgender community, Chappelle spends most of the last third of his sixth — and perhaps final for a while — special on the streamer taking one swipe after another at the aforementioned communities.

Although Chappelle talks emotionally about his friendship with now-deceased transgender comedian Daphne Dorman, much of the performance is centered on “trans women” genitalia and the apparent rights one oppressed group in America has gained over another. “In our country, you can shoot and kill a [n-word], but you better not hurt a gay person’s feelings,” the comedian says, in reference to a 2018 incident involving rapper DaBaby — whom Chappelle defends at some length in the special — at a Walmart in North Carolina that saw another man shot to death.

“I am not telling another joke about you until we are both sure that we are laughing together,” Chappelle says right near the end of The Closer in a personal address to the trans and LBGTQ+ communities. “All I ask from your community – with all humility – will you please stop punching down on my people?” he adds.

In fact, the only time the controversy of the past few days was in the spotlight tonight was when Jeff Rose roasted an attendee that he looked like he was there to “protest” over “Dave’s trans jokes.” A remark that seemed to evaporate as soon as it was said in front of Chappelle fans on Thursday

Requiring proof of Covid vaccination or a recent negative test for the virus, Thursday’s screening and show in L.A. was reminiscent of the world premiere of what was then called Dave Chappelle: This Time This Place at Radio City Music Hall back in June. Closing out the Tribeca Festival, the film of Chappelle’s 2020 summer shows near his home in Ohio (full of famous friends including Chris Rock,Jon Stewart and more than a few people who were on stage at the Bowl tonight) is directed by Julia Reichert and Steven Bognar, the Oscar-winning duo who helmed American Factory for Barack and Michelle Obama’s Higher Ground productions.

As of Thursday, The Closer was still very much on Netflix. The Stan Lathan-directed special ranks No. 4 domestically in the Ted Sarandos- and Reed Hastings-run streamer’s Top 10 — that’s up a notch from Wednesday.