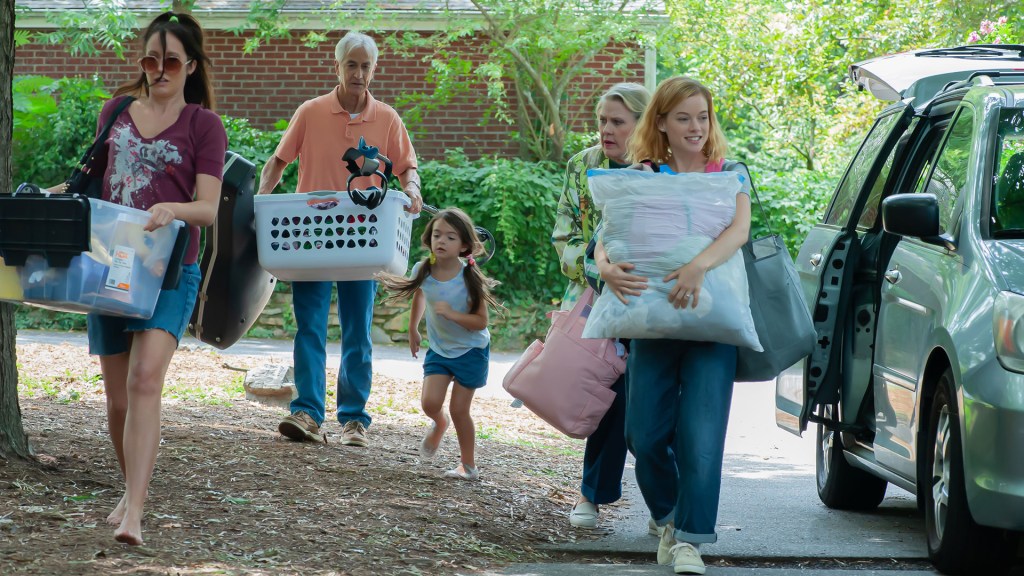 Angus MacLachlan wrote 2005’s terrific indie Junebug, which put Amy Adams on the big-time map and earned her a Supporting Actress Oscar nomination in a heartbreaking performance. It also put MacLachlan on the map with his first screenplay, and it was an auspicious start. Since then he has added directing to his credits including Goodbye to All and Abundant Acreage Available but tonight returned to the Sundance Film Festival with his latest, A Little Prayer, shot and set in his hometown of Winston-Salem, NC.

Perhaps the kind of small indie that defines the term “Sundance movie,” A Little Prayer is largely a showcase for an exceptionally talented cast who make up the troubled family in this tale. It drifts into some soapy territory before it is over but is rescued by some fine acting, even if at times it feels more like a TV production than a gritty independent film, perhaps because the cinematography looks like video more often than not.

David Strathairn plays Bill, who owns a local sheet metal business and works with his son David (Will Pullen), a war vet who returned to his home where he also lives with the family including his wife Tammy (Jane Levy). Adding support is Bill’s loving wife, Venida (Celia Weston), and a visit from the couple’s grandchild Hadley (Billie Roy) and their daughter Patti (Anna Camp), who we learn is in an unhealthy relationship with Hadley’s downbeat dad and has troubles of her own.

Although just 91 minutes, it takes awhile to get to the crux of the drama, when Bill sees David flirting with an office colleague, Narcedalia (Dascha Polanco), at the weekly employee dance party at the VFW and soon suspects that his son — who also suffers bouts of PTSD, as we also eventually discover — is having an affair on the side, even as he and Tammy have been trying without success to have a baby. Things get dicier as the secrets pile up and Tammy, without David’s knowledge that she finally is pregnant, goes to an abortion clinic. The melodrama continues when Bill takes matters into his own hands and pursues the truth, even as more revelations await.

If that all sounds like a year’s worth of plotlines for a soap opera, it is played in a slow-burning, low-key way and grounded by the always reliable Strathairn, who delivers his usual authenticity, as does the wonderful Weston, a veteran of so many of these kinds of films. Levy (Zoey’s Extraordinary Playlist) also is very fine as the wife David seems to take for granted but who bonds with Bill, particularly in a heartfelt scene where she reveals much about herself. Pullen does what he can with David, alternating between dutiful son and husband and a vet with PTSD that colors his actions. Polanco comes off well, making the most of her scenes.

It is all an earnest effort from MacLachlan but, in a tough environment for microscopic indies like this one to break out, could be a tough sell and might need a few “little prayers” of its own to find the right distributor. The cast could help. Producers are MacLachlan, Lauren Vilchik and Max A. Butler. Ramin Bahrani is an executive producer.