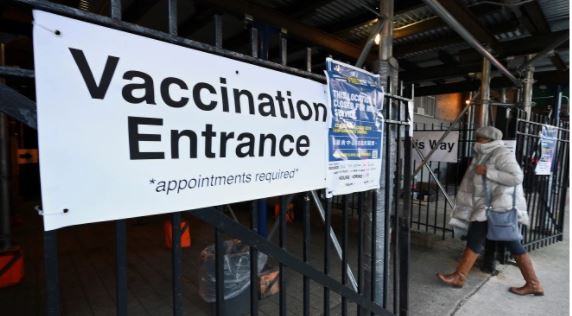 In the next few weeks, government mandated vaccination requirements will hit their deadlines, requiring a “choose it or lose it” job decision for many workers, school kids, and municipal employees.

The decision on whether to take an injection of the Moderna, Pfizer, or Johnson & Johnson vaccines has already led many film and television teams, health care workers, retail and wholesale employees and media to leave their jobs.

But things are about to reach a head, as police, firefighters and other critical positions are facing deadlines to comply in the coming weeks. A mass refusal by public safety workers could spark a crisis in many cities.

Federal contractors are required to have workers fully vaccinated by Dec. 8, 2021. However, the mandate means workers need to be fully vaccinated, which is two weeks after the vaccine dose is administered, putting the actual time line at complying on Nov. 24, 2021. Those who get a Pfizer  or Moderna vaccine need to build in time for two doses, as well as the recommended waiting period between doses.

Legal challenges to the mandates have largely failed to halt their progress. NPR reports that across the country, employers are firing workers for refusing to comply with vaccine mandates, while some are opting to quit their jobs rather than take the shot.

While the totals are still a tiny fraction of overall employees, it can add up to thousands of people in many states, NPR noted.

For Hollywood, companies ranging from WarnerMedia to CNN to Facebook and Google have mandated that employees who work from their offices be vaccinated. However, many are still offering a work-from-home option, lessening the impact.

Film and TV productions are generally leaving it up to producers. Under an agreement reached this summer, producers have “the option to implement mandatory vaccination policies for casts and crew” on a production-by-production basis.”

Potential disruptions to school operations in the Los Angeles Unifired School District has already caused its staff deadline to be pushed back. The new deadline for all workers to be fully immunized for COVID-19 is now Nov. 15. Students will be allowed a grace period this semester, but must be fully vaccinated to return to in-person schooling for the January start of the second half of the school year.