“Deeply Broken Person” But Not A Rapist – Deadline 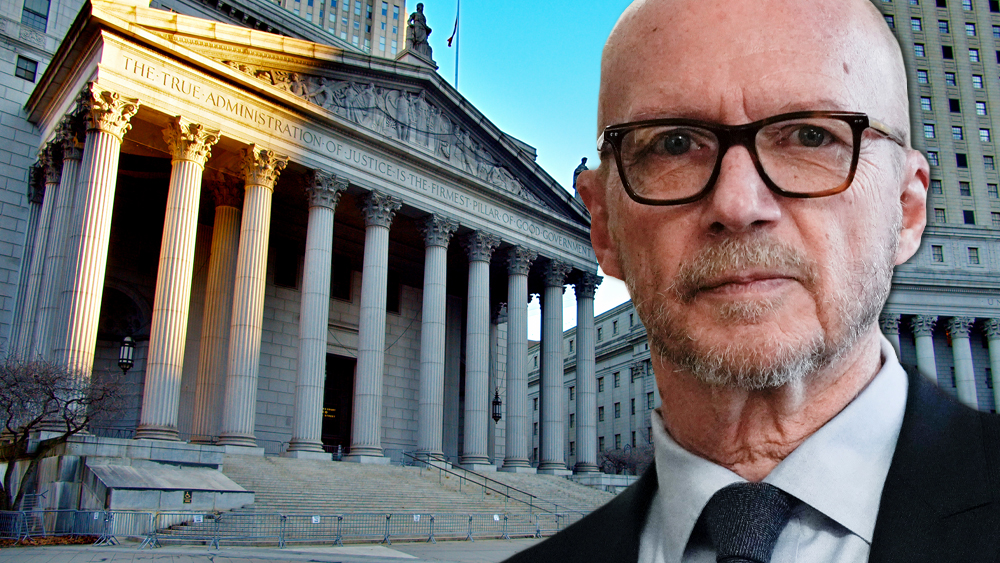 UPDATED with more testimony, 4:33 PM: Paul Haggis finished testifying Friday in his New York sexual assault civil trial, saying he is still the “deeply broken person” he called himself in a 2011 New Yorker article about his exit from the Church of Scientology, but not a rapist.

“Oh, God, no,” Haggis said when his lawyer, Priya Chaudhry, asked if being deeply broken included committing sexual assault. It was his last statement to jurors after three days on the stand disputing a claim by a New York woman, Haleigh Breest, that the Oscar-winning filmmaker behind Crash and Million Dollar Baby raped her in his Manhattan apartment in 2013. The two had been at a movie-screening after party for Side Effects where Haggis was a guest and Breest, a publicist, was working.

Haggis spent the trial’s 13th day defending the sex he had with Breest as consensual and his interactions with four other women who testified against him as misunderstood or made up. He maintained that his former church — which its reputation for secrecy and history of retaliating against vocal ex-members — is involved in Breest’s lawsuit, even as his lawyers have stipulated for the judge and the jury that there is no evidence Breest has any connection to Scientology.

A lawyer for Breest, Ilann Maazel, demanded that Haggis show proof of ties between his former church and the four Jane Does who testified that Haggis either assaulted them, or tried to, in separate incidents between 1996 and 2015. Haggis publicly quit Scientology in 2009. His replies to Maazel ranged from “I have no way of knowing” to “other than what was already stated” — a reference to one of the women having worked for a company run by Haggis’ sister, Kathy Slevin, who turned on him when he left the church. (Deadline is not identifying any accusers other than the plaintiff.)

“Did you even subpoena for the Church of Scientology for any documents?” Maazel said.

“You can’t,” Haggis said before Chaudhry stood up to object.

His lawyers have asked to put an actress and ex-Scientologist Leah Remini on the stand by live video link when the trial resumes on Monday. The former star of The Kings of Queens was a co-host of the Emmy-winning documentary series, Scientology and the Aftermath, which featured Haggis as a guest. By the end of court on Friday, it appeared that Remini was still on the witness list despite the judge voicing concerns about the length of the trial after 13 days spread across three weeks.

In a trial with starkly different accounts of the same events, Haggis said a woman who accused him of attacking her outside her apartment in Toronto in 2015 was in fact his date — though she told him she wasn’t interested in him romantically — and he dropped her off from a cab ride with a friendly wave goodbye. The woman, a freelance producer, has said she spent two days at the Toronto International Film Festival keeping Haggis at arm’s length, while also meeting him once for lunch, and cursed at him for getting into a cab that she hailed in order to get away from him.

Haggis said under cross-examination that he had offered to walk the woman home or share a cab with her. Maazel said that her address and his hotel room were in opposite directions, and that he got out of the cab at her building and sent it on its way. He then sent the woman several texts overnight and into the following morning, only one of which she answered with a busy-at-work reply.

“You didn’t know she had relabeled your name from ‘Paul Haggis’ to ‘motherf*cker?’” Maazel asked, referring to the woman’s mobile phone contacts.

On Thursday, Haggis produced a credit card bill showing a cab ride that night that he said disproved the woman’s testimony that Haggis had thrown cash at the driver and followed her out of the cab. On Friday, he agreed with Maazel that the credit card items showed no times or routes.

He admitted telling another woman at a meeting in 2008 in his office in Los Angeles that he was attracted to her, despite being married, and tried to kiss her. But he denied trying force himself on her at any point. He said —  as he did in his 2019 deposition  — that just because she turned her head to avoid that kiss didn’t mean she wasn’t interested in him. “It’s a signal she doesn’t want to be kissed right then,” he said. He said he walked her to her car, and they parted.

The woman, in a deposition played for jurors, said she went to his office to talk about a book adaptation idea and wound up fleeing the building in fear she was going to be raped. Both Canadians, the two remained in touch by email afterward and collaborated on an application for a U.S. work visa for her that appeared to contain misleading statements about a future film role for the woman, who worked in television in Toronto. Haggis said any lies in the application were hers, not his.

“You never paid [the woman] anything for this movie, did you?” Maazel said.

Haggis said he wrote her into a script, but “she never contacted me again.”

Judge Sabrina Kraus had hoped to hand the case over to jurors for deliberations today, but the trial will continue into Monday and, Kraus told jurors, probably Wednesday. “Unfortunately we didn’t make the progress we’d hoped,” she said. The court is dark on Election Day. One of three alternate jurors backing the panel of three men and three women is dropping out of the trial after today, Kraus said.

PREVIOUSLY, 12:48 PM: Paul Haggis sparred with a lawyer Friday over the meaning of a woman saying “no,” explaining again that when Haleigh Breest said “no” to him peeling off her tights she was not refusing sex.

“She did not say ‘no’ in the way that one means ‘no,’” Haggis said in a 2019 deposition played for jurors by Ilann Maazel, a lawyer for Breest, in the Oscar-winning Crash filmmaker’s New York sexual assault civil trial. Breest says Haggis raped her in his Manhattan apartment after a movie-screening party in 2013 where he was a guest and she was working as a publicist. She is suing him for unspecified damages.

A lawyer for Haggis said Friday that they want jurors to hear testimony from former the King of Queens star Leah Remini, who, like Haggis, is a former member of the Church of Scientology and a prominent critic of the organization. A lawyer for Breest, Zoe Salzman, objected, saying Remini would just duplicate testimony from other ex-Scientologists.

With jurors out of the courtroom, Priya Chaudhry, a lawyer for Haggis, called the duplication argument “laughable” given that Breest’s lawyers have enlisted four women to testify that Haggis sexually assaulted them or tried to. Chaudhry also said Remini — who won Emmys for her documentary series, Scientology and the Aftermath, which featured Haggis as a guest — might be ill with the flu.

“If we’re done today I’m not holding it up for her, because this trial needs to come to an end,” Judge Sabrina Kraus said.

The judge added that she wants closing arguments on Monday because court will be dark on Election Day Tuesday.

Haggis testified Thursday that Breest was saying no as an expression of unease with her body image. “At that point she started squirming and laughing and said, ‘No, no, I don’t want you to see me. I’m fat.’ I said, ‘You’re not fat, you’re adorable,’” Haggis told jurors when questioned by Chaudhry. He said Breest helped him remove her tights after he turned off the light in the bedroom, and they had oral sex initiated by her.

On Friday, Maazel said, “‘No’ does not always mean no to you, is that fair?” drawing an objection from Chaudhry. Maazel then played back a piece of Haggis’ 2019 deposition in which he talked about “texts and subtexts” and putting “the word in context.”

Maazel’s cross-examination, which began Thursday, offered jurors a different context: Breest suggesting they go to a bar instead of Haggis’ apartment, then agreeing to go to his place but insisting she wouldn’t spend the night, and then breaking off a string of kisses in the apartment by saying, “We shouldn’t.”

Maazel played back a piece of Haggis’ deposition in which he said that when a woman says “I’m not spending the night out of the blue like that it usually means we can have sex, but I’m not going to sleep here.”

Breest testified last month that Haggis swore at her and pinned her against a refrigerator, forced her to perform oral sex on him and submit to intercourse, and pushed his fingers inside her as she repeatedly said no. Breest has testified that she had no romantic interest in Haggis, but felt “pressured” to go home with him as a publicist working on movie screenings and afterparties in New York or a friend of Haggis who often invited him to attend.

Haggis’ lawyers have pointed to texts and emails between Breest and her friends indicating interest in seeing him again after the night she says she was raped.

Haggis has testified that the two were expressing “interest” in each other for months beforehand at events and were “playful” and “flirty” at the January 31, 2013, party and afterward at his apartment.

Haggis has testified that Breest’s protestations of “I shouldn’t” were offered in a “kitten-y” way that reminded him of the vintage female cartoon character Betty Boop. He also said that when Breest boasted of her skill at oral sex, it reminded him of an animated female character from the movie Who Framed Roger Rabbit. “The way she said it was kind of adorable,” he said. “It was almost like her Jessica Rabbit imitation.”

On Friday, Maazel posted illustrations of Betty Boop and Jessica Rabbit, cartoon characters with exaggerated female bodies and revealing clothing, for jurors to look at. Maazel asked Haggis if he was aware of Boop as “a sexist and degrading cartoon character” but was cut off by an successful objection from Chaudhry.

Erik Pedersen contributed to this report.