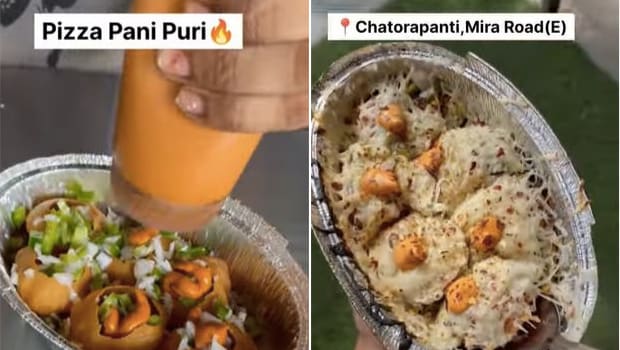 Let’s admit it – pani puri is truly one of our all-time favourite street food indulgences. Whether we know it as golgappe or puchka, patashe or any other name, the spicy delight is truly unmissable. From roadside vendors to fine dining restaurants, pani puri has found a place in our menus and our hearts! But what would your reaction be if someone experimented with the humble pani puri and made something new and creative with it? A recent viral video showed the making of an interesting pani puri with a pizza twist. The delicious yet bizarre creation is giving foodies mixed thoughts. Take a look:

The video was shared on Instagram reels by Mumbai-based blogger Nidhi Parmar. The clip has received over 4.3 million views and 105k likes since the time it was shared. The pizza pani puri was made by first adding crisp puri to a foil dish. A filling of onion and capsicum was then filled inside it, followed by a tandoori mayonnaise and a thousand island dip. Grated cheese, chilli flakes and oregano completed the dish. A blow torch was used to melt the cheese and give it a slightly smoky taste.

A number of foodies reacted to the video of pizza pani puri. Hundreds of users expressed their thoughts about the bizarre fusion dish in the comments section that got quite a mixed response. “No more experiment with panipuri please,” requested one user while another said, “Where is the pani?” Some actually found the fusion dish tempting and delicious. “Yummy,” said one user while another wrote, “It’s puri pizza!” Other foodies, however, did not like the combination, saying, “Yarr panipuri ko to baksh dete [You should’ve at least spared pani puri].”

This is not the only time pani puri has been in the news. Recently, a Vietnamese food blogger tried pani puri for the first time. His experience was shared in the form of a video that left the internet amused. Click here to read more about this story.

About Aditi AhujaAditi loves talking to and meeting like-minded foodies (especially the kind who like veg momos). Plus points if you get her bad jokes and sitcom references, or if you recommend a new place to eat at.