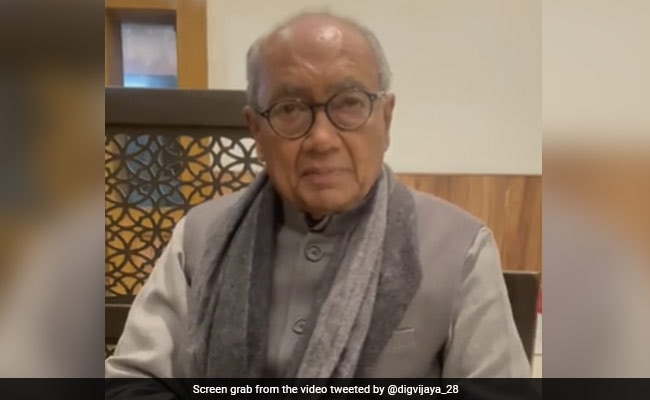 Digvijaya Singh was speaking in Jammu, where he joined Rahul Gandhi on his Bharat Jodo Yatra

Senior Congress leader Digvijaya Singh today raised questions on the 2019 Pulwama terror attack, in which more than 40 security personnel were killed and said the Centre had given no proof of the surgical strikes against Pakistan.

“Pulwama has been a hotbed of terrorism and every car is checked. A Scorpio car comes from the wrong side. Why was there no checking? Then there is a collision and 40 of our jawans are killed. To date, the government has not given information about the incident in parliament or in public,” said Digvijaya Singh.

“They talk about surgical strike – that we killed these many people. But there is no proof,” the Congress leader said.

Digvijaya Singh was speaking in Jammu, where he joined Rahul Gandhi on his Bharat Jodo Yatra.

He later tweeted a video, asking how did the terrorists get their hands on 300 kg RDX and also raised questions on the friendly relations between PM Modi and Pakistan PM Shehbaz Sharif.

India launched surgical strikes in 2016 days after 18 soldiers were killed in a terror attack on an army base camp in Uri in Jammu and Kashmir.

The February 2019 Pulwama attack on a security convoy was blamed on Pakistan-based terror group Jaish-e-Mohammad.

Days after the attack, India retaliated with aerial strikes at Balakot, deep in Pakistani territory.

The Congress has raised questions in the past about the Pulwama attack and the aerial strike. Over the years, the party has toned down its criticism, unwilling to let the BJP accuse it of “doubting our Army”.