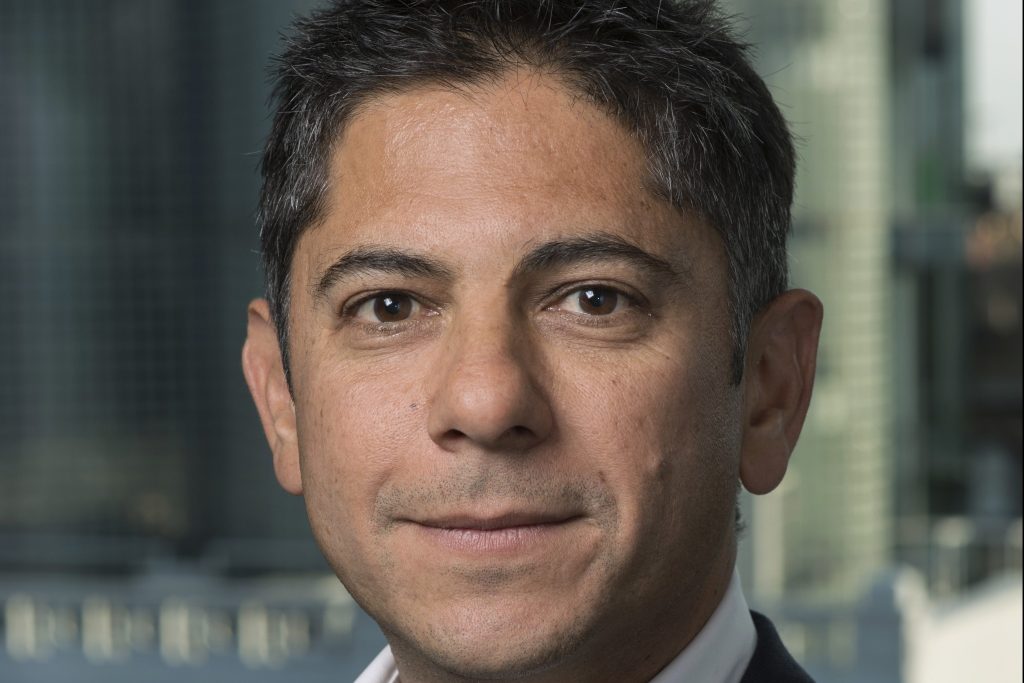 EXCLUSIVE: Diego Londono comes alive when reflecting on the success of Disney+’s Italian remake of The Ignorant Angels, one of the streamer’s first international originals that tells the story of an unexpected and moving friendship at a time of change.

While Disney+ doesn’t report viewing figures for individual shows, Londono says it is this remake of 2001 film The Ignorant Fairies above all others that has helped “change perceptions” of what a Disney show can be, bringing in a broader audience and driving the day-to-day proposition.

“This is strong local talent coming from known IP aimed at an older audience that has really resonated,” Londono explains enthusiastically, as the Executive Vice President, Media Networks and Content, EMEA, sits down for an interview with Deadline on a rainy day in early September at Disney’s West London headquarters.

The man responsible for the daunting task of guaranteeing Disney+’s EMEA content punches above its weight is all about the shows and has spent the past two-and-a-half years shepherding this perception-changing drive. However, he knows he has a lot more work to do.

Recent Digital TV Research predicted the streamer will have nearly 50 million European subscribers by the start of 2027, not far off Netflix and Prime Video’s numbers.

The low-profile Londono acknowledges the platform has inherited “amazing content from the U.S”, but he has helmed a fascinating journey, clearing the path for dozens of Disney+ originals that don’t necessarily come in the shape that traditional Disney fans would expect.

He has overseen launches in multiple countries, setting up local commissioning teams, and the result ranges from irreverent action-comedy Wedding Season to devastating French mini-series Oussekine and a soon-to-launch non-scripted format featuring David Beckham returning to his hometown to train up a young soccer team.

Londono, a self-confessed sports fanatic, was born in Columbia but grew up in L.A. and was working in a “boring job” in his early 20s when a friend urged him to apply for a job at Fox Sports, where he could marry his love for sports with entertainment.

While he didn’t get that particular job, Londono was instead recommended to Fox Latin America and, he says, “that’s where it all began.”

“I didn’t necessarily wake up as a nine-year-old thinking I wanted to be the next big exec, but really fell into all this through love of sport.”

It’s been 25 years since Londono joined Fox and rose through the ranks, starting as Fox Networks Group’s (FNG) Italy and Germany President, where he oversaw pay-TV channels, and eventually becoming Chief Operating Officer for FNG in Europe and Africa.

Soon after the 2017 Disney/Fox acquisition, EMEA President Jan Koeppen put Londono in charge of Disney+ content in the region and, from there, some serious work began, around the time a global pandemic was slowing everything down.

To Londono, forging a powerful aggregated content streamer like Disney+ has multiple parallels with what he was doing with Fox’s nascent pay-TV channels in the mid-2000s, and he constantly harks back to this era when seeking inspiration for the streaming service.

“Back then, we started recognizing there was deeper interest either from a demo, perspective, or genre that went beyond our flagship channels,” he explains, pointing to the likes of Fox Life and the now-closed Italian linear channel Fox Retro.

“Looking at content in terms of different taste-based segments, or through the eyes of different demos, is so important when you are faced with the daunting task of putting together a platform like Disney+.”

Although the platform takes advantage of powerhouse Disney brands, local content has been the priority from the start. A major priority for his acquisitions team when they head to Mipcom is the 30% EU production quota that the platform must meet in some European territories. (A management retreat is preventing Londono from attending himself, but this quota sits at the forefront of his mind, he says.)

He’s also been tasked with handling an international boost to adult-skewing vertical Star, which has swelled in priority across the last few months. Plus, he is still looking after linear channels, which he insists are “very important to the overall portfolio.”

Leveraging local commissioning talent on the ground has been a key plank of his strategy and Londono points to some local people who have been managing Fox and Disney channels for years, who “know exactly what works in their market”.

To help with the local charge, he hired popular former BBC exec and commissioner Liam Keelan in 2019 as regional head, who now oversees a team featuring the likes of scripted execs Johanna Devereaux and Lee Mason, along with non-scripted boss Sean Doyle.

There are boots on the ground in key territories such as France and Germany, countries from which the streamer is looking to greenlight between 4 and 10 shows per year as it bids to hit 60 international originals across the next two years.

The work started with a creative brief, one that focused on two areas: family content for Disney that “parents can watch with kids and ideally older kids” (Londono stresses he is “not looking for kids’ content”), and general entertainment shows for Star that “aren’t too prescriptive”.

That brief was delivered to the continent’s booming production sector and Londono has been overjoyed with the result, although he believes it has worked a little too well.

When Deadline quizzes Londono on his biggest challenge, the executive pauses briefly before chuckling. “A lot of good ideas come to us that we have to turn down,” he says. “We were always concerned that those great new general entertainment shows wouldn’t come to us and yet we’ve had so much money.

“There’s that preconception of Disney being all about family entertainment, so we had to get out there and educate, and have ended up skewing the majority of our commissions towards general entertainment.”

Londono says that it would be “too much” to describe himself as a tastemaker for Disney+’s non-U.S. offering and he instead chooses to get involved at a later stage in the process, allowing Keelan’s team to handle the pitches and development.

“I read scripts but don’t give notes,” he adds, contrasting with Amazon Founder Jeff Bezos’ eyebrow-raising admission at the Lord of the Rings: The Rings of Power premiere that he had himself been a note-giver on the most expensive show of all time.

So, what are the shows that have defined Disney+’s international efforts during Londono’s tenure?

Alongside his beloved The Ignorant Angels from original creator Ferzan Özpetek, he is excited by Wedding Season and Extraordinary out of the UK, two irreverent comedies that come from respective young writers Oliver Lyttelton and Emma Moran and feature budding stars including Rosa Salazar and Belfast’s Máiréad Tyers.

The former is described as an “action comedy romantic thriller” following a runaway pair after the main character’s fiancée’s entire family are killed at a wedding. Extraordinary is about a young, painfully self-aware woman who lives in a world where everyone has a superpower except her.

In France, Londono praises Oussekine, the mini-series featuring Succession star Hiam Abbass that tells the tragic story of the death of student Malik Oussekine and his family’s fight for justice, along with young adult sci-fi Parallels from French-Vietnamese writer Quoc Dang Tran.

Each of this quartet of shows has a unique feel, feeding into Londono’s desire to avoid being overly rigid and instead play with tone.

“We would have turned down shows like Oussekine if we had been too prescriptive and thought people only wanted crime, thrillers or romance,” he says. “You’ve got to allow stories to come from anywhere.”

The streamer is working with a range of creatives from well-known voices including Sally Wainwright and Deutschland 83 creator Jörg Winger to the likes of Lyttelton and Moran and mixing these top auteurs with younger voices is what his team set out to achieve from the beginning, says Londono.

He acknowledges it is “competitive out there” as the wave of new streamers rush to secure the best European creatives—especially during a non-English language content boom—but says Disney is still able to have its pick of the best writers and directors.

On the non-scripted front, David Beckham’s Save Our Squad leads the pack. It will show the soccer superstar in a new light, according to Londono. Meanwhile, at this year’s Edinburgh TV Festival, Doyle revealed that Disney+ had bought the highly prized doc on the “Wagatha Christie” case, a libel trial between soccer wives Rebekah Vardy and Coleen Rooney, along with a Keanu Reeves-fronted series about the Brawn Formula 1 team.

Taken together, the scripted and non-scripted offering packs a punch and, as Disney+ plans more territory rollouts later this year, Londono is galvanized by the original’s opportunity to expand in emerging territories such as Poland and Turkey.

The past months have been tricky to navigate for the streamers thanks to Netflix’s well-publicized subscriber losses dominating headlines and an impending cost-of-living crisis fast approaching, which could impact people’s appetite to subscribe to content.

Meanwhile, the likes of Paramount+ and SkyShowtime are swiftly rolling out to more territories, while HBO Max is soon to combine with Discovery+ for a mega offering.

Londono rejects any notion that he will be steering a “change of direction”, however, citing Bob Chapek’s recent earnings call declaration that Disney+ will maintain a “business as usual” face in the ever-shifting current climate.

He is instead laser-focused on widening the perception of what Disney can offer its subscribers and says this involves always keeping half an eye on the competition.

HBO’s House of the Dragon has already been binged along with Amazon’s Lord of the Rings spin-off, and Londono says he also enjoyed the latter’s All or Nothing: Arsenal doc series (his kids go to the same school as Arsenal manager Mikel Arteta’s).

“We’d be irresponsible not to be monitoring the competition,” he adds. “But it’s one thing to monitor and another thing to let them drive your day-to-day decision-making. We set out a strategy, which we can adjust when necessary, and feel pretty confident in terms of what we set out as our plan.”

Looking to the near future, Londono wants to keep unearthing more shows like The Ignorant Angels, commissioning that strong, resonating IP that shifts the dial in terms of audience expectation of the Mouse House.

“It takes time for a perception change to happen,” he adds, mulling what’s in store for the streamer over the coming years.

“I want to ensure that we keep driving this change so that when people sit down and ask themselves, ‘What am I going to watch tonight?,’ they know Disney+ has more to offer than they would expect.”

This article features in Deadline’s first ever Mipcom print edition, which will be available next week in Cannes.