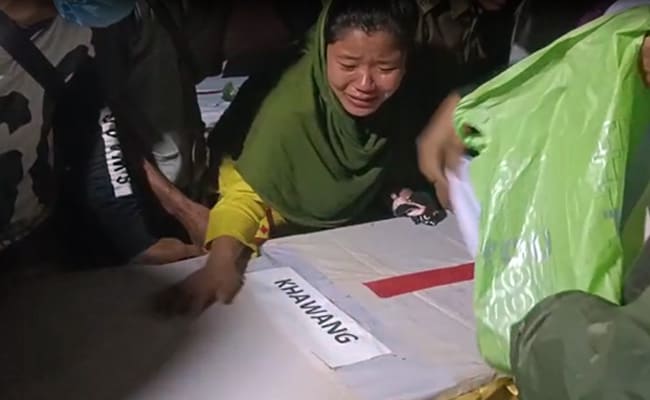 Nagaland Killings: 12 killed in the Army op and in retaliatory violence were buried last night

Three days after 14 civilians were killed in a horrifically botched op by the Army’s elite 21 Para Special Forces, gut-wrenching visuals have emerged of grief-stricken families burying their loved ones in a mass grave.

All 12 were from Oting village in Nagaland’s Mon district, and they were buried in a mass grave.

Distressing visuals showed one woman weeping uncontrollably over a coffin.

One of the other videos zooms out to show multiple coffins, each surrounded by men and woman crying and holding garlands while family members hold and comfort them.

Yet another shows a young woman, in black, crying desperately as she clings to two coffins.

One particularly horrible visual shows a line of nondescript coffins, some of which are covered in a white cloth with a red cross and the others with plain sheet. 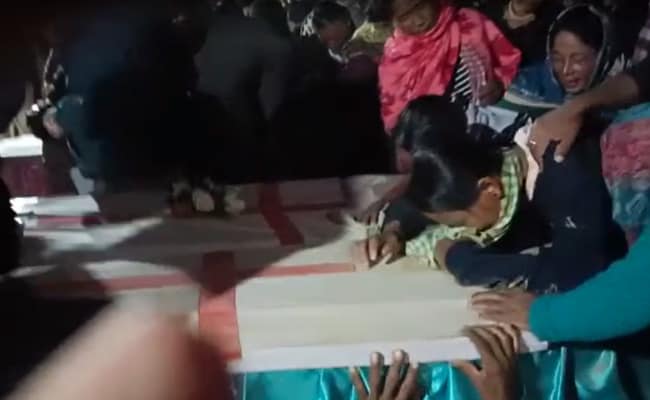 Among the tragic stories to have emerged are that of a man who leaves behind his wife and a two-month-old child. A father stricken with cancer had two sons – now one is dead and the other is battling for his life in hospital. The mother of one of the villagers killed has suffered severe mental trauma.

Another of the visuals shows an armed security personnel standing by one of the coffins. 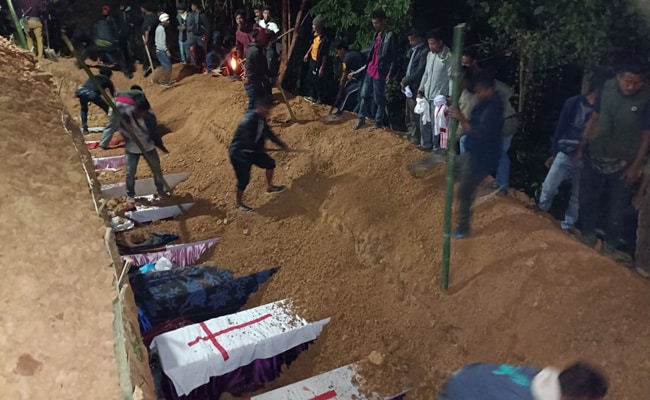 Emotional visual of 12 coffins being buried

On Saturday eight villagers from Nagaland’s Mon district were killed in an ambush set up by the Army’s 21 Para SF. The Army later said the ambush was set after a tip about insurgents’ movement.

Five more people were killed after other villagers heard the gunshots and – according to a preliminary report by Nagaland Police – found the Army team, led by a Major, trying to cover-up the incident.

However, Army sources told NDTV yesterday the soldiers were trying to take the bodies to the police station; there was never any intention to hide what had happened, they said.

Sources also said the angry villagers, some armed with machetes, had attacked the soldiers and forced them to fire in self-defence. One soldier died in the violence; his throat was slashed.

With tensions running high, the following day there was more violence – this time in Mon town – where Assam Rifles’ camp was attacked. Troops had to fire in self-defence again, the Army said.

One more civilian was killed.

Across the two days, nearly a dozen other civilians and several soldiers were injured.

Nagaland Police’s FIR named the Army’s elite special unit and alleged “murder”, saying that the “intention” of the security forces was to “murder and injure civilians”.

The Army expressed deep regret for the “unfortunate loss of lives” and has confirmed that the matter is being investigated internally. Yesterday Army sources also defended the initial firing by saying the unit thought they saw a hunting rifle in the truck. But no arms or ammunition were recovered from the truck.

The ‘classified’ op was planned and executed without the knowledge of the police or Assam Rifles, the para-military force which has a key role in handling insurgency in the area.

The Mon area is the bastion of Naga group NSCN(K) and Assam’s ULFA (United Liberation Front of Asom). Known to be a sensitive and volatile area, the district shares an international border with Myanmar and a state border with Assam.

Union Home Minister Amit Shah made a perfunctory statement in Parliament yesterday, but did not clarify if the soldiers involved are to be protected from prosecution under the controversial AFSPA.

Nagaland Chief Minister Neiphiu Rio, whose NDPP is an ally of the BJP, and his Meghalaya counterpart, Conrad Sangma, have led the calls for AFSPA to be scrapped; the demand was raised by opposition MPs in Parliament yesterday, with some walking out in protest.

Previous articleWatch: Saransh Goila Shares This Famous Recipe From Gujarat, A Must Try In Winters
Next articleReserve Bank Of India May Refrain From Reverse Repo Hike On Omicron Worry
LocalTakSabse Tez