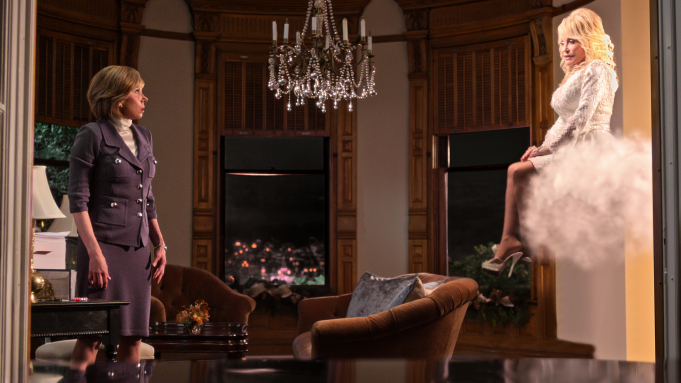 Holiday movies are great business, consistently bringing in female audiences and delivering big ratings to establish themselves one of the most lucrative programming genres. But along with their success, the holiday movies also have carried stigma over formulaic plots and characters and are not typically considered awards material.

Netflix’s Dolly Parton’s Christmas on the Square broke through that stigma to win the Emmy for Outstanding Television Movie at the Creative Arts ceremony today.

Netflix pulled out the stops for Christmas on the Square, creating a winter wonderland at the Grove in August to promote the movie, which was also nominated — and won — for choreography. It worked as Christmas on the Square became only the second holiday movie after the 1977 The Gathering, starring Ed Asner and Maureen Stapleton, to win the Emmy for Outstanding TV Movie.

“This is such an icing on a cake that we baked so well and tastes so good already,” Christmas On the Square director, executive producer and choreographer Debbie Allen, a double Emmy winner tonight, said backstage. “It feels good to know that I’m for sure still in the game. It means a lot of things because I came into this industry dancing.”

Christmas On the Square tells the musical story of Regina Fuller (Christine Baranski) as she returns to her hometown to evict the residents and sell the land to a mall developer. In response, the town comes together as a community, while Angel (Dolly Parton) and her co-angel Felicity (Jeanine Mason) work on inspiring kindness in Regina.

During Deadline’s Contenders Television: The Nominees event, Christmas On the Square executive producer, star and composer Parton, who was not at the Emmy ceremony, called the movie “a perfect little storm.”

“Who knew that when we were creating this movie, that it would be aired in the middle of the pandemic, and it would bring so much joy and so much hope to millions of people around the world?,” she said. “I think that was one of greatest gifts that we gave and didn’t even know quite when we were doing it that we were going to help uplift the world.”