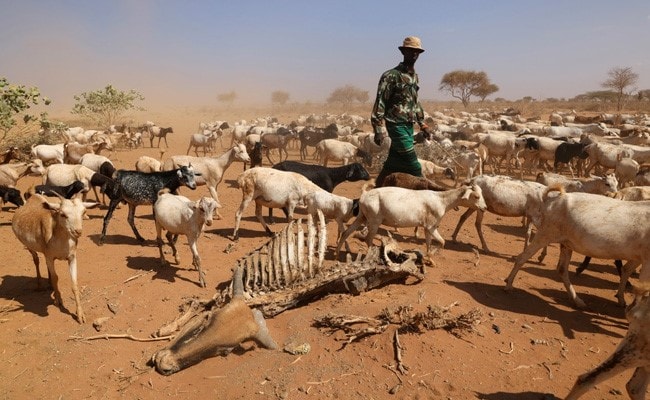 In northern Kenya, the ribs of dead sheep stretch towards the blazing sun as parched herders trudge past, a day’s march from water. The value of their skinny goats is falling as fast as the prices scrawled on the sacks in the market are shooting up.

More than 465,000 children under five and over 93,000 pregnant and breastfeeding women are malnourished in Kenya’s northern region, the U.N. says.

Food prices are climbing. In Marsabit County, they are 16% above average, data from the National Drought Management Authority (NDMA) shows.

“Goats are unsellable, cows are even worse to sell and our children are starving,” Moses Loloju, a herder from Isiolo county who volunteered to help distribute food donations from the county government.

This is the second consecutive season the rains have failed in northern Kenya, a semi-arid part of the country, unlike the more fertile and greener south.

The lack of rain means 2.4 million people in the region will struggle to find enough to eat by November, the United Nations World Food Programme says.

“The past droughts were largely predictable. We had longer cycles of 5 to 10 years (between them). And this meant that the pasture and water bodies would regenerate very quickly,” said Maurice Onyango, the Regional Head for Disaster risk Management for charity Plan International.

“(Now), we are seeing droughts coming every two years, sometimes every year.”

Temperatures in northern Kenya have climbed by 0.34°C per decade from 1985-2015, based on data from the U.S. government.

They are expected to climb further, with heat waves in the coming five decades likely to increase in length by between nine and 30 days, the U.S. government data says, making it harder to grow crops or keep livestock as more water evaporates.

Much of northern Kenya is forecast to be sunny and receive below-average rainfall this month, Kenya Meteorological Department says. Climate change is expected to increase the frequency and severity of droughts in the region.

In much of the north, this year’s long rains provided about 25-50% of normal rainfall, the NDMA, a Kenyan government agency, said.

“The few remaining animals have nothing to graze, they can’t reach water points since they have grown weak,” Bargeri, a herder who goes by only one name, told Reuters.

Even the donkey he used to fetch water perished. So he now walks to get water, clutching a jerrican in each hand. Some herders in his home of Marsabit County reported walking 40 kilometres in search of water, an NDMA report showed.

For the pastoralists of northern Kenya, savings are held in livestock. A drought can wipe out a life’s work.

No title defense for Djokovic in Australia; faces deportation after losing appeal

No title defense for Djokovic in Australia; faces deportation after losing appeal