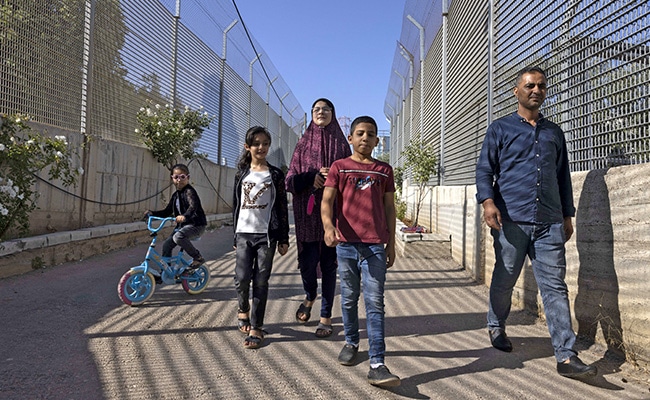 For years the family home stood amid swathes of farmland, but now it lies behind a yellow gate

An eight-metre high metal fence surrounds the Gharib family home in the occupied West Bank. To reach it they must pass through a gate remotely controlled by Israeli security forces.

Since Israel seized the territory in the Six-Day War of 1967, a Jewish settlement has sprung up on surrounding land claimed by the family leaving them isolated in their single-storey house on the edge of the Palestinian village of Beit Ijza.

“I don’t know when this will end,” sighed Sa’adat Gharib. “No one knows the pain my children are suffering.”

For years the family home stood amid swathes of farmland, but now it lies behind a yellow gate, controlled by Israeli soldiers, who also patrol a narrow bridge overlooking the eight-metre (26-foot) fence.

“During these years we’ve had a tough life,” said Gharib, 40, who works for the Palestinian Authority in nearby Ramallah.

When he was a child, the Jewish settlement of Givon Hahadasha was built partially on land he says belonged to his family.

Decades on, the high fence separates the Gharib house from the Israelis’ red-roofed homes and gardens. A communal space for the settlers, with a children’s slide, has been placed a few metres (yards) away.

Settlements are deemed illegal by most of the international community, a judgement Israel rejects.

The Gharib family has fought numerous legal battles in Israeli courts, in 2012 winning the right to a small strip of the land they claim.

“The settlers built a parking lot and a park, and we’ve needed the security forces to implement (the decision) and retrieve it for 10 years,” said Gharib.

The yellow gate leading to the house was installed back in 2008, Gharib said, and at one point the family had to hold up their IDs to security cameras to cross the threshold.

“(We) appealed to the high court… and the court permitted us to have the gate open all the time,” Gharib said.

“Disputes have broken out between us and the settlers,” said Gharib, who lives with his wife and four children, as well as his mother.

Avi Zipory, a resident of the settlement, said he would prefer it if the “unpleasant” fence around the house was not there.

“Two courts unanimously decided that the area and his house are within Jewish land,” said the 70-year-old.

“We didn’t want to destroy his house… (he is) not ready to accept any alternative plan, (even) other land and a lot of money, that’s why we had to continue this separation fence,” he said.

Gharib has hung blue tarpaulins to create a screen between his home and the Givon Hahadasha settlement. “So that the kids can play without being bothered by the settlers and fearing them,” he explained.

Gharib said the situation has affected his children, particularly when there are clashes between Palestinians and Israeli forces nearby.

“My daughter couldn’t sleep all night, for five hours, and she was afraid of the security forces that were stationed at the door of the house,” said Gharib, recalling one incident.

Despite the difficulties, he still strives to harvest the family’s olive trees.

To do so, he said he has to coordinate with the Israeli security forces and take a circuitous route through the neighbouring Palestinian village of Bayt Duqu. Once there, Gharib said he must wait “an hour or two” for soldiers to open another gate.

Gharib remains determined to stay on his land: “This is our land which my father inherited from my grandfather. We will not sell it to anyone for all the money in the world.”