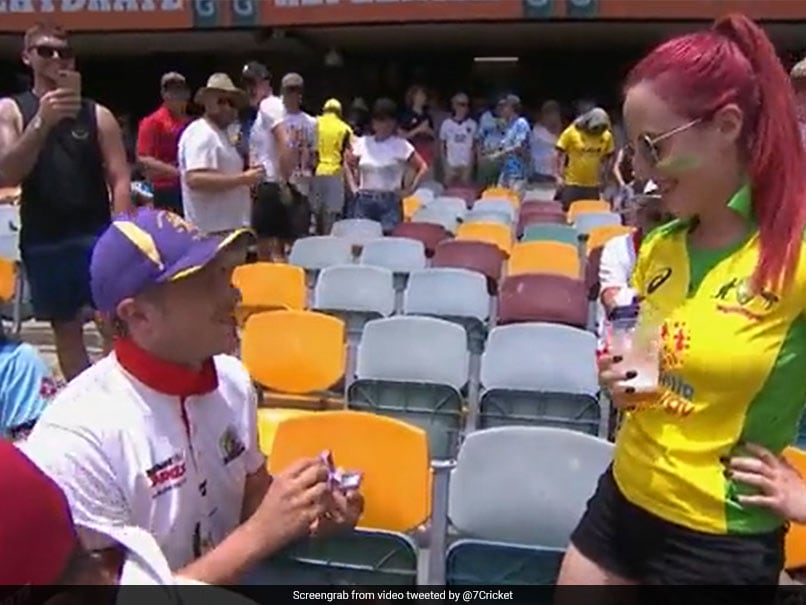 An England cricket team fan, Rob, on Friday popped the question to his Australian girlfriend, Nat, in front of a packed crowd during the ongoing first Ashes Test in Brisbane. Rob proposed to his Australian girlfriend Nat during the morning session on day three of the ongoing first Test at the Gabba. Rob, who had first seen Nat during the 2017-18 Ashes in Australia, distracted his girlfriend by pointing at themselves on the big screen before pulling the ring out and getting down on a knee.

“I’m going to keep this short and sweet,” Rob said to a surprised Nat.

“It’s been four years. Will you marry me?”

Nat nodded before the couple sealed the deal with a kiss as the England fans around them erupted into cheers inside the stadium.

She said yes! How good! pic.twitter.com/Mc7erNaeYO

“It wasn’t expected at all. I’m still so shocked,” Nat told 7 Cricket at the Gabba on Friday.

On being asked to recall their first interaction, Rob said: “I met her at the cricket (game). We met at the Melbourne Cricket Ground (MCG) four years ago.”

With the arch-rivals battling it out on the field, Rob’s proposal to Nat certainly brought some smiles on the faces of both sets of fans.

As far as the match is concerned, Australia are currently in the driving seat having taken a massive 278-run first innings lead.

After bowling out England for 147 in the first innings, the hosts went on to post a total of 425 on the back of Travis Head’s maiden Ashes ton (152).

In the second innings, England are currently two wickets down, still trailing Australia by more than runs. Dawid Malan and Joe Root have steadied their ship with unbeaten half-centuries.

The visitors had lost both the openers, Haseeb Hameed and Rory Burns, during the second session on Day three.