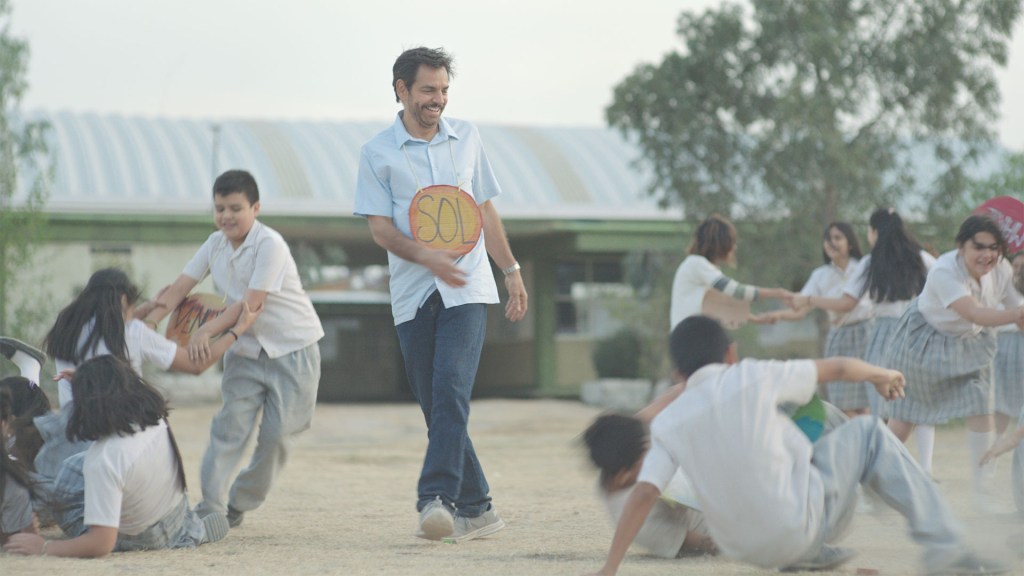 The last time Mexican superstar Eugenio Derbez had a film at Sundance in 2021. The movie was CODA, and it not only swept all the top prizes at the fest that year, it went on to win three Oscars including Best Picture. He had a supporting role in that film as an inspirational high school music teacher, and now in Radical, which just had its world premiere at Sundance on opening night at the Eccles Theatre, he essays another inspirational teacher. This time it’s a true story and one in which he plays the lead role of Sergio Juarez.

Juarez (full name Sergio Juarez Correa) was the subject of a Wired magazine article by Josh Davis that detailed his rather incredible story as an unorthodox teacher in a poor Mexican border town called Matamoros. It is a forgotten poor city with little hope for its kids, particularly in the elementary school, where he uses a teaching method he stumbled upon seeing a TED Talks video in which the students lead the curriculum in learning what they want to learn, not what officials dictate through testing and other methods. Derbez takes on the role and dials down the comic persona for which he is so widely beloved now, not just in Mexico but the world over. As in CODA, he sheds any indication of that and demonstrates a strong dramatic talent that brings this man and his story to vivid life.

Yes, we have seen dozens of inspiring-teacher movies in the past — all the way from Goodbye Mr. Chips and To Sir, with Love to Conrack, The Marva Collins Story, Stand and Deliver, Dead Poets Society, Lean on Me and countless others. However this small, virtually unknown tale of a man determined to unlock the human potential of kids who likely never will beat the circumstances of their birthplace is unique and special with its setting, Using improvisational techniques and a low-key, gritty visual style in which the viewer is treated almost as another student in the class, writer-director Christopher Zalla returns to Sundance in triumph 16 years after winning the Grand Prize here for his first film, 2007’s Padre Nuestro, which also featured Derbez.

After establishing the To Sir, with Love nature of this school, and the kids in the sixth-grade class, we meet Sergio. He has turned over all the desks in his classroom and welcomes the incredulous stares of his new students as he tries to convince them to come aboard these “lifeboats” in the make-believe ocean for the kind of off-the-wall lesson they have never encountered before. Soon we see there is method to his madness, but he must fight off other teachers, his principal and eventually the district head who question the wisdom of what he is doing. Along the way the focus is on a number of the kids, mostly newcomers to acting, who all get their moment in the sun — particularly his major find, Paloma (a splendid Jennifer Trejo), who, despite the dirt-poor living conditions she endures and the migrant father who barely gets by, shows remarkable aptitude under Sergio’s tutelage as a rocket scientist in the making. She is also based on a real person, and that story is even more incredible. There are others such as lovestruck Nico, Lupe (a fine Mia Fernanda Solis) and more who are also challenged by the dark world of cartels and bullies surrounding them but still thrive in the light of Sergio’s belief.

The Spanish-language film doesn’t sugarcoat his story or the hardships along the way, even a nervous breakdown when Sergio is suspended for refusing to teach the “test” required for the school’s students. You can almost smell the dirt of this dead-end corner of the world, the promise of America just across the ocean, but even more importantly the promises of inspiring teachers like Sergio helping to lift them out and into a better life. Derbez never has been better than in this film, one that’s for sale and, if there is any justice, will be picked up immediately by a distributor looking for a feel-good true story with real potential to make a difference.

Derbez produces through his 3Pas Studios along with co-founder Ben Odell, and Davis. Film Sales Corp is the sales agent.