Even At 80, Amitabh Bachchan’s Social Media Game Is On Point 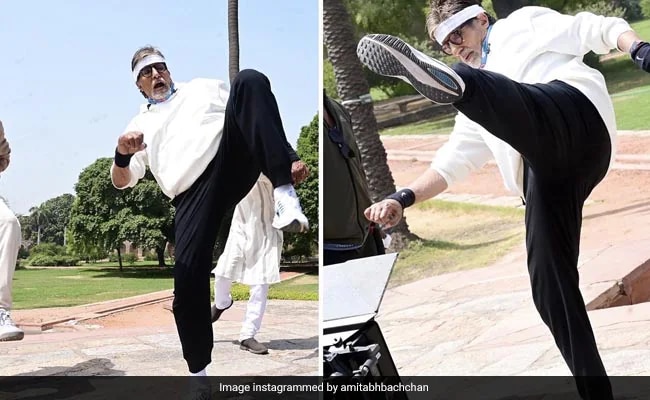 Amitabh Bachchan’s social media game is better than yours. Big B, at 80, is one of the most active celebrities on the Internet. His posts can even give Gen Z a run for their money, and it is no surprise that fans need updates about anything to do with the legend. Amitabh Bachchan is famous for numbering his posts on Twitter. His Instagram timeline, too, is a fun place. From putting up pictures of his quirky collection of shoes to now-and-then moments, Amitabh Bachchan always has a post ready. Fans across the nation are celebrating the megastar’s birthday today. So we thought it would be a perfect occasion to go through some of the best social media posts by Amitabh Bachchan. Are you ready? Read on.

Amitabh Bachchan decided to perform some kicks like Tiger Shroff. Reason: Instagram likes. The megastar, in the caption, said, “Seeing Tiger Shroff getting all those “like” numbers through his flexible kick abilities, I thought I would also give it a try, in the hope of getting even a small percentage of ‘likes.”

Amitabh Bachchan, back in 2018, came up with a complaint that his count of Twitter followers was not going up despite “maximum activity”. He wrote a post which read, “Dear Twitter management, it’s quite amazing how you manage to keep the numbers of followers constant and not moving at all despite the maximum activity. Well done. I mean how do you keep the scoreboard from not moving despite every ball being hit for a  six.”

T 2793 – Dear Twitter Management , its quite amazing how you manage to keep numbers of followers CONSTANT, & not moving AT ALL despite maximum activity !!????????????????????.. well done !! I mean how do you keep the score board from not moving despite every ball being hit for a 6 !! pic.twitter.com/oDZU9xxYAZ

Amitabh Bachchan’s struggle with emojis is oh-so-relatable. The actor shared a picture in which he is seen making a frame with his hand. Here comes the question. Pointing at the raising both hands emoji, he wrote, “A question: does this emoji depict film framing as in my Insta pic .. Pr prayers, hailing, excitement … or what? I thought it was a film frame .. like good enough to be framed on film.”

5. Big B’s Shout Out To The Beatles

Amitabh Bachchan shared a collage of his pictures just to give a shout out to The Beatles. Here, the actor is wearing a light yellow hoodie and white trousers. The caption includes lines from the iconic song Yellow Submarine, which was part of The Beatles’ 1966 album Revolver.

Amid the boycott trend in Bollywood, Amitabh Bachchan dropped a cryptic note, earlier this year, to express his state of mind. It read, “Kuch batein karne ka mann karta hai, par karein toh kaise karein, har baat toh aajkal baat ban jati hai (I feel like speaking about some things, but how to do it, as everything becomes an issue these days).”

“Salwaar, banyan aur hoodie…fashion ki toh —,” this is what Amitabh Bachchan had to say about his oh-so-cool and casual look. Isn’t his caption game too good?