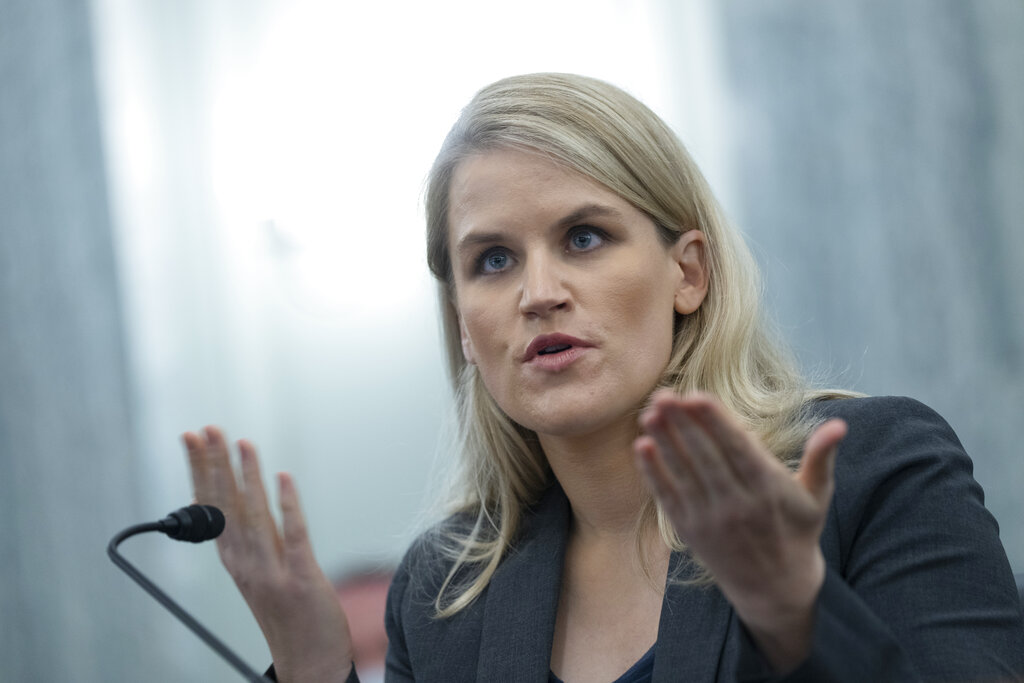 UPDATED, 1:24 PM PT: Whistleblower Frances Haugen said breaking up Facebook – a solution lawsuits, lawmakers and regulators have rallied around — wouldn’t lessen the risks its platforms pose. That could be the sole — sort of – positive for Facebook in otherwise searing testimony by the former executive who described a company “stuck in a feedback loop it cannot get out of.”

“I’m actually against the breaking up of Facebook because you see the problems repeat themselves,” she said in response to a question. The problems are algorithms and AI, she said, which wouldn’t change even if the platforms split. If they did, she suggested, “most dollars will go to Instagram” and Facebook “will continue to be this Frankenstein that is altering, that is endangering lives around the world, only there won’t be money to fund it.

She said that for body dysmorphic disorder (which can cause anorexia, anxiety, depression and worse, especially in young girls, and was a big part of Tuesday’s discussion), Instagram is “distinctly worse” than TikTok or Snapchat. “Instagram is about bodies and comparing lifestyles,” Haugen said.

The broader point, she emphasized multiple times, is that Facebook creates “false choices”– hate speech vs free speech, accepting one if you want the other on the platform, but that its algorithms can absolutely be tweaked or more human curation added for it to be less damaging than it is now.

“This research, and the documents containing that research, is not only findings and conclusions, but also recommendations for changes,” she said of the data she took before leaving the company. “But, again and again, those recommendations were disregarded,” she said. Apparent evidence of that is why a series of WSJ stories last month presenting the data created the uproar it did.

Even if “0.1% of sessions, 1% of views” were impacted by a tweak, she said, Facebook “chose profits over safety.”

One takeaway for lawmakers as they hung on her words seemed to be the need for more whistleblowers to come forward. “Your being here really sends a profound message to our nation that one person can really make a difference. One person standing up and speaking out,” said Sen. Blumenthal. “You have raised awareness in a way that is very unique. I think there are other whistleblowers, and in the tech world you are showing them that there is a way to make this industry more responsible.”

In a statement delivered in the middle of Haugen’s testimony, Pietsch said the whistleblower was “a former product manager at Facebook who worked for the company for less than two years, had no direct reports, never attended a decision-point meeting with C-level executives — and testified more than six times to not working on the subject matter in question. We don’t agree with her characterization of the many issues she testified about.”

Pietsch said that the company agreed that “it’s time to create standard rules for the internet. It’s been 25 years since the rules for the internet have been updated, and instead of expecting the industry to make societal decisions that belong to legislators, it is time for Congress to act.”

Haugen, however, urged lawmakers to take aggressive action to rein in the company. Facebook has been running ads advocating for updating the laws, but critics see that as a way to try to get ahead of more stringent regulations and attempts to peer inside what lawmakers today called an impenetrable “black box.”

Some like Sen. Amy Klobuchar (D-MN), complained that the tech lobby was waiting in the wings as they propose legislation. She told Haugen, “You have said privacy legislation is not enough. I completely agree with you. We have not done anything to update our privacy laws in this country, our federal privacy laws. Nothing, zilch, in any major way. Why? Because there are lobbyists around every single corner of this building that have been hired by the tech industry.” She said that Facebook and the tech companies “are throwing a bunch of money around this town and people are listening to them.”

“I think the time has come for action, and you are the catalyst for that action,” Klobuchar told Haugen.

UPDATED, 8:14 AM PT: Frances Haugen, the Facebook whistleblower, told lawmakers that the company was “putting profits over our safety,” reiterating that the company was aware of the potential harm its platform poses to children and it public discourse yet chose not to take meaningful action.

While that message mirrored what she told 60 Minutes on Sunday, Haugen also outlined steps that she believes Congress should take the rein in the company.

Haugen said that lawmakers should explore changing Section 230, the passage of a 1996 law that exempts platforms from liability for third-party content, to exempt decisions that are made about algorithms. She also suggested a regulatory body that would have oversight over tech platforms.

She also countered Facebook’s own claims, in a flood of video and online ads, that profess to support changing Section 230 and privacy laws. But Haugen said that the company’s proposals will “not get to the core of the issue.” She instead called on lawmakers to “break out of their regulatory frames” and said that “until the incentives change, Facebook will not change.”

She also said that the company was less transparent that other platforms, accusing Facebook of hiding its data so that users can not discern how it personalizes its feeds.

“A company with such frightening influence over so many people needs real oversight,” she said.

The official purpose of the hearing was to focus on Facebook’s impact on kids online, triggered by a Wall Street Journal expose showing that the company had research on the addictive nature of its platform and the impact that Instagram had on teen girls and negative body images.

But Haugen repeatedly focused on how the platform also impacted political discourse, with the algorithm favoring user engagement, or content likely to generated feelings of anger and outrage. Although Facebook uses artificial intelligence to try to root out incendiary content, she said that the company’s “own research says they cannot adequately identify dangerous content.”

“They cannot protect us from the harms that they know are in their own systems,” she said.

While much of the focus has been on Facebook’s impact on political discourse in the U.S., Haugen linked the platform to unrest in other counties, including Ethiopia, where there have been complaints about hate speech on the platform amid ethnic violence.

PREVIOUSLY: Sen. Richard Blumenthal (D-CT) said Tuesday the world’s largest social media company is facing a “big tobacco, jaw dropping moment of truth” as a massive cache of internal whistleblower documents show Facebook put profits ahead of the safety of children, when it knew it was causing harm.

He introduced a Senate Commerce subcommittee hearing focused on testimony by former Facebook executive Frances Haugen by thanking her for “standing up to one of the most powerful, implacable corporations in the world.” CNN carried the hearing from the start, with Fox News also joining and MSNBC providing coverage.

“But you are not here alone. You are armed with document and evidence that speak volumes about how Facebook puts profits in front of people,” he said.

Facebook was the target of a series of scathing investigative reports last month in the Wall Street Journal, based on documents supplied by Haugen. They created an outcry by seeming to show that Facebook platforms harms teens in various ways and knows it. It prompted a hearing on the Hill last week with Facebooks’ Director, Global Head of Safety, Antigone Davis.

CEO Mark Zuckerberg has been mostly publicly silent in recent days and lawmakers berated him for going “sailing” as avalanche of documents hit and, in a weird coincidence, FB’s social media platforms went down yesterday for an unprecedented six hours.

Sen. Blumenthal said that had Davis insisted then that the research unveiled in the documents “‘is not a bombshell.’ This research is the very definition of a bombshell. Facebook is facing a big tobacco moment. I helped lead the big tobacco xx I remember when we found those files that they had done research [showing tobacco is harmful] and concealed it.” Blumenthal — head of Subcommittee on Consumer Protection, Product Safety, and Data Security — was a leader in exposing the harms of big tobacco.

“Facebook knows its products can be toxic to children … but they valued their profit more than the pain they cause children,” he said.

He said the SEC and the FTC should also investigate if Facebook had misled investors.