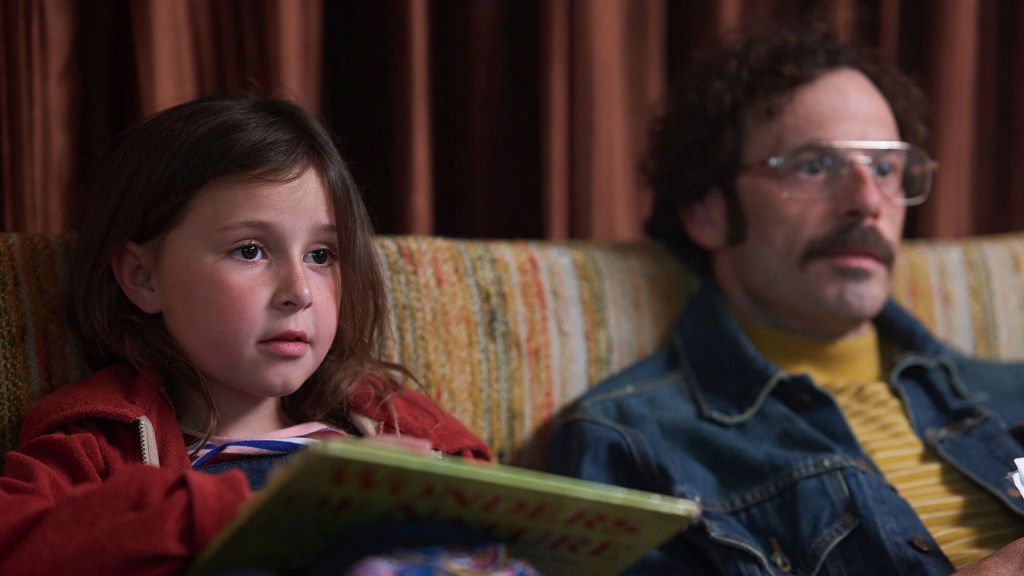 Emilia Jones earned a lot of attention as the star of 2021’s big Sundance winner and eventual Oscar winning Best Picture winner CODA, and the praise should be continuing this year as she not only stars in Cat People , but also Fairyland which had its World Premiere in Park City today.

Sofia Coppola serves as lead producer for this American Zoetrope production of Andrew Durham’s feature film writing and directing debut, and it is a memorable one that is unlikely to leave a dry eye in the house. It had me in quiet tears by the end of this film adaptation of Alysia Abbott’s moving 2013 memoir of growing up in San Francisco with her widowed father just as gay pride was taking hold and the AIDs epidemic was on the horizon. This is a not a sweeping panorama of what happened there in the 70’s and 80’s, but rather a personal coming of age story of the unconventional relationship between a gay single father and the daughter he must bring up alone after the tragic death of his wife.

Though this is set at that time and in those circumstances, it is at its very big heart a universal story of family, love, staying true to who you are, and being there for each other when it counts the most.

The book and film are the account of Alysia whose mother was killed in a car accident in the early 70’s and then moved with her father Steve (Scoot McNairy) to San Francisco circa 1974 where he could pursue his dreams of writing poetry and live out of the closet as a gay man. Of course some, including Alysia’s grandmother (Geena Davis) did not think this was naturally the best way to bring up a young child (played by Nessa Dougherty as the younger Alysia), and at times neither did Alysia, now without a mom, and whose new blended family consisted of a revolving door of her father’s boyfriends, but Steve was devoted to her and determined to make it all work. This is their story as a single dad tries to cope with bringing up a child alone, and that child tries to find her place in her “daddy’s” life, and a whole new world. Shielded from all of it on vists to her grandmother’s, and naturally inquisitive about everything, she is a charmer, no doubt.

At about the halfway point, the role is taken over by Jones as Alysia is now in high school, with friends of her own who make fun of her dad “liking men”. There are growing pains, even her own lashing out at her circumstance one day calling her father and then-boyfriend Charlie “fags” as her dad leaves the room. Charlie (Adam Lambert) says, “dumb high school friends might say things like that, but Alysia you know better, more than anybody“. Indeed she does and the warm familial connection is what matters most, even as she plans to go off to college at NYU, forge her own life, and even spend a semester in France where she finds young love with a nice French boy, before getting a devastating letter from Dad informing her he is sick, and it is “that disease that affects gay men” that she had heard was emerging. When Steve asks her to come home to help him through it, she has no choice. She has to be there for him as he was for her.

Much of the film are largely snapshots through time, a view of this father and daughter bond, one full of happiness and tragedy, frustration and understanding. Both actresses who share the role of Alysia at different ages, Jones and Dougherty, are excellent with Dougherty a real find and truly irresistible as the young Alysia. McNairy is superb, particularly in a poignant heart to heart scene with his daughter as the ravages of AIDs start to catch up with him . The supporting cast also includes Cody Fern, very fine as Eddie who lives in the loft with them, and Maria Bakalova who manages to make a real impression in a single scene set in the Pharmacy, as does Lambert in his brief scenes as Charlie. Davis is, as always, a welcome presence but her role is not substantial.

Producers are Coppola, Durham, Megan Carlson, Siena Oberman, Greg Lauritano, and Laure Sudrea. It is an acquisition title at Sundance.