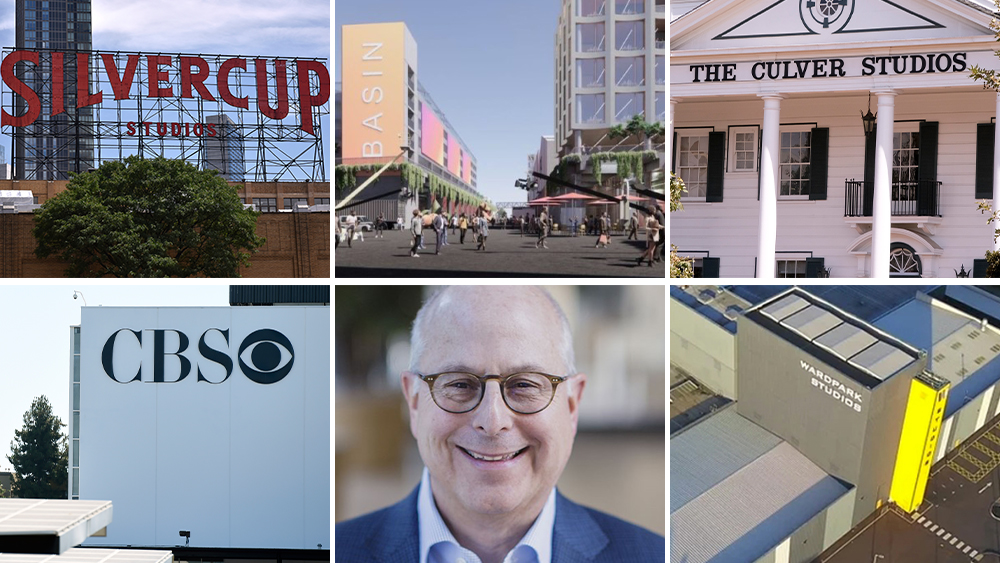 Call it entertainment’s new Space Odyssey. An explosion of streaming platforms, a surge in content and a shortage of space to produce it all has ushered in a frenetic era of building, buying and expanding soundstages. It’s a competitive market, one led by Michael Hackman, founder and CEO of Hackman Capital Partners, credited with turning global studio real estate into a thriving new asset class.

Other Hackman Capital properties include The Culver Studios; Television City; MBS Media Campus; Raleigh Studios in Hollywood and Saticoy; Sony Pictures Animation Studios (in LA); Second Line Stages in Louisiana. Eastbrook Studios in London is currently under construction, as is a state-of-the-art studio complex in Downsview in northwest Toronto. The Wharf Studios, a new campus in London, opens in January.

That’s 16 studios, soon to be 19 when deals close, with more than120 active soundstages and another 90 planned or in development, for well over $10 billion in studio assets.

“In every market where we open, demand has exceeded the supply. At some point that will come into balance,” Hackman said — just not anytime soon.

In a rare interview, the longtime real estate developer tells Deadline how becoming a supporting player for film and TV production was the business opportunity of a lifetime, and when it first started for him in Culver City.

DEADLINE: Hackman is a key player in the entertainment industry, but many Deadline readers may not know you. What’s your backstory?

MICHAEL HACKMAN: I grew up in Columbus, Ohio, one of five children. Two sisters (and my two children) work with me in the business. I graduated from the Ohio State University, moved to L.A. in 1978, and launched my company in 1986, focused on industrial real estate [warehouses, factories] building up a portfolio of more than 400 buildings totaling over 35 million square feet. By 2005, I was on to the next concept, urban infill [developing sites in a market that’s already mostly built out]. I started to focus on Culver City because I lived in L.A. It was dynamic, had three metro rail stops planned, a great future, a great location. We started to buy up buildings, focusing on creative office development. One of our first projects was the 150,000-square-foot creative office campus in the Hayden Tract, which was then leased to Beats by Dre. Then Apple bought Beats.

DEADLINE: That’s a step closer to entertainment. When, why the jump into studios?

HACKMAN: In 2014 we bought The Culver Studios—the historic 1918 site where Gone With the Wind, Citizen Kane, ET, The Matrix and many others were filmed—and embarked on an innovation plan that would modernize and more than double the lot, while preserving the historic structures. Eventually Amazon became our tenant.

At the same time, I met Rick Nelson, CEO of The MBS Group, which provides lighting and grip rental equipment and production services, and also operates film and TV studios. He was based at MBS Media Campus, then called Manhattan Beach Studios. We started to really study the business. Technology and broadband were developing, and it was clear to us where things were headed. We knew there was going to be growth, and that it would be a game-changer.

Then at the end of 2018, we had the opportunity to buy CBS Television City–25 acres in the center of L.A., one of the best locations in the city. We were able do that deal in 2019, a seminal moment, when we also had the opportunity to purchase The MBS Group and the MBS Media Campus [from Carlyle Group]. Once that happened, everything took off. We were now not only able to buy studios, but also able to provide critical services to the content industry. We worked hard with the MBS team to grow their services and footprint. [Editors note: MBS has over 850 employees, services almost 400 soundstages through 65 locations, and supports more than 400 productions annually.]

DEADLINE: How would you characterize the soundstage market?

HACKMAN: Highly competitive. In L.A. there are 500-plus soundstages. Hackman Capital Partners, as big as it is, owns about 70. In New York, there are 255 soundstages, we own 38. We don’t have a controlling position in any one market, and it’s not our intent to do so. We work with many other owners and companies to service their studios.

In each of the major markets like L.A. and New York there’s close to 100% occupancy. They turn over from one show to another. In every market where we open, demand has exceeded the supply. At some point that will come into balance. New York in particular is a greatly underserved market. It needs more stages but also bigger ones. Only about 50 of New York’s soundstages are greater than 15,000 square feet.

[Editors note: A few more will come online with Lionsgate Studios from Robert Halmi and Fehmi Zeko’s Great Point Capital — with the studio as long-term anchor tenant – set to open in Yonkers. And Steiner Studios is branching out from its Brooklyn Navy Yard home to build a second studio complex in Sunset Park, Brooklyn. They are among developers and private equity firms including Hudson Pacific Properties and Blackstone (Sunset Studios in L.A.), TPG Real Estate Partners (Cinespace Studios in Chicago and Toronto, Babelsberg in Germany), Commonwealth Group (Blackhall Studios in Atlanta), and a handful of others who have moved into the soundstage space.]

DEADLINE: Why the boom? Streamers and media companies are spending billions of dollars on content. Is it just that more content is being produced?

HACKMAN: Yes, but not only that. Soundstages are also in demand because of growth in technology as well. You would think it would be the reverse, but technology enables producers to do more on a soundstage than was previously possible. For example, virtual production is becoming a game changer as it allows producers flexibility — they can avoid taking the traveling circus out on location. In general, there’s also significant value to being on a real studio lot where you can control who goes in or out, not to mention controlling production costs and timelines, plus producers have more creative freedom. This has become even more important with Covid. A stage is self-contained, and a studio lot provides the ability to create an ecosystem to satisfy all your production needs within one campus. The studio concept has been around for over 100 years but has become even more important as we go forward.

DEADLINE: You stressed that you are not in the content business?

HACKMAN: We are not in the “content creation” business. If you equate content to mining gold, our business is to supply the pots, the pans and the jeans, all wrapped in a blanket of great service. We want to make sure all of our customers get everything they need to make the best content possible. Our business has grown way beyond property infrastructure to production logistics, and to providing a complete package of turnkey services to our customers. In addition to best-in-class facilities, we are providing tools to help content creators turn their vision into reality.

The first thing that Rick Nelson taught me is that the word “no” does not exist in the world of production. You find a way to make it happen. A big part of what the firm does is production planning and advisory services for content creators, helping them find a home for their shows whether or not it’s on one of our properties.

DEADLINE: Is it fun?

HACKMAN: It’s fun. I grew up in the ’60s and ’70s. I always loved television and movies. Many of the shows I loved were filmed at CBS Studio Center. The business is exciting. I marvel at it. It never gets old for me. I’ve been through so many soundstages, and every time I see the sets, I am absolutely in awe of the talent that exists in this industry. The amount of talent and how hard everyone works below the line is incredible; that is the most impressive part of the business.

Some of the studios we have bought have historic components, and it’s incredibly rewarding to transform them into state-of-the-art facilities. I bring this passion from my real estate background, to really take these iconic studios back to their glory. It’s really thrilling to renovate and rebuild an existing studio, but also to put your footprint on building something new and creative, while helping to positively impact communities and create jobs.

DEADLINE: Explain the studio system of hub and spoke. It’s not just for airlines anymore apparently?

HACKMAN: The hubs would include L.A., New York, Toronto, Vancouver and London. The spokes are markets like Atlanta; Louisiana; Albuquerque, New Mexico; Ireland; Scotland. Spokes can be overflow markets or just smaller up-and-coming markets that can also stand on their own. Jason Hariton, Chief Real Estate Officer of The MBS Group, coined the phrase “hub and spoke” for studio space when he was head of worldwide production operations and real estate for Netflix.

Hariton, whom you could say is a Hackman secret weapon, oversaw 1,000 productions a year at the giant streamer. He’s fourth generation in the business; his great-grandfather was a Hollywood driver, his grandfather worked at Paramount, and his father at Universal. Jason makes sure we are building or buying the right assets in key hub-and-spoke markets, and that we continue to grow that way around the world. All of our company’s success is possible because we have a phenomenal team.

In New York, we have Silvercup and Kaufman Astoria. In Toronto we have two deals, on the waterfront and a large studio on 48 acres. We’re looking for projects in Vancouver, where MBS already manages studios and services soundstages.

MBS has a Canadian group with 200 people, and a group in London of around 150 people, where we have Eastbrook Studios, The Wharf, MBS Innovations Lab and are trying to do more.

In L.A., we have MBS Media Campus, The Culver Studios, Raleigh Studios, the Television City and soon to close on CBS Studio Center. We don’t own production facilities in Atlanta, but MBS services most of them.

DEADLINE: You mentioned a window for soundstage supply and demand to come into balance. How long?

HACKMAN: We are working hard to meet the meteoric demand. The growth in viewership around the world, combined with the increasing access to broadband, will continue to create new customers for streamers in the long term, and major studios in major hub-and-spoke markets will continue to be the important centers for content creators.