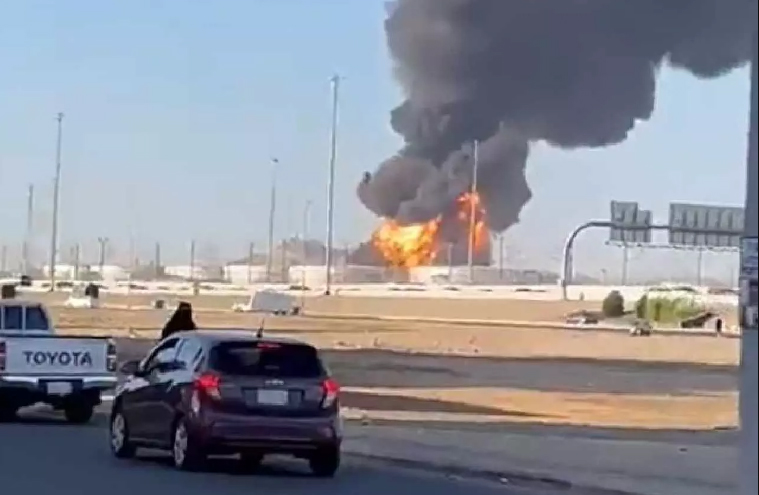 Jiddah: A raging fire erupted Friday at an oil depot in Jiddah ahead of an F1 race in the Saudi city, according to videos. Yemen’s Houthis rebels acknowledged they had launched a series of attacks on the kingdom. While Saudi Arabia and its state-run oil behemoth Saudi Aramco did not immediately acknowledge the blaze, it appeared to be centred on the same fuel depot that the Houthis had attacked in recent days.

The North Jiddah Bulk Plant sits just southeast of the city’s international airport, a crucial hub for Muslim pilgrims heading to Mecca. Videos of the blaze corresponded to known geographic features around the plant.

The Saudi Arabian Oil Co, known as Saudi Aramco, did not immediately respond to a request for comment.

Those at the F1 track could see the large black smoke cloud in the distance. The cause of the blaze was not immediately known.

The second-ever Saudi Arabian Grand Prix here is taking place Sunday, though concerns had been raised by some over the recent attacks targeting the kingdom.

The F1 said in a statement that: “The position at the moment is that we are waiting for further information from the authorities on what has happened.” The F1 management did not elaborate.

However, the al-Masirah satellite news channel run by Yemen’s Houthi rebels said more details would be released later about their attacks. The Iran-backed Houthis did not immediately claim they were behind the Jiddah fire Friday.

Meanwhile, Saudi state television acknowledged attacks in the town of Dhahran targeting water tanks that damaged vehicles and homes. Another attack targeted an electrical substation in an area of southwestern Saudi Arabia near the Yemeni border, state TV said.

The North Jiddah Bulk Plant stores diesel, gasoline and jet fuel for use in Jiddah, the kingdom’s second-largest city. It accounts for over a quarter of all of Saudi Arabia’s supplies and also supplies fuel crucial to running a regional desalination plant.